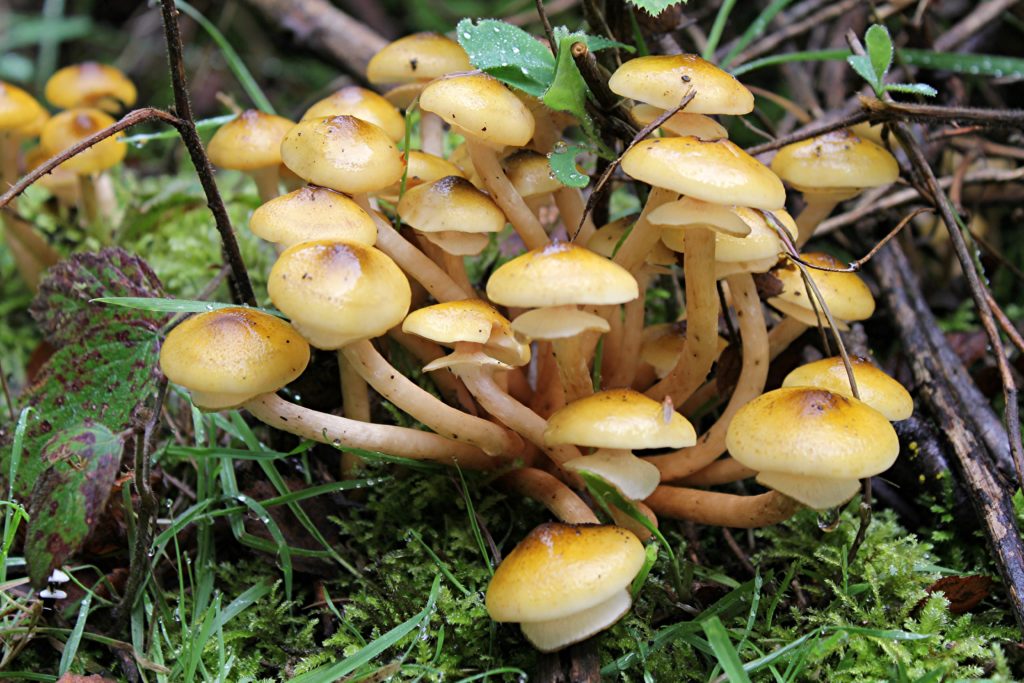 The honey mushroom is scientifically known as Armillaria mellea this fungus is parasitic, resulting in root rot in many plants; this root rot is not just limited to trees and is a bane for gardeners. The honey mushroom can cause extensive damage to wooded areas and forests; the damage frequently occurs before the emergence of the fruiting bodies. The Honey mushroom causes such damage due to the ability of the mycelial threads to attack a tree’s root system and in combination, rhizomorphs that can travel quite some distance to attack neighboring non-infected trees. Following the demise of the tree, the Honey mushroom can reside as a saprophyte for many years [1.]. The Honey mushroom is a common fungus, usually forming dense clusters at the base of trees and is mostly found in the northern hemisphere although, also found worldwide in primarily temperate, but also tropical climates.

The Honey mushroom was first named Agaricus melleus by Martin Vahl in the 18th century; it was reclassified to the Armillaria genus in 1871 by Paul Kummer. The Honey mushroom is also known as Rhizomorpha fragilis, Rhizomorpha subcorticalis,  Honey agaric, Honey fungus, Der Hallimasch, Shoestring root rot, Bootlace fungus, Oak root rot, Stumpie, Stump mushroom, Hazel mushroom or Pinky. Whilst a variety of synonyms, many will refer to the local country where it is found.

Some Honey mushrooms have a bioluminescent capability, with the mycelium but not the fruiting body able to glow in the dark promoting a green light, this is not always visible to the human eye, but is widely accepted as factual.

Cap: Conical when young, becoming convex and then flatter with age; the edges are upturned. From 3 – 15cm in diameter. Golden yellow (like honey) to a red-brown with age. Sticky or tacky when wet. Knob appears on the apex with age. White or pinkish flesh, unchanged when cut.
Gills: Present on hymenium. White and turn pink-yellow or even spotty with maturity.
Stem: White to yellow or red-brown. A ring high on the stem, yellow-edged. Up to 20cm tall and approx. 3cm in diameter.
Smell: Faint but described as acrid or acidic.
Taste: Described as tasty, sweet and nutty.
Spores: Smooth and ellipsoidal.
Spore color: White or pale cream.
Edibility: It is edible with caution; cooking recommended before consuming.
Habitat: Hardwood preferentially; conifers and broad-leaved trees, but also other types of live or dead wood. The Honey mushroom does not just appear on the ground, and it also grows on and within the wood of trees.
Season: September to November typically.
Scientific description: Class: Agaricomycotina; Subclass: Agaricomycetes; Order: Agaricales; Family: Physalacriaceae; Genus: Armillaria and Species: Armillaria mellea.

Until the last few years, there was little scientific evidence in support of the use of Armillaria Mellea for medicinal purposes, despite being used throughout Asia as herbal medicine. It has become evident that the popular wild mushroom, Armillaria Mellea like other mushrooms has bioactive compounds in its fruiting bodies including, polysaccharides, proteins, amino acids, fatty acids, vitamins and minerals. Since 2018 a few studies have focused on the medicinal properties of Armillaria Mellea; however, this is largely performed in vitro, and human studies will be required in the future to confirm the efficacy of Armillaria mellea as a medicinal supplement. Although the results look interesting, it is important to receive professional advice from a medical practitioner before self-administrating any mushroom as a therapeutic. This will ensure that there are no contraindications or possibilities of it affecting any drugs already being taken.

Preliminary and very recent work in vitro has shown that polysaccharides extracted from the Armillaria mellea showed remarkable anti-oxidant ability, at a concentration of at 1mg/ml. The experiment focused on free radical scavenging, and the work is promising but needs to be expanded [2.]. Anti-oxidant compounds are essential to slow ageing, in the management of many health conditions and to prevent DNA damage.

In the same study above, the effects of Armillaria mellea on key immune cells: T lymphocytes and B lymphocytes were observed; these cells are essential and involved in adaptive immunity. T cells are crucial for cell-mediated immunity, and B cells produce antibodies, necessary for humoral immunity. Preliminary findings indicated that in the presence of Armillaria mellea and a molecule that naturally induces cell proliferation, there was a concentration-dependent increase in the number of T lymphocytes (with the addition of Con-A) and B lymphocytes (the addition of LPS). Moreover, macrophage stimulation and activation of phagocytosis were observed in vitro [2.]. This could potentially provide a method of manipulating the immune system, in favor of a specific arm of immunity, depending on the conditions of the patient.

A study recently examined the antitumor effects of a bioactive compound isolated from Armillaria mellea named Armillaridin. Armillaridin was administered in vitro to a human hepatocellular carcinoma (HCC) cell line and was shown to inhibit the growth of the liver cancer cells. Growth inhibition is critical to prevent the proliferation and then spread of a tumor. Furthermore, the ability of Armillaridin to kill cells was confirmed by cytotoxicity testing, demonstrating the potential use of the Armillaria mellea molecule, Armillaridin, as an anti-liver cancer drug, due to its ability to prevent cancer cell growth and promote death [3.].

Sesquiterpenoids isolated from Armillaria mellea were used to assess their ability to counter depression in a mouse model. Interestingly, Armillaria mellea was able to show specific anti-depressant-like properties. In addition, the extract was able to modify levels of key neurotransmitters in the brain of the mice, important for mental well-being, including dopamine. Dopamine is an important neurotransmitter; reductions in levels of dopamine or dopamine receptors can be observed in those suffering from depression. This supports the necessity for further work to establish the viability of the use of Armillaria mellea in depression [4.].

A molecule extracted and isolated from Armillaria mellea, known as a xylosyl, has been proven to significantly suppress the release of inflammatory mediators and cytokines, in vitro [6.]. This provides preliminary evidence for the role of Armillaria mellea as an anti-inflammatory; with further research, this could prove useful as a dietary supplement in the management of diseases characterized by inflammation, such as diabetes and arthritis.

It is advisable to sample a small amount to assess for allergic reactions. The fruiting body is generally consumed; however, the stem is often too tough and discarded. The bitter taste of the Honey mushroom disappears with cooking.