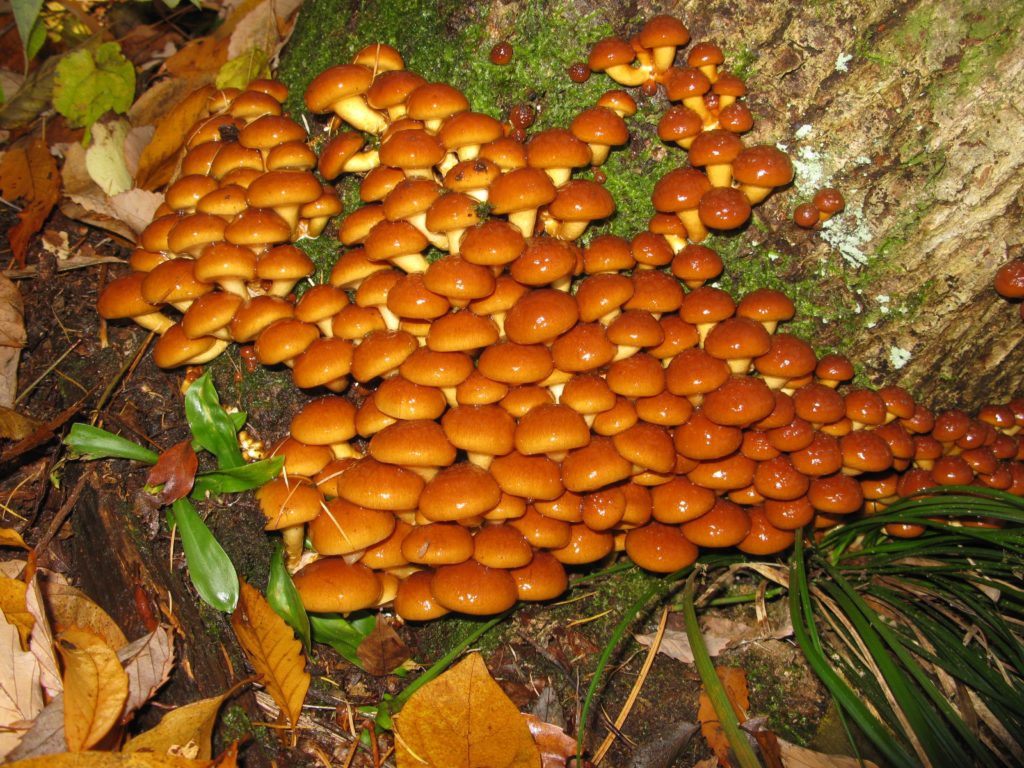 The nameko is also sometimes called the butterscotch mushroom, for its color, or the pholiota nameko. Note that the latter, despite including part of the scientific name, is not the real scientific name of this edible fungus.  Pholiota microspora, frequently misspelled “microspore,” is.

Nameko is an exotic Asian mushroom popular in cooking for its earthy taste, bright orange color, and the gelatin layer on top of the cap, which has a slight thickening effect in soups and sauces[i].  The gelatin is the reason for yet another common name, slippery mushroom. The species grows wild across much of Asia and is widely cultivated for food, especially in Japan but also in other regions, including North America. It is also available in some places in grow kits.

Although nameko’s primary traditional usage is culinary, it is suspected to have a number of medicinal benefits, including anti-inflammatory and anti-oxidant properties[ii].

Nameko is an Asian member of a large group of mushroom species, many of which can only be correctly identified with the use of a microscope[iii]. The definitions of some of these species may be in flux. These are classic-looking mushrooms with round caps, long, centrally-attached stems, and closely-spaced gills that do not run down the stem.

Nameko is not itself known to be toxic, but can resemble unrelated toxic species, such as the Deadly Galerina Marginata[iv], as well as several unrelated edible species. Caution is in order. Nameko Mushrooms fit into an appearance category called “Little Brown Mushrooms” or LBM’s and some people avoid this category entirely because of how hard it can be to differentiate an edible mushroom from a deadly one.

Although the nameko is not among the best-known medicinal mushrooms, preliminary research suggests some medicinal use may be possible.

Both in-vitro and in-vivo tests confirm that polysaccharides extracted from nameko act as antioxidants[v]. However, these tests did not evaluate the extracts as treatments for any disease. Another study looked at a polysaccharide from nameko as a treatment for obesity in rats. The animals used in the experiment did lose weight and showed several signs of increased health in blood tests, including increases in anti-oxidant enzymes[vi]. Chemical analysis also suggests that some nameko polysaccharides could be used in cosmetics on the basis of their anti-oxidant and moisturizing properties[vii].

Nameko polysaccharides also have a recognized anti-inflammatory effect, and have been shown to reduce swelling in the paws and ears of experimentally injured mice, without causing gastrointestinal problems in rats[viii]. Whether the mice were evaluated for gastrointestinal problems, and whether the rats had swelling that the polysaccharides were able to reduce, seems unclear, based on published reports. A separate study showed that beta-glucan derived from nameko reduced inflammation-related pain in experimentally injured mice[ix].

Inflammation plays a role in many serious health problems, so finding safe, effective anti-inflammatory treatments is important, but nameko products appear not to have been clinically tested in human beings for this property.

A preliminary study demonstrated that substances useful in preventing osteoporosis can be extracted from substrate previously used to grow nameko (or any of several other wood-digesting species)[x]. These substances are byproducts of fungal digestion of wood, suggesting that waste matter left over from mushroom cultivation could be used in pharmaceutical production.

Proteins isolated from nameko inhibited the growth of human breast cancer cells, among other potentially beneficial effects. However, this was an in-vitro study, not a clinical test involving patients.

A quarter cup of nameko mushrooms (packed in water and therefore, presumably, cooked) is listed[xi] as having just five calories, mostly from carbohydrates. That’s two grams of carbohydrate, one of protein, and no fat. This mushroom is not a significant source of most vitamins or minerals, the exception being iron; the quarter-cup serving provides almost 10% of the standard daily iron requirement, which is not a large amount, but does make a difference. The only other micro-nutrient even listed is calcium, at 2% of the standard daily requirement.

Some sources claim that nameko is a great source of iron, calcium, and protein, but that is probably because the calorie count is so low. That is, the nutrient-to-calories ratio looks great—a whole meal-sized serving (600 calories, say) of nameko would have 120 grams of protein! But that would be 30 cups of mushrooms, impossible to eat.

As with most mushrooms, the real reason nameko is so healthy is that there isn’t much food in it. Much of the mushroom’s weight is indigestible fiber and water, so it’s a great way to add flavor without adding calories. The fraction that is digestible is quiet healthy, but even for an enthusiast nameko is not going to be a major source of nutrition.

No Nameko product has been approved for medicinal use, nor are any products widely available for alternative medicinal use. Few, if any, clinical studies in human patients have tested Nameko extracts as treatments, nor is there much, if any, research into the medicinal value of simply eating Nameko. So there is no established dose. Anyone wishing to attempt to use Nameko for medicinal purposes should rely on the informed guesses of an experienced practitioner.

Fortunately, there does not seem to be any concern about over-dosing, at least not on the whole mushroom; enthusiasts may eat Nameko freely.

Nameko is not known to have any side effects or toxicity, although individuals can develop allergic reactions to any food. The real danger for foragers and for outdoor cultivators is that Nameko closely resembles the deadly galerina. Proper identification is critical.

[xi]     Nameko Mushrooms (Whole) in Water. Eat This Much