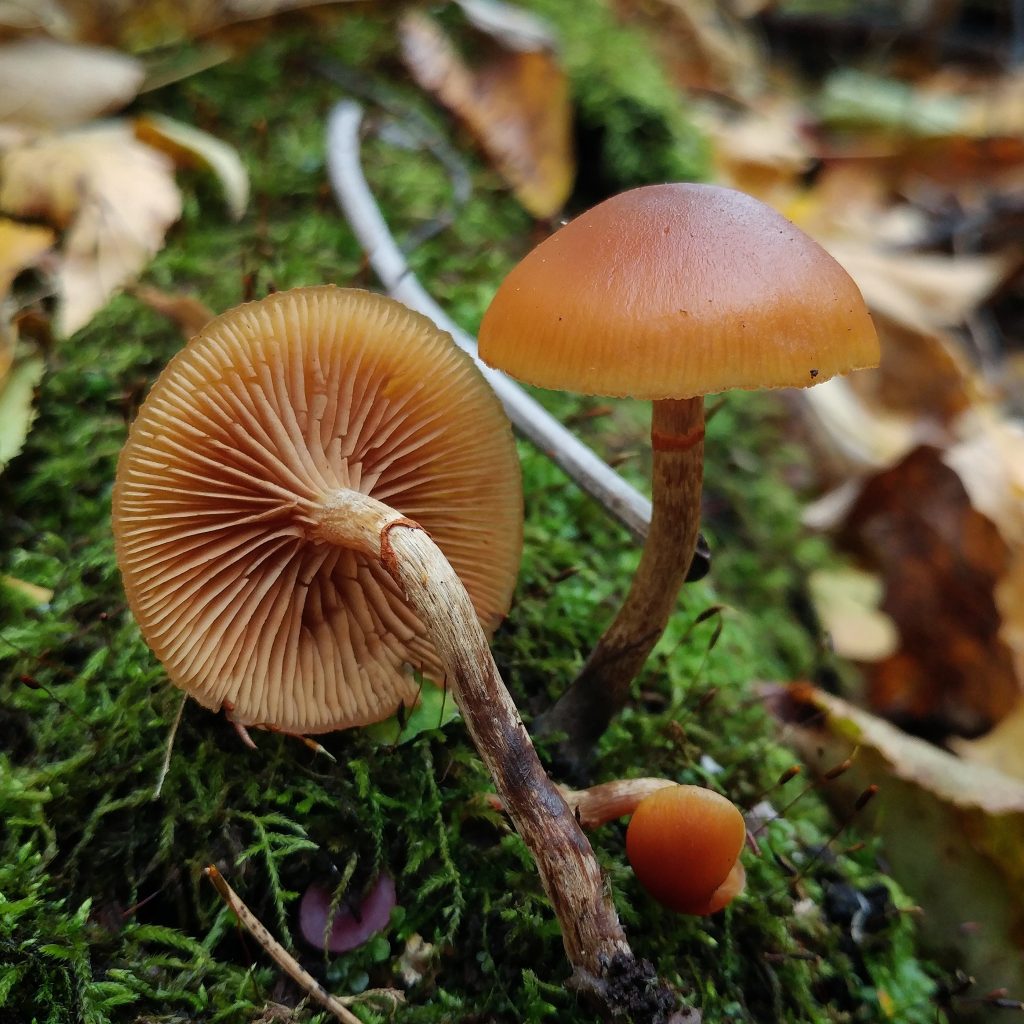 “Deadly Galerina”[i] has such a ring to it, doesn’t it? It has such a pleasing near-repetition of internal sounds, such an appealing rhythm. Unfortunately, it’s also an apt name for a mushroom that is all too easy to die from—it’s not just poisonous, it’s also a close look-alike of many popular edibles and psychedelics. And it’s an excellent example of the principle that one should not trust simplistic rules about edible mushrooms; there is a tradition in some communities that any mushroom fruiting from wood is safe, but the Deadly Galerina fruits from wood and is very much not safe.

The Deadly Galerina is not the only member of the very diverse Galerina genus (several hundred species world-wide) that could sicken or kill an eater, it’s just the only one likely to be eaten[ii]. Most of the others are too small to attract much attention. Unfortunately, this one attractive hazard of a species is also very wide-spread, growing over much of North America and Europe. In fact, while we’ve gotten used to widespread “species” being split up on genetic grounds, this species (also known, rather poetically, as the funeral bell) has been lumped together on the basis of genetic studies. The mushrooms listed in older sources as G. autumnalis, G. oregonensis, G. unicolor, and G. venenata are now all considered part of G. marginata[iii].

It’s an important mushroom to know.

Cap: Very small to small, initially convex but becoming almost flat with age. Sticky when wet. Initially yellow-orange, darkening to reddish or brownish. Dried specimens are very faded and may be two-toned. When young, the margin may have some whitish veil remnants attached. The interior flesh is whitish or pale brown.
Gills: Attached, sometimes extending a little ways down the stem. When very young, covered with a whitish partial veil. Initially yellowish, becoming brownish with maturity. Old specimens may have spotted gills.
Stem: Proportionately medium-length and thin. Can be anywhere in color from whitish to dark brown, darker at the base. There is usually, but not always, a ring partway up. Below the ring, young specimens may have whitish fibrils.
Smell: May sometimes smell a little mealy.
Spores: Somewhat variable.
Spore color: Reddish-brown.
Edibility: Deadly poison!
Habitat: Grows in and on dead, rotted wood (which could be buried and not visible). In some areas, may have a preference for certain tree species, but overall has fairly eclectic tastes. Usually fruits in clusters.

It’s not that the Deadly Galerina has no distinct characteristics. The brown spore print alone sets it off from many of its look-alikes. The problem is that its overall appearance looks so much like so very many other species, and it often grows next to, or even among, groups of those others. People often end up poisoned after properly identifying several members of a cluster as safe, then assuming that the entire cluster of small, brownish mushrooms are alike when actually the Deadly Galerina is hiding, mixed in.

The Deadly Galerina is a LBM (“little brown mushroom”), a catchall term for a great many non-descript species. As such, it is a look-alike for all other LBMs, to a greater or lesser degree. These include edibles such as the various honey mushrooms (Armillaria sp.) and Enokitake (Flammulina velutipes), as well as many of the “magic” mushrooms, especially the Psilocybe and Panaeolus species. Basically, anything small and undramatic-looking could be mixed up with this one, to disastrous results.

There are some poisons known to have medicinal value under some circumstances, but the Deadly Galerina is NOT among them. It does help break down wood, a benefit in a larger, ecological sense.

This mushroom is so intriguingly dangerous that reading about what it does is good for a lovely thrill. Do not express such pleasure out loud, however, or somebody nearby is likely to overhear and say “hey, a buddy of mine died from eating that.”

It’s the same toxin that the more famous destroying angel mushrooms (a subgroup of the Amanita genus) have, a-amanitin. A single mushroom has enough to kill an adult human. What makes this poison all the more frightening is that it is slow. Symptoms don’t show up for at least six hours, sometimes as much as 24 hours after ingestion, long enough that most victims won’t connect their symptoms with the mushroom meal, and won’t think to tell their doctor about the mushrooms when seeking help. And by that time the poison is absorbed into the body anyway.

Symptoms start with a vague unease, developing into severe gastrointestinal upset, which may last for perhaps a day, then spontaneously resolve. The person feels fine, but isn’t. The poison is busy destroying a critical enzyme, RNA polymerase. After another day or two, the liver, which gets hit first because that’s where toxins are sent to be dealt with, starts to fail. Then the kidneys and sometimes the central nervous system go.

There is no cure, no antidote. Doctors can fight the symptoms, supporting the body in clearing the poison, and sometimes they can keep a victim alive long enough to flush the poison and, if necessary, get a liver transplant or a liver-and-kidney transplant, but there are no guarantees.

The bottom line is never eat a single mushroom, particularly not a LBM, without carefully and properly identifying it, individually, to species.