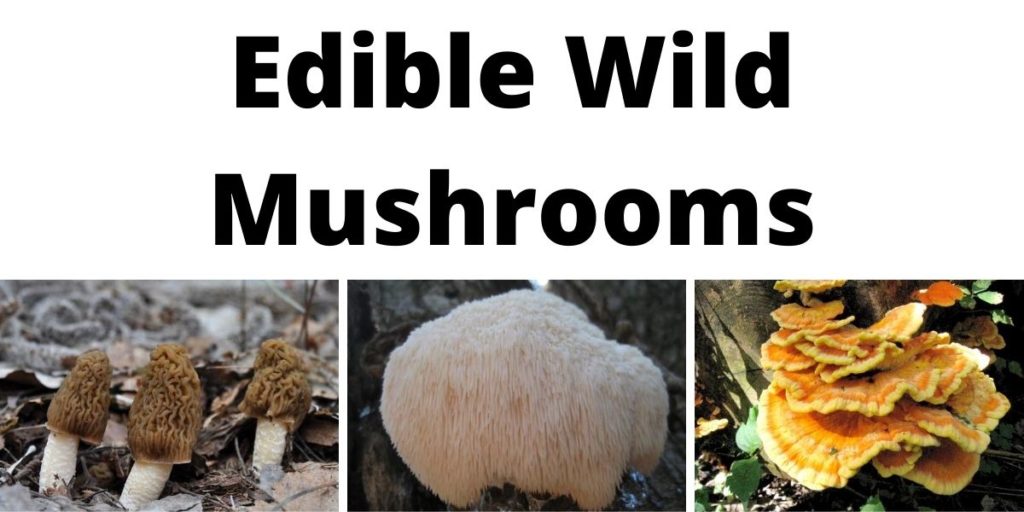 Wild places can be a wonderful source of delicious, healthy food, to those who know their mushrooms—and most of the popular edible wild species are also available commercially. More and more varieties are being cultivated, and in some places it’s possible to buy wild-gathered mushrooms in farmers’ markets and specialty grocery stores. Foraging isn’t necessary for eating wild mushrooms, but it makes a fascinating hobby.

Not that any beginner should read an article like this one and run off into the woods right away in search of dinner. For one thing, there are articles online offering advice that could get people killed, and beginners are not always in a position to sort the good articles from the bad ones. For another, there is a real neurological phenomenon whereby unfamiliar things get kind of glossed-over by the brain; mushroom species that look obviously and entirely different to an expert might appear interchangeable to a beginner, no matter how well-intentioned that beginner might be. This article is not, therefore, a beginner’s guide to finding and eating wild mushrooms.

This article is an introduction to the delicious variety that is edible wild mushrooms. The first step to exploring a world is knowing that world is out there. If you decide to run off into the woods with limited experience after reading this article, please make sure you grab a mushroom field guide or book at the minimum.

Note that several of the mushrooms on this list are actually groups of species. Even so, the list is far from exhaustive—there are far too many excellent edible wild mushrooms out there for one article. But this list does include many of the most popular edible types.

Note that all, or at least most mushrooms should be cooked before eating. Raw mushrooms are almost impossible for humans to digest, and some species are safely edible when cooked but toxic when raw. 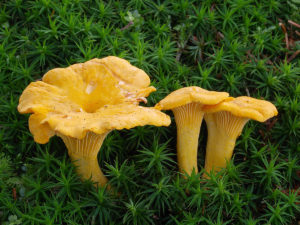 The chanterelles are a family of mycorrhizal fungi (those that live in partnership with plant roots) whose mushrooms all share a vase-like shape and have ridges, rather than gills, on the outside of the “vase.” There are chanterelle species across North America and Eurasia. They vary in color, size, and flavor, but are considered good to excellent table fare. It can sometimes be difficult to tell one chanterelle from another, but the group as a whole is very distinctive and has no toxic members—yet there are species, some of them toxic, that could be mistaken for a chanterelle by beginners or by the incautious.

Chanterelles[i] are perhaps best sautéed in a little oil with onions. The key is to brown them slightly without over-cooking them, a tricky balance that is much easier to strike with young, whole mushrooms. Older, even insect-damaged chants can be chopped and used to flavor a cream sauce or a marinade. Chanterelles take well to pickling (especially young ones, as they will hold their texture better). They can also be dried, but drying does change the flavor, not always for the better. 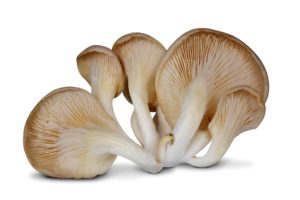 Oyster mushrooms are a group of wood-decomposing fungi whose fruiting bodies are prized for their delicate flavors and textures. Many are reputed to have medicinal value, and some come in beautifully colored varieties, such as pink, yellow, and blue. Most species have a shelf-like or fan-like shape, though some have a thick central stalk. All have gills. There are oyster species in many parts of the would, but individual species can be very local. Fortunately, oyster mushrooms are easy to cultivate, giving hobbyists access to many different kinds almost anywhere.

Oyster mushrooms[ii] do well in stir-fries either alone or with vegetables. Because oysters are quite thin, they cook quickly and should be added after other ingredients, to avoid-over-cooking.

Some popular Oysters include: 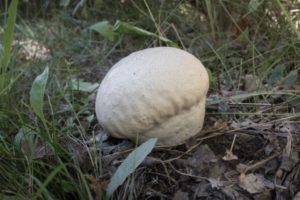 “Puffball[iii]” refers to any mushrooms that are ball-shaped and produce their spores inside the ball, rather than releasing them from exterior structures like gills or pores. At maturity, the ball is entirely filled with spores, like a bag of dust. In some species the ball develops an opening, like a mouth, through which the spores exit. In others, the ball simply breaks open. Puffballs do not comprise a taxonomic group—that is, most aren’t even remotely related to each other, they just coincidentally share the ball shape. Some have stalks, some don’t. Some are very big, some are tiny. Some have petal-like structures surrounding the ball, others are just a ball.

Many puffballs are edible when young, before the spores develop, though there are exceptions—the safer course is always to identify an edible species, rather than trying to learn simplified rules for spotting the toxic exceptions.

There are also other species that can be mistaken for puffballs when young, including the amanitas, some of which are deadly. Slicing the mushroom vertically to check its internal structure is often the only way to avoid such potentially dangerous confusion.

Edible puffballs[iv] are usually treated as interchangeable from a culinary standpoint. Unlike most mushrooms, they should be refrigerated soon after picking; the larger ones may need to be sliced in order to fit, and all will need to be sliced prior to cooking. Puffballs have a leathery rind surrounding the marshmallow-like inner flesh. The rind can be either discarded or retained—it is edible. The interior texture can become unpleasant if not cooked properly. The traditional method is to bread and fry the slices, although pan-frying or even grilling them works very well, too, provided the flesh is nicely browned through. Once cooked, puffball slices can be treated very much like tofu or chicken and worked into all sorts of recipes.

Some popular Puffballs include:

Morels are a group of mostly mycorrhizal fungi whose fruiting bodies have a very distinctive pitted appearance. Size and color vary, but all morels are edible, and most are considered choice. The problem is the “false morels,” several groups of mushrooms that not only vaguely resemble morels (they are mostly wrinkled rather than pitted) but include both edible and toxic members—plus species claimed to be dangerously toxic by some experts and perfectly safe by others.

Morels[v] can be breaded and fried, or they do nicely browned in butter. It’s better to keep things simple, as adding too many other ingredients can overpower the mushroom flavor. Contrary to popular belief, morels should never be soaked in salt water—it’s unnecessary and ruins the flavor and texture. As for preserving the mushrooms, they dry very well and reconstitute beautifully in water, broth, or wine.

Some popular Morels include: 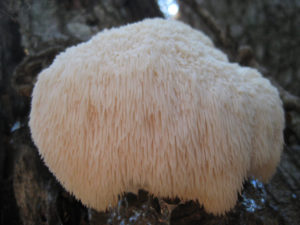 Lion’s mane and its close relatives are very distinctive, being entirely covered with long, hairlike, soft spines. They are white or whitish and grow from dead or dying wood. Surprisingly, the spines do not seem at all hairy in the mouth, and the flavor is slightly but definitely fish-like. Although it’s possible to mix up species within the Hericium genus, the group as a whole has no look-alikes, toxic or otherwise. Lion’s mane is reputed to have medicinal qualities.

Lion’s mane[vi] and its relatives are more or less interchangeable from a culinary perspective, though lion’s mane is the only one of the group regularly cultivated. Unfortunately, cultivated specimens tend not to have much flavor. Wild lions have a flavor and texture so close to that of crab that they can be made into vegetarian crab cakes. Many recipes that normally feature crab or fish can be adapted for lion’s mane mushroom. Those looking to keep things simple can slice the mushrooms and fry them in butter or steam them and then serve them with drawn, herbed butter.

Lion’s mane gets along well with butter.

Chicken-of-the-woods[vii], or sulfur shelf, is actually several extremely similar species[viii]. They all have the same common name because until relatively recently they were thought to be a single, somewhat variable, species. They eat wood and can kill trees, with each species favoring different kinds of trees. The mushrooms appear as semi-circular shelves of yellow, orange, and sometimes white, usually in groups on the trunk of the tree. Rather than gills, these mushrooms have small pores on their undersides. Depending on species, the whole mushroom might be edible, or only the outer edge might be (the center being tough or even woody).

Although chicken is often considered a “foolproof” edible, because of its very distinct appearance, some of the chicken species are mildly toxic for a sizable minority of people[ix]. There are also some vaguely similar species that could be confused with chicken and that are unpalatable.

Chicken, not surprisingly, tastes like chicken, at least to some eaters. The texture, too, is poultry-like, to the point that this mushroom can replace chicken in most recipes. It also makes an excellent addition to an omelet.

Maitake is also called hen-of-the-woods, but as it has nothing to do with the unrelated chicken-of-the-woods, and little to do with actual hens, the Japanese name maitake seems better. By any name, this species often fruits on tree stumps in dense clusters of overlapping gray leaf like structures. It has several fairly close look-alikes, but none of them are poisonous. Maitake is edible, and reputed to have medicinal benefits.

Although maitake grows in large clusters that that must be cut smaller to cook, leaving the pieces as large as possible gives the cooked mushroom an almost steak-like weight. Grilling the “steaks” under grill a press increases their solidity and caramelizes them wonderfully[x]. Another option is to cut the maitake small and then pan-fry the pieces with onion, garlic, fresh turmeric, and rosemary. At the last minute, add cheese (use a wooden spoon to scrape any melted cheese free of the pan as everything cooks). The cheese caramelizes, fuses to the mushroom, and absorbs and amplifies the flavors of the mushroom and herbs. Serve with pasta or bread.