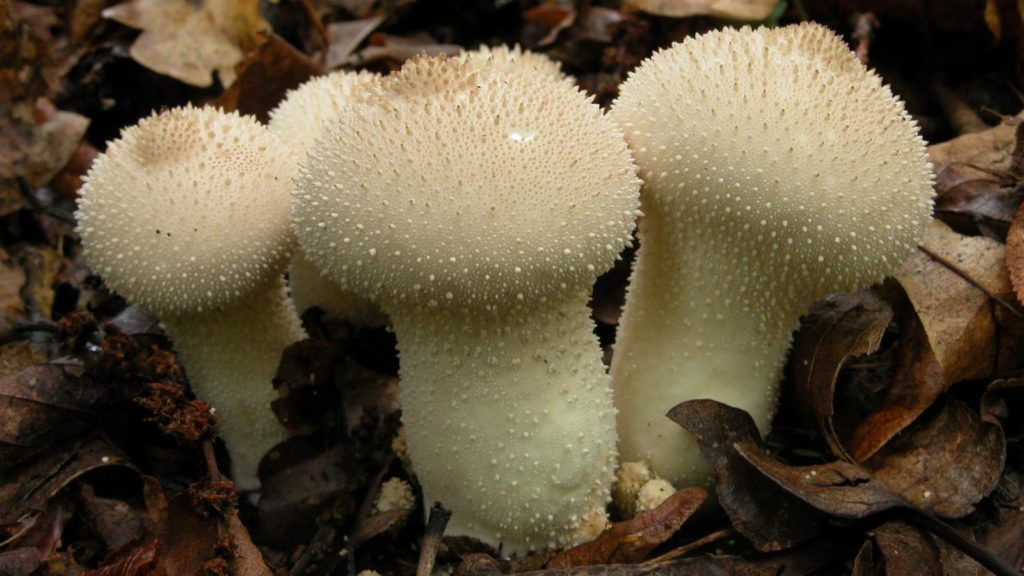 Lycoperdon perlatum is also known as a common puffball mushroom, a gem-studded puffball, devil’s snuff-box and warted puffball. Lycoperdon literally translated means wolf farts, and this name is used for other puffball species as well. The spores are blown from the top of the common puffball on maturity, hence the literal translation.

Lycoperdon perlatum was described in 1796 by Christiann Persoon, since then it has acquired several other synonyms including Lycoperdon gemmatum Batsch, Lycopredon perlatum var perlatum Pers., and Lycoperdon bonordenii Massee [1.]. The Common Puffball is a ‘common’ mushroom, found amongst other places on commons. Its surface is covered in various sized pearls or warts; these warts eventually fall off, leaving a brownish mark behind.

The Common puffball can grow alone, but often will be found growing in groups. Lycoperdon perlatum may be the most common puffball in Northern America and is relatively easy to identify. It is widespread throughout Europe, Asia in addition to Africa, Australia and Central America. The season for harvesting starts in July and ends in November, maybe later in warmer climates.

Fruiting-body: 3 – 6 cm in diameter; up to 9cm tall. Pear or round-like and may have a flattened top. The flesh is white and marshmallowy, but becomes brown and has a powdery texture as the spores are produced. The warts are spine shaped with a wide base becoming narrower at the apex.
Gills: Non-gilled mushrooms
Stem: The stem is white and tapered under the fruiting body and also has warts on it.
Smell: Mild tasting.
Taste: Non-descript taste but works beautifully in dishes with other mushrooms. Some suggest it is slightly sweet, and due to its spongy texture, it picks up flavours from other ingredients.
Spores: Spherical; under an electron microscope, they had ‘rodlet’ patterns.
Spore color: White when immature gradually turning a yellow-brown.
Edibility: Edible. It is suggested that the mushroom should be eaten while it is still young and the flesh is still white before it has turned brown or the spores have changed from their white color. The puffball should be cut in half and the color of the flesh examined before consuming.
Habitat: Found in all types of woodland areas, especially near hardwoods and conifers. Grows on most grazing lands, commons and heaths, and roadside or in urban areas.
Phylum: Basidiomycota; Class: Agaricomycetes; Order: Agaricales & Family: Agaricaceae

There are fungi shaped like balls called Earthballs (Scleroderma citrinum) that look similar to the Common puffball; the difference being that the Earthballs are inedible and may cause poisoning if ingested by humans or animals.

Healing properties and prevention of bleeding

North American Indians used puffballs for medicinal purposes, in particular as a styptic (able to stop a wound bleeding when applied). The soft, centre of dried and immature puffballs, when broken up and then applied onto the broken skin or wound, helps to prevent continued bleeding. The Cherokee Indians also used it as a healing agent for sores [5.]. It is also reported that the fibrous mass that is left after the spores have escaped the puffball can be used as a wound dressing.

Reactive oxygen species can cause extensive damage to cells, so the search for biologically active compounds to mitigate the effects continues. The antioxidant properties were considerable when water extracts of Lycoperdon perlatum were examined compared to other mushrooms, showing the highest radical-scavenging activity (43.2% at a dose concentration of 4.0mg/ml) [6.].

Lycoperdon perlatum are edible mushrooms; however, only when they are young, and the flesh is still white. The presence of trace metals in some cohorts of collected mushrooms may limit the consumption volume; however, there is no standard recommended dosage as there will be batch differences.

Do not self-administer Lycoperdon perlatum as a substitute for conventional medicinal treatment. Always seek medical advice if pregnant before taking any food supplement. Lycoperdon perlatum it is not a replacement for traditional medicine it is essential to seek and adhere to medical advice before supplementing the diet for medicinal effects. Lycoperdonosis is a rare respiratory condition that may come about following inhalation of large quantities of spores from mature puffballs [7.] including Lycoperdon perlatum. Lycoperdon perlatum mushrooms sourced from Turkey were not considered edible despite having excellent antioxidant properties, this followed an examination of the fruiting bodies after microwave digestion revealed high levels of heavy metals including Iron, Zinc, Potassium and Magnesium [6.]. Analysis of Polish mushrooms also identified the presence of high levels of mercury [8.].