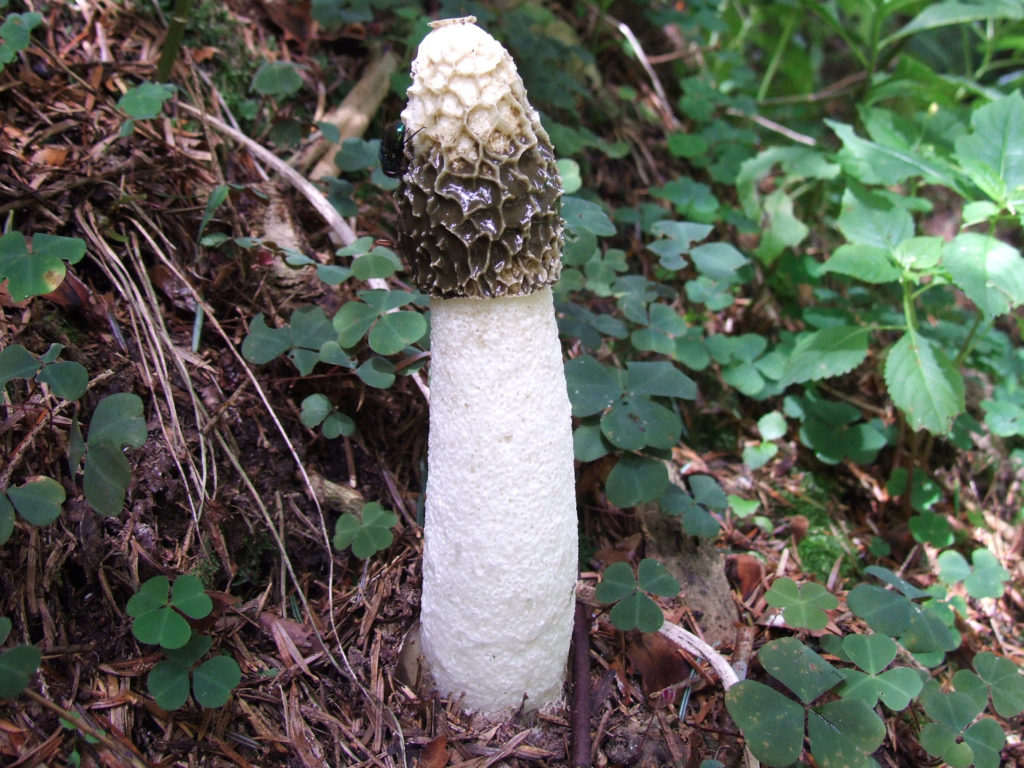 Some mushrooms resemble human penises; it is a fact generally unmentioned by polite society, but difficult to ignore, especially for species like Phallus impudicus, which is actually difficult to describe any other way[i]. Mature specimens look like an unusually long and somewhat thin penis, and they don’t look like anything else. That the species has a habit of suddenly fruiting in otherwise-respectable lawns and gardens only adds to the social awkwardness. Its scientific name literally means “immodest penis,” and “penis mushroom” is one of its common names, so it’s not like anyone has not noticed the resemblance.

That is why readers are encouraged to get their giggles out of the way now, so we can get on with discussing a mushroom that is also interesting for other reasons. There will be no off-color puns or innuendos here.

Another common name, “common stinkhorn,” refers to the species’ scent rather than its shape; stinkhorns as a group are notable for having spores that are dispersed by flies rather than by wind, and the mushroom recruits flies by mixing its spores in a layer of slime that smells very strongly of rotting animal flesh. The spores and their slime are exuded by the outer surface of the cap, making it appear smooth. Once most of the slime has been removed by flies, the cap surface is revealed to be pitted, very much like a morel—stinkhorns are even referred to as morels in some older sources. The names Penis Mushroom, Common Stinkhorn and Phallus impudicus all refer to the same mushroom and will be used interchangeably throughout this article.

Phallus impudicus grows across North America and Europe, and despite its scent at maturity, it is edible, especially when young. It is even popular in some parts of Europe. It also has some traditional medicinal uses, and while some of these are doubtful, there is evidence that it could be used to prevent thrombosis in breast cancer survivors[ii].

Cap: Small, cone-shaped, and initially covered by a smooth layer of greenish-brown slime. The slime is gradually carried away by insects, and without it the cap is pale, yellowish, and pitted.
Gills: There are no gills. The spores are produced on the cap surface.
Stem: Long, thin, whitish, and hollow.
Smell: Very strong carrion-like scent when mature.
Taste: Not distinctive for identification purposes.
Spores: Elliptical to oblong. Smooth.
Spore color: The spores are thoroughly mixed with dark slime.
Edibility: Edible, but opinions vary on taste.
Habitat: Feeds on woody debris in open areas, including lawns, gardens, woodchips. Can fruit either alone or in groups, summer to fall.

The stinkhorn[iii] is another that can be easily mistaken for a morel, at least once the spore-filled slime has been carried away by insects. And while morels can be differentiated from most of their look-alikes by their hollow stems, stinkhorns also have hollow stems. But stinkhorns usually retain at least a trace of slime. A cup of whitsh tissue, the volva, is usually visible at the base, a feature neither the morels nor their other look-alikes have.

Amanitas, too, have a volva at the base. Both amanitas and stinkhorns are encased in a universal veil in their button stage, when they closely resemble, and are usually referred to as, eggs. As the developing mushroom expands, the shell-like veil breaks, leaving only the cup-like volva at the stem base and sometimes remnants on the top of the cap (in the case of stinkhorns, this remnant can look like a hat). It is in the egg stage that common stinkhorns are most commonly eaten, so foragers should be careful not to gather amanita eggs instead—some amanitas are dangerously toxic. The most certain way to check is to slice the egg open, top to bottom; stinkhorn eggs look very different from amanita eggs inside.

A stinkhorn can grow from egg to maturity in just a few hours.

The common stinkhorn is not a popular mushroom; most people know it, if they know it, as the obscene-looking thing that suddenly appears among their nicely-mulched shrubbery. But stinkhorns are among the fungi that convert mulch to food plants can use, and there are other ways the species can be used as well.

The common stinkhorn is edible, especially in its egg stage, before the scent becomes strong. Unfortunately, very few people in the US or Europe have anything good to say about the experience of eating it “like old dust” was a relatively kind description of the taste[v]), which could explain the lack of available information on its nutritional content. However, there are other edible stinkhorns, at least one of which, the bamboo mushroom[vi], is very popular in China, where it is said to be delicious (non-Chinese mycophiles often find it as icky as any other stinkhorn). Its nutritional facts are easy to look up.

The bamboo mushroom is very healthy to eat[vii]. Not only is is low in fat, like most mushrooms, it also has a decent amount of protein (about 6 g. in a 28 g. serving) and is a good source of both vitamin C. and iron. If the common stinkhorn is similar, maybe it is worth learning to enjoy?

The Common Stinkhorn has a long history of use in Europe, mostly as an aphrodisiac or to cure erectile dysfunction (presumably because of the shape), but also for a number of other complaints[viii]. Modern research has not yet supported the traditional uses, most of which probably don’t actually work, but the species does show promise in the treatment of certain cancers[ix]; it is known to have anti-tumor properties, to reduce metastases in certain carcinomas, and to lower the risk of thrombosis associated with cancer. Whether eating stinkhorn, as opposed to the use of concentrated extracts, could be effective against cancers is not clear.

So far, stinkhorn has not been made into an approved, mainstream medicine. It is used by some herbalists and homeopaths[xi]. If attempting to use stinkhorn medicinally, talk to an experienced practitioner. Stinkhorn eggs can be eaten freely as food.

Common stinkhorns are considered non-toxic. No other stinkhorn is known to be poisonous, either, though there may be species that have not been evaluated and whose status is therefore not known. It’s also always possible for individuals to have allergies or sensitivities to otherwise safe foods.

The main danger for stinkhorns appears to be misidentification, as they could be confused with amanitas when very young or with verpas when very old.

6 thoughts on “Phallus impudicus: All About The Stinky Penis Mushroom”