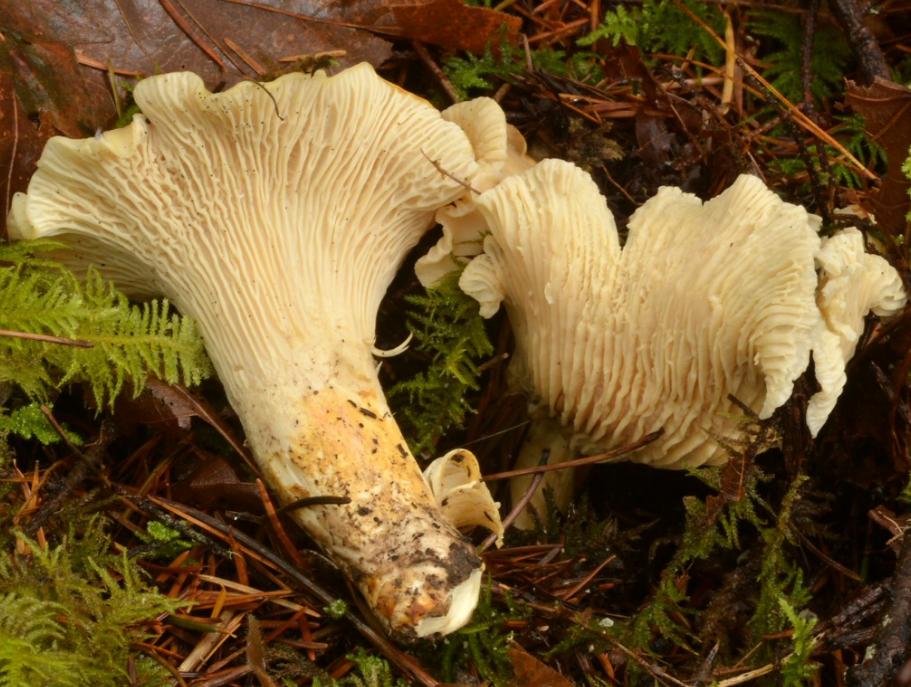 The white chanterelle[i] is a choice edible mostly found in the Pacific Northwest of the United States. It differs from other chanterelles in its whitish color and in its scent—unlike most, it does not smell like apricot. All parts of the mushroom are whitish but can discolor to yellowish or orangish. The White Chanterelle goes by it’s scientific name Cantharellus subalbidus.

While the white chanterelle is not generally considered medicinal, it is a healthy food. Some claims for medicinal value have been made for related species[ii].

Cap: The cap is not distinct from the stem, which simply flares open at the top like a trumpet. May become irregular in shape with age. Sometimes large. White or whitish, bruising yellowish to orangish.
Gills: There are no gills. Instead, there are low ridges, often called false gills, that run partway down the stem.
Stem: Not structurally distinct from the cap—widens gradually from the base. Relatively short, solid, white. Bruises yellowish or orangish.
Smell: Fragrant, but not fruity.
Taste: Not distinct for identification. Not peppery.
Spores: Ellipsoid, smooth.
Spore color: White.
Edibility: Considered choice.
Habitat: Mycorrhizal on Douglas-fir and other conifers. Fruits alone or in scattered groups.

Chanterelles of all types are often mistaken for non-chanterelle species; the key is to remember that chanterelles don’t have gills or a distinct cap. Rather, a stem-like structure flares outward like a trumpet. Low, branching ridges on the outer surface of the trumpet’s bell release the spores. If a mushroom has gills (even short gills) and a distinction between cap and stem, it is not a chanterelle.

The primary use of Cantharellus subalbidus is culinary, and they make a healthy—and reputedly delicious—food. Like most other mushrooms, they have a lot of water weight, meaning that they wouldn’t make a very good staple food; it would be difficult to eat enough of the stuff to come close to meeting daily nutrition needs. But by the same token, the mushrooms can add a lot of flavor to a meal without adding a lot of calories. A typical serving provides a little protein and fiber, but no fat[iv]. As to vitamins and minerals, they may be present, but not in nutritionally meaningful amounts.

White chanterelles are not currently used as medicine, so dosage is not an issue.

White chanterelles are not toxic, nor are any other chanterelles known to be toxic—though, like any other food, it is possible some individuals could have an allergic reaction or other issue. But foragers should be cautious, since some vaguely similar mushrooms are at least mildly toxic.