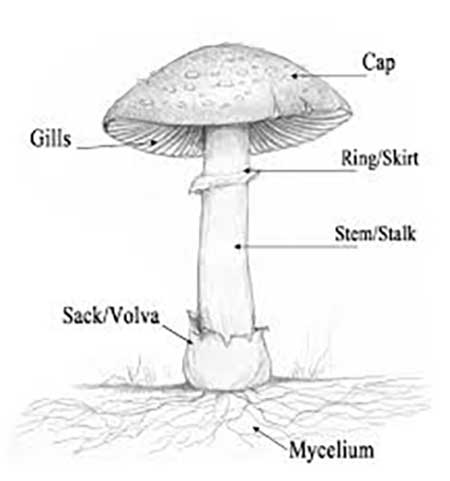 Learning to identify mushrooms gets a lot easier once you know what all the parts of the mushroom are called and how they are described—some of these terms are easy to figure out from context, but others require a bit of an introduction. We’re here to provide that introduction.

Before we get started, though—what is a mushroom?

There are various definitions, but ours is broad and simple; a mushroom is any fungal fruiting body that can be picked (as opposed to, say, the fuzz on your yogurt in the back of your fridge).

Fungi are their own kingdom, alongside plants and animals (and several other, less-familiar groups). Aside from being unable to move, they’re more like animals than plants, but really they are their own thing. There are many types, they’re a very diverse group, but those that form mushrooms belong to just two phyla—and most belong to just one class in one of those phyla.

These fungi live as networks of fungal threads, mostly inside their food where they are hard to see. The threads are called hyphae (singular: hypha). The networks are called mycelia (singular: mycelium). Fungal reproduction happens in two phases. First, a fungus has sex by merging the tip of one of its hyphae with a hypha from a different individual of a compatible mating type. Their baby grows out from that point of merger. Then, much later, when the baby is ready, it produces one or more fruiting bodies—organs capable of producing and dispersing spores.

In some species, this fruiting body is what we call a mushroom.

Parts of the Basic Mushroom

“Your basic mushroom” in this case means the ones that are shaped like an umbrella and have gills. Ask someone to describe a mushroom to you, and this is almost certainly what you’ll hear about. These are the mushrooms traditionally called agarics. At one time, they were thought to be closely related, but microscopic examination showed otherwise and split up the group (there is still an Agaricus genus, but it’s much smaller than it used to be). There are many other ways to be a mushroom, though, and we’ll address them next.

The cap is the top part, the part that isn’t the stem. The technical name for the structure is “pileus,” but even experts often say “cap.” The shape of the cap is an important identification characteristic, yet the shape changes as the mushroom develops and ages—in many species, the cap is initially ball- or bell-shaped, and then it gets wider and flatter, very like an umbrella opening. An otherwise flat mushroom cap may have a raised area in the middle, called an umbo, or the center can be depressed.

Besides shape and color, other details to watch for include surface texture (shaggy, scaly, warty, slimy, or smooth) and the thickness, color, and texture of the interior flesh.

The gills are vertical plates that hang in a radial pattern on the underside of the cap. They look a bit like radiator fins. The spores (dust-like particles from which new individuals can germinate) are produced on the gills—as the spores mature, the gills may appear to change color, since you’re seeing the color of the spores on the gill surface.

The structures known as veils complicate identification in a number of species, since they change radically as the mushroom grows. Not all mushrooms have these structures, but many have one or both veils.

The universal veil completely encases the mushroom when it first appears, rather like the shell of an egg. In fact, a young mushroom encased in its veil is called an egg. As the stem lengthens, the veil is torn. By maturity, there could be no remnant of the veil at all, or it could persist as a cup of tissue around base of the stem (the volva) or as pieces of tissue stuck to the top of the cap or both. In some cases, the volva might be just pieces of tissue, or even powder, clinging to the base of the stem. Whether there is a volva and what it looks like is important for identification, but these structures can be broken off by rain drops or by small animals, so their absence is not a reliable field mark.

The partial veil covers the immature gills, stretching from the stem to the rim of the cap. In some species it is a solid sheet of tissue, while in others it may be only a few cobwebby strands. As the cap expands, this veil, too, tears. Remnants may remain as ragged pieces hanging from the rim or as a ring of tissue around the stem (the annulus, though many people just call it a ring). The ring may be well-developed and obvious, or it may be little more than a zone of a different color or texture than the rest of the stem. The presence and structure of the partial veil remnants are important field marks, but their absence is not—these structures, too, can break off.

“Rhizomorph” litterally means “root-shaped thing.” Some species of fungus have root-like structures, either associated with the mushrooms (as if they were the mushroom’s roots) or as structures within the mycelium.

The classic umbrella shape is what some mushrooms look like at maturity—but of course not all mushrooms are mature! So it’s important to know the anatomy of the immature stages as well.

When a mushroom begins its development, it is a pin—just a tiny knot of tissue on the surface of the mycelium. The next step is the button, a small, round thing that contains the entire structure of the mushroom but has a very different shape because the stem and the cap have not yet expanded. A button encased in a universal veil is an egg. As the stem elongates, the young mushroom rapidly becomes more adult-looking, but until the partial veil (of any) breaks, and until the cap finishes expanding, it won’t look quite how it does is field-guide illustrations.

Other Parts of Other Mushrooms

There are many mushrooms that have the classic umbrella shape but lack gills. The spore-bearing structure (the technical term for any kind of spore-bearing mushroom structure is hymenium) is still under the cap, but may consist of either soft spines (sometimes called teeth) or a flat surface pierced by pores. Those pores are the ends of tiny, vertical tubes. The spores are produced inside the tubes. The color of the pore layer and the size of the pores are important features Some species have both pores and spines. Some have both pores and gills. Umbrella-shaped mushrooms with pores are called boletes; like the agarics, these were once considered a single genus, but the group has since been broken up.

There are also mushrooms that have shapes other than the classic one.

Chanterelles and their kin lack a clear distinction between stem and cap. Essentially, the top of the stem simply expands like the bell of a trumpet. The spores are borne on the outer surface of the bell, which may be smooth or ridged, depending on species. In a few, the ridges are high enough as to resemble gills. Most people still refer to these mushrooms as having stems and caps, despite their distinctive structure.

Morels and their kin do have a distinction between stem and cap, but the spores are born on the outside of the cap, which may be pitted (morels) or wrinkled (false morels) to increase surface area. These mushrooms are cup fungi, a group that more often are simply cup-shaped, with the spores borne on the inside surface of the cup—a morel is basically a crumpled-up cup.

Club and coral fungi lack caps entirely. They are simply branched or unbranched spikes that bear their spores all across their surface.

Some stinkhorns also lack caps—some have very strange shapes, such as branched tentacles. Others have caps. In either case, the spores are produced along with a greenish-brownish slime called gleba that serves to attract the flies that disperse the spores. The word, gleba, also refers to the developing, marshmallow-like spore mass inside a puffball. Puffballs don’t have caps, though some have stems. Some puffballs release their spores simply by breaking apart, but some have a single pore that opens at maturity.

Then there are the shelf fungi that may or may not have stems—if they do, the stem is on the side, like the handle of a fry-pan. Some may consist of multiple shelves, like a mass of leaves or feathers. These can bear their spores on gills, pores, or spines, depending on species.