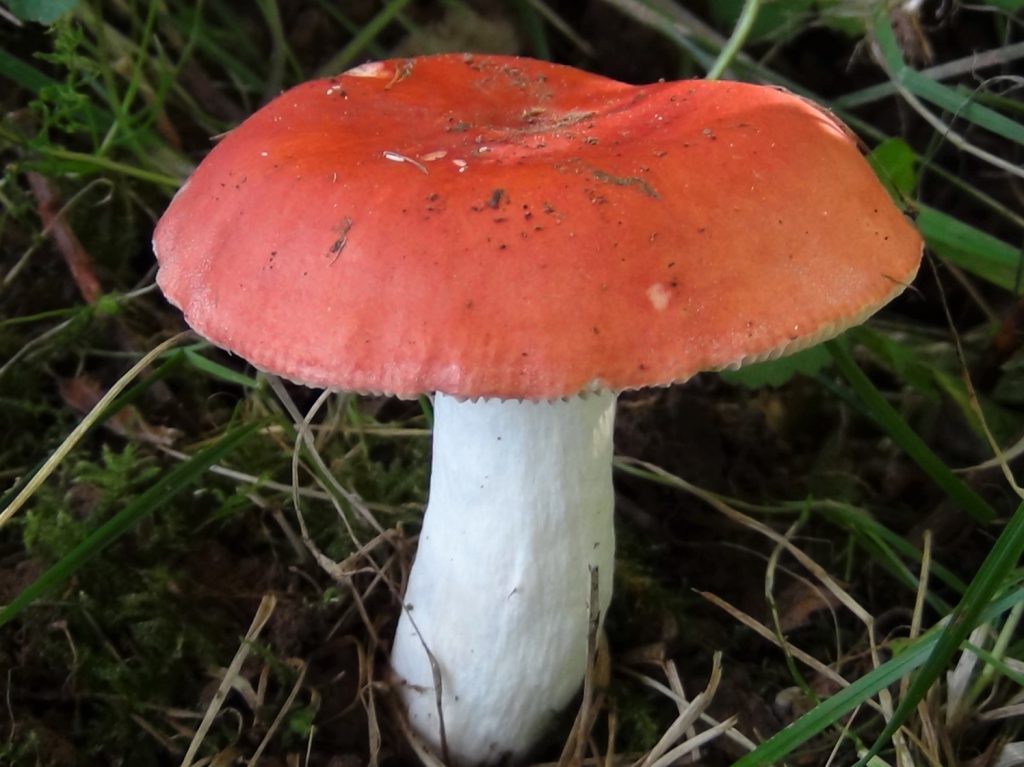 Russula emetica, also known as the “Sickener”, is a type of medium to large, red or reddish, poisonous brittlegill mushroom that is commonly found in the Northern hemisphere.[i]

This species was first described and named Agaricus emeticus by the notable German mycologist Jacob Christian Schaeffer in 1774, and was recategorized into the Russula genus in 1796 by Christian Hendrik Persoon. Its current name highlights its two characteristics, “Russula” meaning red or reddish, and “Emetica” meaning vomiting inducing.[ii]

The Northern hemisphere contains a wide variety of Russulas, also known as Brittlegills. The mushrooms of this genus are some of the prettiest of the woodland fungi and are often of great interest to mycophiles. Unfortunately, they are notoriously difficult and sometimes even impossible to differentiate, especially by sight, due to their extremely variable appearance. It is purported that only 5% of the 750 or so brittlegill species can be identified solely by physical characteristics with any degree of confidence. Therefore, to correctly identify Russula emetica requires careful examination of not only the color of its spore print, colors of its cap, details of its cap edge, taste, smell, whether the surface layers of its cap can be peeled away, but also the reaction of the flesh of the fruiting body to various chemicals, and even certain microscopic details (which often compounds, rather than alleviates the confusion).[vi]

Cap: The cap of this species is approximately 10 centimeters across. While young its is rounded, but as it matures it becomes slightly convex or flattened, often with a shallowly depressed center and upturned margins. The margins are marked by radiating lines, or striations, which fade with age and by small, rounded, and irregularly spaced warty bumps. The cap is sticky or viscid when wet and smooth when dry. The color of the cap is highly variable; most literature states that the cap of Russula emetica is bright red (scarlet) to pink, and sometimes mottled with patches of yellow.
Furthermore, the cuticle, which refers to the outermost layer of the cap, is said to be characteristically “readily peeled” in this particular species when grabbed between the thumb and a finger. Unfortunately, this is a highly subjective characteristic that is likely to vary substantially.
Flesh: The flesh of the cap is white to off-white, with the exception of flesh right under the cuticle which tends to be pink. As these are “brittlegills”, their flesh is soft and brittle, crumbling like cheese.
Gills: The gills are crowded and can either be free or broadly attached to the stem. They are pale cream to yellowish-white in color and are very thin and brittle to touch.
Stem:  The stem can be up to 10 centimeters long and 2.5 centimeters wide. It is cylindric in shape, often widening towards the base; and becomes hollow with age. The color and texture of the stem is white and smooth to slightly wrinkled. Like the cap, the stem is also very brittle.
Spores: The microscopically the spores of this species are ellipsoid to oval. They are 8-11 x 7.5-8.5 micrometers in size. Spores are often reticulated or ornamented with little spines and ridges. However, it is important to note that ornamentation and reticulation is drastically variable.
Spore Print: The spore print of Russula emetica is white to very pale yellowish white.
Smell: This species is purported to have a faintly fruity smell.
Flavor and Edibility: Russula emetica is said to have acrid, hot, peppery taste and, as its name suggests, is a potent emetic if consumed. As such, most mycologists advise against eating Russula genus in general. Although certain authors suggest that Russula species become harmless after thorough cooking and in certain European countries they are even collected for eating. Nonetheless,  Russula emetica is considered poisonous.
Habitat: This species grows from mid-to-late summer (July) to fall (October) singly or in groups on the ground in mossy areas of coniferous (chiefly pines and spruces) or mixed woods; rarely it can be seen growing on well-decayed wood and in sphagnum bogs.
Range: Russula emetica is very common and is widely distributed across all of continental North America as well as across Europe, British Isles, Asia, and even Australia.

There are over one hundred species of the Russula genus and their differentiation is very difficult. So difficult in fact that some mycologists even advise calling simply call every red-capped Russula you find “Russula emetica” and avoiding consumption.

In the Norther Hemisphere several poisonous species of the same genus can frequently be mixed up with The Sickener as they can frequently be found even growing together. These species include R. nobilis (beechwood sickener), R. luteotacta, and R. fragilis, which have similar red caps and white stalks and gills. Similar mix-ups can occur across Asia with species such as R. foetens, R. japonica, R. omiensis, R. senecis, and R. subnigricans.

The differentiation between the red-capped Russulas is once again exceedingly difficulty and requires microscopic and chemical analysis, and even then some mistakes can occur. Thus it is best to avoid consumption of any red capped brittlegill unless you are 100% sure of its identity.

As its name suggests, the “sickener” does make individuals quite sick when Russula emetica is consumed raw or is inadequately cooked. The toxins contained within this mushroom are not yet well known, but are thought to be sesquiterpenoids that are also found in other poisonous genuses such as Lactarius. Furthermore, certain authors suggest that not all people are affected by these sesquiterpenoid toxins to the same degree.

Symptoms of Russula emetica poisoning usually occur within 30 to 45 minutes after consuming the mushroom. The symptoms are mainly gastrointestinal in nature, and include nausea, vomiting, colicky abdominal pain and cramps, as well as diarrhea. These symptoms persist for several hours and resolve after the ingested material has been completely cleared from the intestinal tract. In severe cases, symptoms can persist for 24 hours or more, but death rarely occurs. [viii]