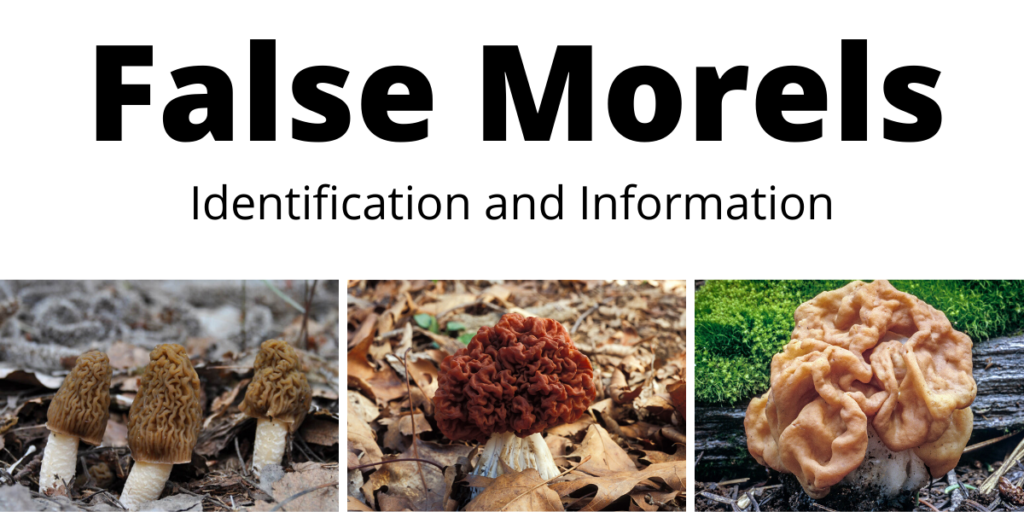 The false morels are a group of mushrooms that superficially resemble the famously delicious morels and can easily be mistaken for them—a problem, since the false morels vary from probably to definitely poisonous. The name applies to some members of three genera, at least according to current taxonomy (mushroom taxonomy is generally in a state of flux and has been for some time).

Gyromitra[i] and Helvella[ii] are closely-related genera that both include several species that have short stalks and convoluted, often wrinkled caps that may vaguely resemble the pitted caps of morels to varying degrees. The helvella species tend to be extravagantly lobed and twisted, as are some of the gyromitras, and so these resemble morels only distantly, but some of the gyomitras are globular and present more possibility for confusion. It is the gyromitras that are most frequently called “false morels,” although there are also gyromitras that don’t resemble morels at all, having an open, bowl-like shape. The Verpa genus is closely related to the true morels and its two species resemble morels more strongly than the gyromitras do, though their caps still are not pitted and their stems are very long. They are often called “early morels.”

Differentiating true morels from false is not difficult for an experienced forager, but mistakes are possible for the inexperienced or the careless; false morels are even sometimes sold as morels, apparently by accident. It’s important to be aware of the potential for confusion, even among presumably experienced professionals.

The following list is not exhaustive. Also, the gyromitras especially are in the process of being reorganized by genetic studies, so these species definitions could change. 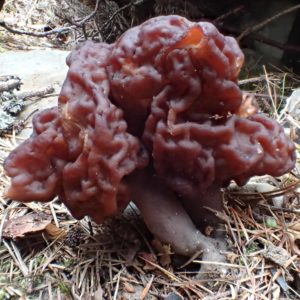 This is the species most often meant by “false morel.” Its rounded, extremely wrinkled cap lacks prominent lobes, vaguely suggesting the thimble-shaped cap of a morel, and its variable color can mimic that of several morel species. Further,  it fruits from the ground, often during morel season. Its stem is relatively thin. It is Eurasian; similar North American mushrooms are usually considered members of the same species, but might not be. G. esculenta is a favored edible, especially in some parts of Europe, but has also caused many human fatalities. 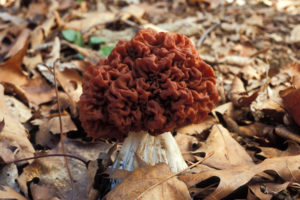 The cap of this mushroom, too, is extremely wrinkled and globular, but the stem can be quite thick near the base. The cap is often distinctively red. The mushroom is usually mid-size, but can be very large; occasional reports of giant, seven-pound morels are actually this species. The fungus fruits in the spring from the ground near rotting hardwood stumps or logs.  It is reputed to have relatively low levels of toxin. As the name implies, it grows in southeastern North America. 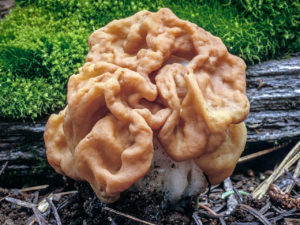 This species is regarded as safe to eat by many, but is also might be more than one species (it is broken up into several species by some authorities), so even if one of these is safe that does not mean the others are. Members of the complex occur in both Europe and North America. The stem is very thick, almost as broad as the cap, and quite short. The cap is extremely wrinkled and often squarish.  The fungus usually fruits from the ground near hardwoods, in the spring, but it has been found fruiting from standing trees as well.

There are several other American or Eurasian Gyromitra species that less closely resemble morels, since their caps have pointed lobes, lumps, or ruffles and may lack wrinkles. Some also fruit directly from downed wood or stumps, which morels do not. Still, confusion is possible, either with morels or, more likely, with one of the supposedly edible false morels. 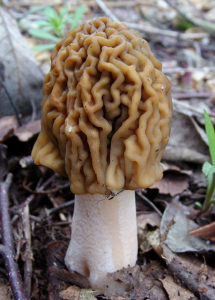 This species[iii] has a very wrinkled, thimble-shaped cap that may indeed come to look almost pitted with age. The resemblance to the caps of some morels is striking. The most obvious difference is the extremely long stem. The fungus fruits earlier than morels do, but the seasons overlap.

A European species that may or may not also grow in North America; the American V. conica could be one or even two separate species[iv]. The stem is long, but not as long as in V. bohemica, and the cap is smooth or only slightly wrinkled.

Helvella-group mushrooms are mostly fantastically lobed, so their resemblance to morels is borderline. Their resemblance to some of the gyromitras is notable, though, and they, too, have a paradoxical reputation as both toxic and edible[v].

Morels[vi] are the members of the Morchella genus and are prized by mushroom foragers. There are several different species, the taxonomy of which is very much in flux—many established common names, such as grey morel, actually refer to growth stages of other species, or are otherwise not separate types. Fortunately, morels as a group all share certain characteristics in common; it’s easy to say something is a morel, even if it’s not clear which morel it is.

Morels, like the various false morels, lack gills or any similar structure, and the cap has a bell-like structure. Unlike the false morels, which all release spores from the entire upper surface of the cap, morel spores come only from large pits that give the cap a very distinctive honeycomb appearance—in contrast to the used chewing-gum look of the gyromitras and the helvellas. Morels fruit from the ground, generally in the spring[vii], which not all the false morels do.

When in doubt, slice the mushroom longways; morels always have empty, hollow stems, whereas false morels of all types have either solid stems or stems filled with cottony tissue. Also, while both morels and false morels have caps that relate to their stems the way an umbrella relates to its handle, in morels the cap is fused to the stem for part or all of its length, whereas all types of false morel have the cap attached to the stem only at the top.

If a mushroom has a wrinkled, not pitted, cap, it’s not a morel.

If a mushroom has a stem that is not hollow, it’s not a morel.

If a mushroom has a cap that is attached to the stem only at the top, it’s not a morel.

If a mushroom has a cap that is globular or has lobes pointing in different directions, it’s not a morel.

If a mushroom is fruiting in the wrong place or at the wrong time, it’s probably not a morel.

When in doubt, leave it out!

Can False Morels be Eaten?

In a word? No, although people do eat them anyway[viii]. Some mistake false morels for morels. Others buy wild mushrooms harvested by someone who made a mistake. Still others eat false morels knowing exactly what they are and believing them to be safe anyway—and many do not get sick.

Gyromitras and helvellas both contain a substance that makes a good rocket fuel but can destroy human (or canine) red blood cells and cause organ failure. Verpas have a similar toxin. These toxins can be cooked off, provided ventilation is adequate (the fumes are toxic), and it is possible to eat members of these groups without trouble—but it’s also possible to eat false morels and die, and there are several reasons why it’s hard to be sure which mushroom meals are safe[ix].

First, the amount of toxin in this group varies not only by species but also by individual, meaning it is possible to eat them regularly without incident for years and then get a bad batch—an unusually toxic mushroom might still be dangerous after cooking. Second, there is evidence to suggest that the damage can be cumulative, meaning an enthusiast might be consuming too little toxin to show obvious symptoms while gradually getting sicker and sicker with each mushroom meal. By the time symptoms do show up, they are likely to be severe.

There are false morel species that appear to be edible, at least when properly prepared. Not all are necessarily deadly even if they do cause illness,  and it’s true that at least some instances of false morel poisoning may be attributable to unusual sensitivity on the part of the eater. The existence of sensitivity among a minority should not be taken as evidence that a food is dangerous for the majority (there are people who can be literally sickened by even skin contact with toxins in humble tomato juice[x]). The people who eat false morels on purpose are not stupid.

The problem is that because the amount of toxin in these mushrooms varies, and because the damage can be cumulative and initially symptom-free, eating false mushroom and not getting sick is not, by itself, proof that the species in question is safe (it’s also not proof that you are not an unusually sensitive individual). You could have eaten a false morel species many times without trouble, but the next mushroom meal might be different.

[x]      For example, me, the author; tomatoes are dangerously toxic for me, and no, it is not an allergy.

3 thoughts on “False Morel Mushrooms: Identification of the “Fake” Morels that Poison”