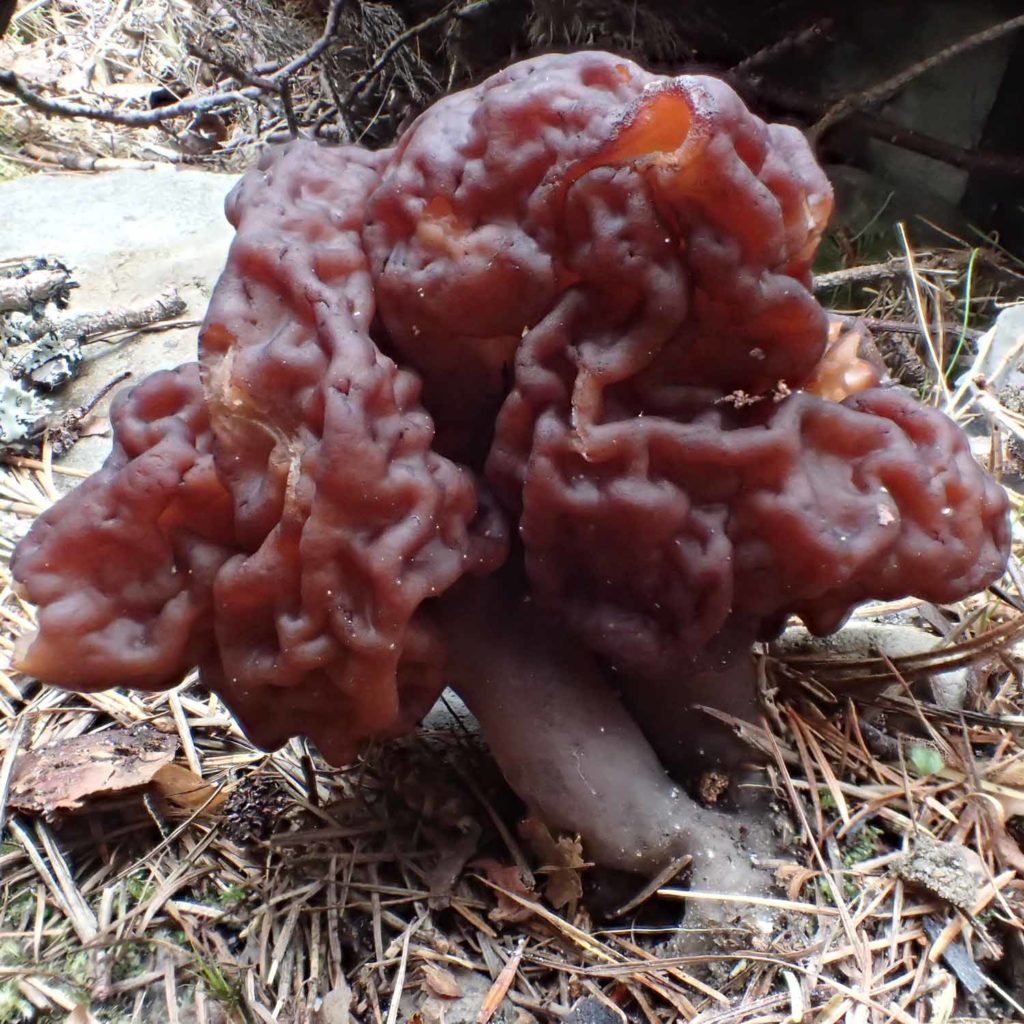 Gyromitra esculenta[i] is a popular edible that no one should eat because it is often quite toxic—more on that in the section on warnings below. The mushroom has multiple common names, including brain mushroom, beefsteak mushroom, turban fungus, and elephant ears, all references to its wrinkled, convoluted shape. It is one of the false morels, a group of mostly toxic species that closely resemble the famously delicious morels—though the two are not difficult for experienced foragers to tell apart.

The main reason to learn to recognize G. esculenta[ii], aside from the inherent value of knowledge, is to make sure not to mistake it for morels.

Cap: Convoluted in shape with brain-like wrinkles and folds. May be pinkish, reddish-brown, or nearly black, depending on age. The interior is partially hollow, with whitish or tan flesh.
Gills: There are no gills. The spores are produced on the cap surface. The underside of the cap is seldom visible.
Stem: Short, thin, often pale, often with deep, vertical folds. Never hollow.
Smell: Nothing distinctive.
Taste: Nothing distinctive.
Spores: Smooth, ellipsoid
Spore color: Reddish to orangish
Edibility:: Toxic.
Habitat: Fruits from the ground, usually under conifers. The fungus eats dead plant matter, but may also be mycorhizal to some extent.

The easiest way to check whether a mushroom is a morel or a false morel is to slice it down the middle; true morels have a hollow stem and a cap that is fused to the stem along its length. In contrast, in false morels like G. esculenta, the cap relates to the stem the same way a bell relates to its clapper (except that the joint between the two is not mobile—this bell can’t ring) and the stem is either solid or filled with cottony tissue. However, the shape of a false morel is also distinctive, and an experienced morel hunter usually knows which mushrooms to leave alone.

Although some people claim that G. esculenta is edible, it’s not generally recognized as medicinal, and most experts advise against ever eating it. The mushroom could be of benefit to someone with a rocket in need of fuel, however….

Dosage is not an issue for a mushroom that should never be eaten.

The toxin is carcinogenic in mice, but whether it is also so in humans has not been established—it could be[iv].

The toxin can be cooked out of the mushroom, but the fumes that rise up during cooking are also dangerously toxic. Further, cooking does not remove all of the toxin; because the amount of toxin varies wildly, sometimes the cooked mushroom is safe to eat, sometimes there is enough toxin left to kill. There is no way to know. Enthusiasts can eat these mushrooms regularly for years without problems and then get a bad batch and die.

Vulnerability to the toxin also varies, both from person to person and over the course of a person’s life. Pregnant women, for example, are typically more vulnerable than most people. So it’s possible for two people to eat the same batch of mushrooms and have very different reactions. It’s also possible (not confirmed) that the effects of the toxin may be cumulative, so the chance of serious health problems might go up with regular use over time.

Some enthusiasts know all of the above but choose to eat G. esculenta anyway.