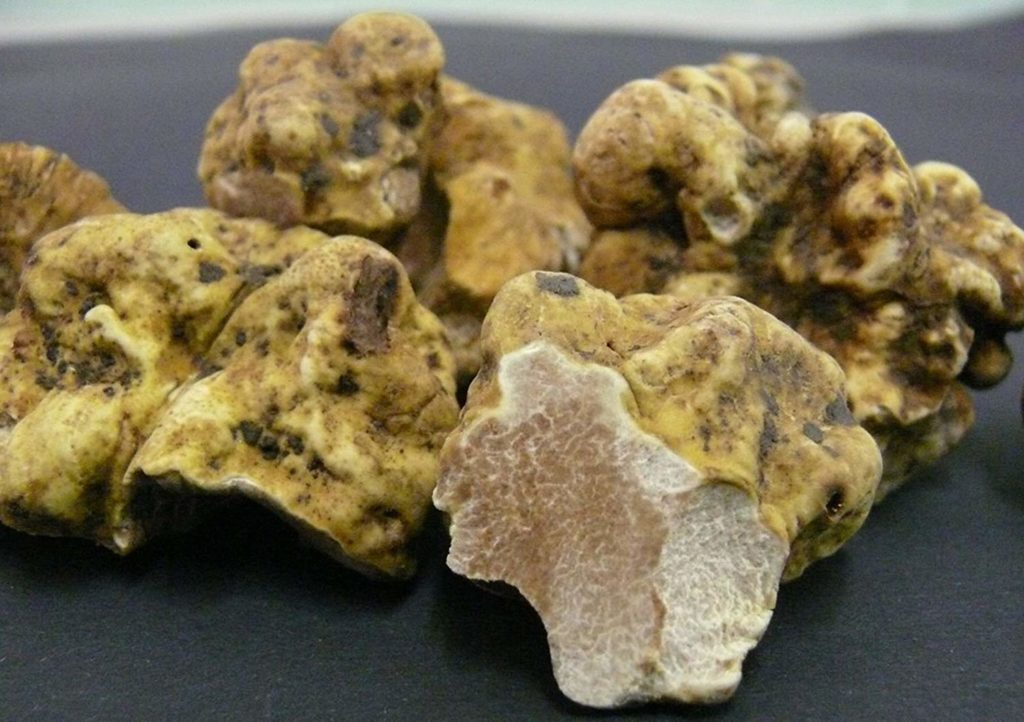 The Tuber spp. are ectomycorrhizal ascomycetes that produce ascocarps, also known as truffles . Truffle is the fruiting body of fungi and so is considered a mushroom. Tuber magnatum is described as a ‘delectable white truffle’ [2.] and produces the most valuable of the truffle species accredited to its unique and pungent scent, in addition to its flavor.

The main reason for the use of truffles in cuisine, including French, Italian or Spanish, is due to their distinctive aroma and exceptional flavor. Edible mushrooms from the genus Tuber, because of their rarity are the most expensive mushroom in the world [3.] and the quality of these fruiting bodies, varies depending on their area of origin. The Piedmont truffle can be found in the Piedmont area and Toscana, Umbria and Lazio in North Italy; in addition to the Motovan Forest in Croatia, Hungary, Romania and Slovenia. Because they are formed underground, the truffles rely on being brought to the surface, such as digging, by animals.

The quality and rarity of the Tuber magnatum has led to evaluation of the seasonal growth of the mycelium in different regions in Italy, and it is shown that Summer, probably due to the heat and dryness of the weather, sees a significant decrease in putative fruiting points [4] with the fruit preferring rainfall to encourage production. Despite the commercial value of truffles, it is only the European truffle that has not yet successfully been cultivated for commercial purposes [5.]. The season for Tuber magnatum is very short from late September to late November or early December. Their intense smell may be attributed to the climate and soil that they are grown in, this can lead to a cheese or garlic-like smell [6.].

It is said that a hotelier in Alba delivered the best specimen of the White Truffle of Alba to Rita Hayworth in 1949 and since then it became a tradition to offer this exquisite truffle to influential people, including Pope Paul VI, a Prince Umberto of Piedmont and King Vittorio III of Italy. Tuber magnatum were first identified in the classical period by Rome and Thracia and are still considered a gem of a truffle.

Fruiting body: Firm texture, off-white becoming light yellow, brown to a reddish brown. There is frequently a reddish pigmentation that appears in the Tuber magnatum fruiting body. The truffles are often lobed potato-like hence the name Tuber or irregular and shapeless in form, sometimes flattened.
Smell: Distinctive properties; strong and the most aromatic of the truffle species. Sometimes described as garlicky.
Taste: Strong; exceptional flavor [7.]; garlic-like and pleasant.
Spore color: Off-white/creamy or with a yellow tinge.
Spores: The spores are released from under the ground usually due to digging by animals.
Edibility: Eaten raw to maintain the aroma.
Habitat: Shady areas. Found associated with/on the roots of oaks, poplars, willows, hazels and lindens. Grown underground and take their nutrients from the trees.
Phylum: Ascomycota; Class: Pezizimycetes; Order: Pezizales and Family: Tuberaceae.

In vitro examination of the biochemical properties of the white truffle, Tuber magnatum was performed following both methanol and water extraction. It was observed that anti-inflammatory potential was observed with possible inhibition of specific pathways involved in the inflammatory process, acting as a mediator. Inflammation underpins many diseased conditions and this is a promising finding [3.].

Methanol extracts of Tuber magnatum have also demonstrated cytotoxic benefits in vitro against some lines of cancer cells including HeLa cells, a cervical cancer line and HT-29 a colon adenocarcinoma [3.].

It has been historically rumored that truffles hold aphrodisiac properties; although this is primarily a testament of those that have eaten the truffle as opposed to scientific evidence. It is thought that the presence of a chemical that is similar to human androsterone is in truffles, and responsible for their aphrodisiac properties. Androsterone is a sex hormone that makes men sexually appeal to women.

In a study ending in 2014, 34 males were interviewed from South Piedmont in relation to truffle collecting, and it is reported that some wives of the gatherers commented that consuming the Piedmont white truffles acted as an aphrodisiac [8.].

There are no recommendations for dosage of Tuber magnatum.

Storage at 4°C is thought to be the best method of preserving biochemical and microbiological components of fresh truffles [9.]. A few cases of upset stomach have been reported following the eating of truffles, it is questioned whether it is chitin in the cell wall that may be responsible [6.]. Others report no side effects and the Tuber magnatum is considered a luxury.

Tuber magnatum should not be used as a replacement for conventional therapy as prescribed by a physician. Always take clear medical advice before using Tuber magnatum for therapeutic purposes and/or when pregnant.