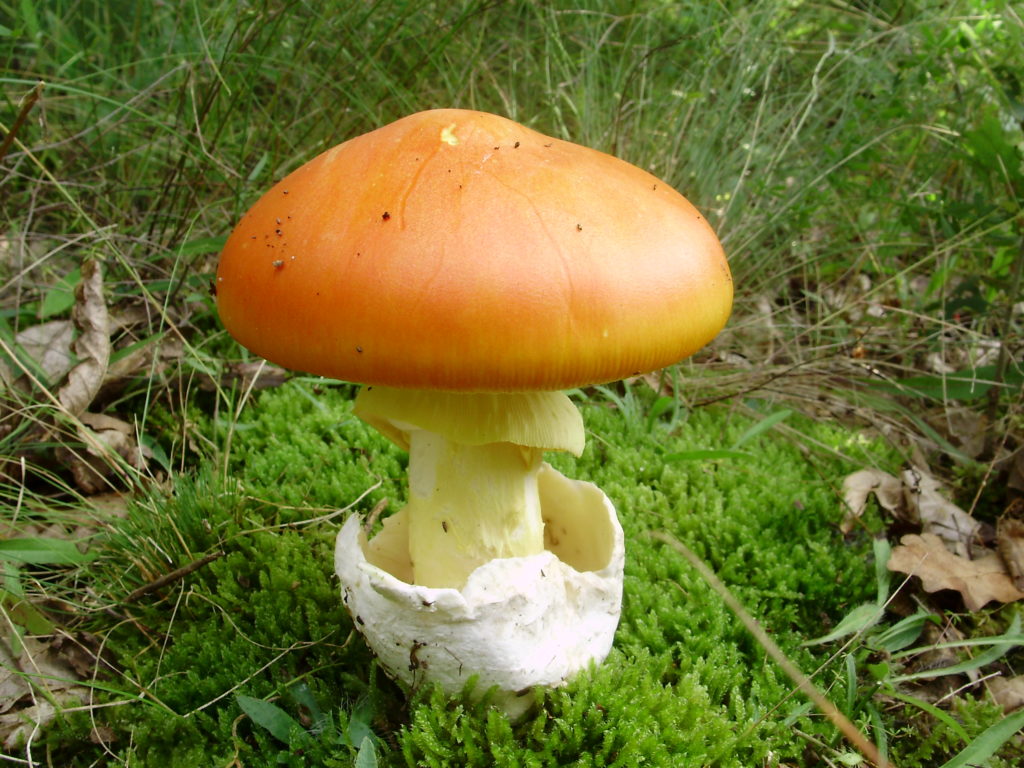 Amanita caesarea[i] is in the same genus as some of the most toxic mushrooms in the world. However, not all amanitas are dangerous, and some are actually safe to eat.

A.caesarea is an edible amanita.

In fact, both the scientific name and the common English name refer to the fondness for eating this mushroom on the part of many Roman emperors. That fondness could be taken advantage of; the emperor, Claudius (the protagonist of the historical novels, I, Claudius and Claudius the God) was murdered by his wife who slipped a toxic amanita in with the edible kind.

A.caesarea[ii] is native to Europe and Africa. It does not grow in North America, although there are two American look-alikes that are also often called Caesar’s mushroom. They are also considered edible, with the major caveat that they, too, resemble toxic species—and there are many amanitas whose toxicity or edibility are not known.

A.caesaria is not generally used for medicinal purposes, but finding out whether any research suggests possible medicinal uses is difficult for a curious reason: in internet searches, the species is often upstaged by its famous (and famously hallucinogenic) cousin, A. muscaria. Nevertheless, diligence is rewarded by at least one paper; this species does have medicinal potential.

Cap: Reddish-orange, curved but becoming flat-topped with age, up to six inches across. The edges have faint striations. The upper surface is smooth, with no warts or spots.
Gills: Pale yellow to pale orange, never pure white, not attached to the stalk.
Stem: Pale yellow to pale orange, never pure white.
Smell: Not distinctive for identification.
Taste: Not distinctive for identification.
Spore color: White
Edibility: Choice, but with caution
Habitat: A mycorhizal species, meaning the fungus lives in partnership with the roots of trees. Fruits from the ground, typically beneath pines and oaks.

Amanitas, as a group, have several distinctive features. The mushroom in its button stage has an egg-like shape and is completely enclosed in a shell-like structure called a universal veil. A second veil stretches from the rim of the cap to the stem, covering the gills. As the mushroom expands in size, both veils tear apart, leaving a cup called a volva at the base of the stem and a skirt-like ring around the stem about halfway up. In many amanitas, although not A. caesarea, fragments of the universal veil cling to the top of the cap and resemble warts. However, individuals might be missing some or all of these features due to damage.

Traditionally, Caesar’s mushroom is best eaten in the button stage, while encased in the universal veil—that is why the Italian name of the species translates as “egg mushroom” or “good egg.” However, identification is even more challenging when nothing is visible besides the smooth veil.

The taxonomy of the entire group is a little unclear, and there are many species whose edibility or toxicity are not known.

As with other edible mushrooms, A. caesarea is a relatively healthy food, although some mycologists suggest not eating it to excess. In vitro studies suggest that it is both antimicrobial and antioxidant, and while is is not clear how those effects manifest once the mushroom is eaten, researchers do recommend the species as food[iii].

The species is not currently being used for medicinal purposes, nor does it have a history of medicinal use.

Because A. caesarea is not a current treatment for anything, dosage is not an issue. It may be eaten freely, though perhaps not to excess.

A.caesarea is not toxic, though it can accumulate heavy metals if any are in the soil[iv]. In most cases, it is safe to eat. Some writers even claim it can be safely eaten raw[v], which is unusual for mushrooms. However, the species has toxic look-alikes, including some that can kill. Other look-alikes are hallucinogenic. Still others have not been studied at all. A, caesarea is not harder to identify than other species, but the dire consequences of a mistake do warrant greater caution.

Even experienced foragers can sometimes be thrown by an unfamiliar look-alikes; there are documented fatalities among travelers or immigrants who mistook a toxic amanita for an edible amanita from back home (in Asia) called white Caesar[vi].

Finally, while A. caesarea, like any other food, can cause allergic reaction or other problems for sensitive individuals, the standard advice (go to a doctor if symptoms persist) is no good in cases of mistaken identity. Toxic amanitas often taste excellent and have few, if any, symptoms until after permanent or possibly fatal damage has occurred[vii]. Anyone who suspects they may have eaten the wrong amanita species should not wait for discomfort to set in but should seek treatment immediately.

2 thoughts on “Amanita Caesarea: All about the Edible Caesar’s Mushroom”