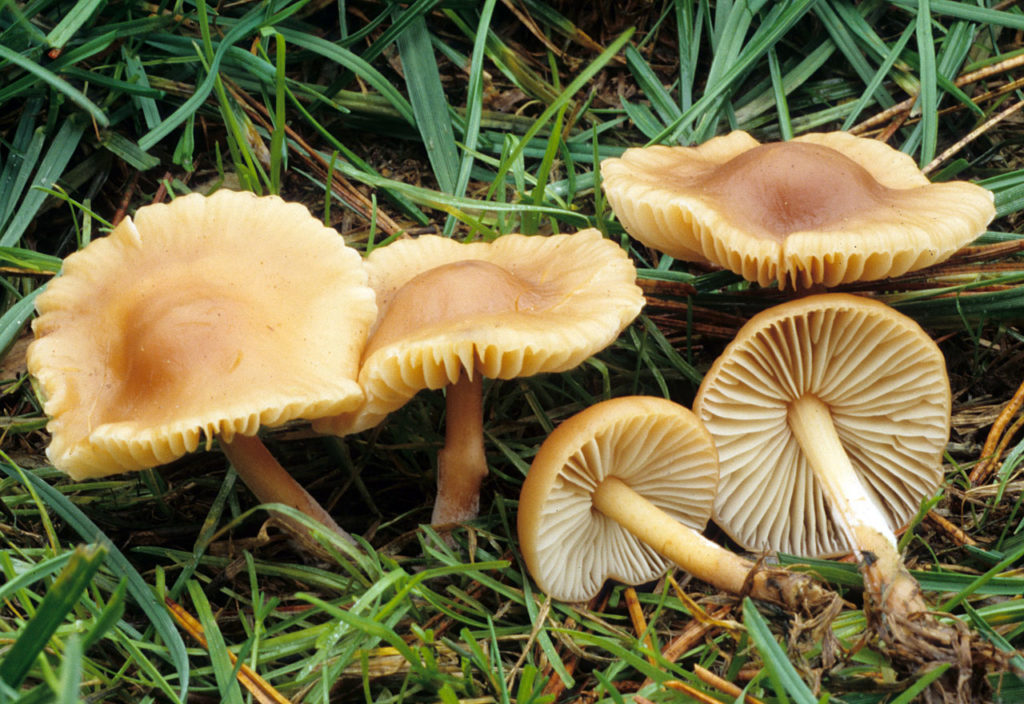 Marasmius oreades is a mushroom that is part of the Marasmiaceae family. It is primarily found in North America and loves grassy areas. Marasmius oreades is commonly referred to as the “Fairy Ring Champignon” and that name will be used interchangeably throughout this article. The name, “fairy ring,” is misleading, not because this species fails to form rings, but because so many other mushroom species also form them[i]. Rings develop when the mycelium of a fungus grows outwards in all directions from a central point but dies back in the middle. Since the mycelium is underground, it’s not visible, but when the fungus fruits, the mushrooms come up arranged in a ring. According to legend, these rings mark the sites of fairy circle-dances—if a mortal should step in the ring while the invisible dance is in progress, he or she will be compelled to join in!

Curiously, fungi are not alone in the ring growth habit. There are grasses, shrubs, and even trees (including the giant coastal redwood) that spread by rings of under-ground roots and send up shoots arranged in circles.

Marasmius oreades, also known as the fairy ring mushroom or the Scotch bonnet (a name also applied, coincidentally, to an extremely hot pepper) can also fruit in irregular clusters or in open-ended arcs. And however the mushrooms come up, they are enthusiastically eaten by humans and prized for their unusual, sweet taste.

That sweet taste makes possible a trick even more magical-seeming than the rings; sugar-like molecules in the fungal tissues protect the cells from damage when the mushroom dries out. This means that if you re-hydrate some dried fairies but don’t cook them right away, those mushrooms will come to life again and start producing spores[ii].

Cap: Small, initially bell-shaped, becoming flatter with age but usually still with a raised center. Color varies, but is usually tan to white. The flesh is white with a tough texture.
Gills: White or tan, widely-spaced, may or may not be attached to the stem.
Stem: Short, thin, tough, either the same color as the cap or paler.
Smell: Nothing distinctive for identification purposes.
Taste: Nothing distinctive for identification purposes.
Spores: Smooth, ellipsoid.
Spore color: White
Edibility: Considered choice
Habitat: Eats dead plant matter in grassy areas such as lawns, meadows, and grassy dunes.

The ring growth habit is not a good field-mark, both because other species (at least one of which is dangerously toxic) have grow that way, and because fairy does not always grow in a ring. Careful attention to shape and color is important, as is the fact that this fairy ring only grows in grass.

The presence of a fairy ring is sometimes visible even when the fungus is not fruiting because the grass just inside it is a different color—as the older part of the mycelium dies back, it releases nutrients back into the soil, helping the grass grow. While not all rings cause a color change and not all fungal rings are caused by the fairy mushroom, a circle of brighter grass is worth returning to, to see what fruits there. The species is common across much of North America and Europe.

The primary benefits of the fairy mushroom involve taste; some people really enjoy the sweet flavor. They are a healthy food, and while they are not generally used for medicinal purposes, the species has been the subject of medical research.

Fairy mushrooms are extremely small and not likely to be a main component of any dish—they are used in cooking mostly for their flavor and their interesting texture. That being said, they do make a healthy addition to a meal[iii], being high in protein and fiber and very low in carbohydrates and fats.

The mushrooms can be purchased dried. Some people use them to make cookies because of the sweet, almost cinnamon-like flavor. The usual recommendation is to eat only the caps as the stems are very tough.

Fairy mushroom extracts were tested for various medicinal functions in a strictly in vitro study. The results were mixed, but interesting[iv]. While the extract did not prove antibacterial, it was very effective against all types of biofilms tested. A biofilm is a colony of microorganisms, generally bacteria or fungi or both, that stick both to each other and to a moist surface—dental plaque is a familiar example. While biofilms are not inherently bad, several types can form inside the human body (either on human tissue or on implants) and cause disease. Such films are often very resistant to antibiotics, so discovering substances that are effective against them is important. The same extract also proved moderately effective against certain cancer cell lines.

It is important to recognize that an encouraging in vitro test is no guarantee that the extract will be a safe and effective treatment for anything, nor does it prove that eating the whole mushroom has any medicinal value. It is a suggestion of potential medicinal value only.

Since fairy mushrooms are not currently being used to treat anything, dosage is not an issue. They may be eaten freely for their food value.

Although the fairy ring mushroom is itself safe to eat, it has toxic look-alikes, including the deadly fool’s funnel[v]. Another cause for concern is that because the fairy grows in grassy places and many grassy places (lawns and golf courses especially) are sprayed with pesticides and herbicides, it’s possible for the mushrooms to have absorbed poisons put on them by humans[vi]. In short, foragers need to know what they are gathering and the status of the land they are gathering from—and eaters who are not foragers need to vet their sources carefully.

1 thought on “Marasmius oreades: All About The Fairy Ring Champignon Mushroom”