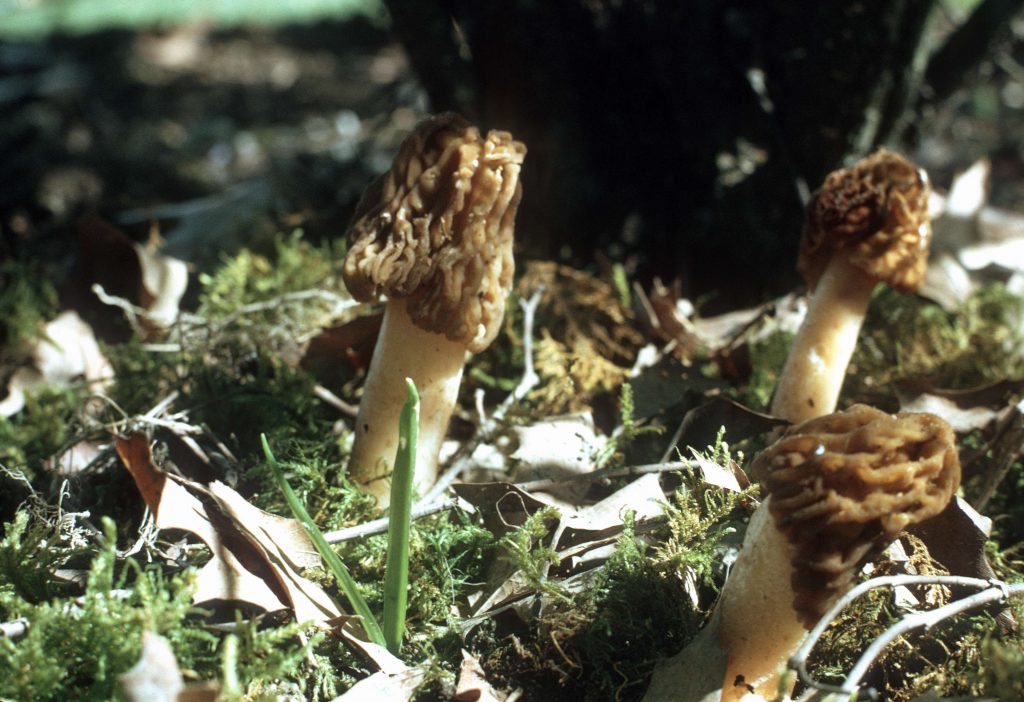 The Verpas, or early morels or thimble-caps, are a group of mushrooms closely related to the morels and resembling them to a greater or lesser degree, depending on species. Of the two Verpas most often found in the United States, it is Verpa behemica[i] that most closely resembles true morels and is therefore usually what is meant when somebody says “early morel.” The “early” refers to the fact that Verpas generally fruit just before and in the beginning of morel season. The much less frequently-used name, wrinkled thimble-cap, is perhaps a better descriptor, since Verpas look rather like a thimble on the end of a long finger, and the cap of V. Behemica is distinctively wrinkled.

The early morels are widely known as a toxic look-alike of the morels, and could indeed be mistaken for some morel species, particularly the half-free, if a forager forgets to check for certain key characteristics. However, many of the people who eat early morels do so on purpose and do not get poisoned. Opinion differs widely on whether the early morel is a poisonous mushroom that some people are lucky enough not to be susceptible to, or an edible mushroom that nonetheless makes some people ill.

At the very least, it seems reasonable to say be sure never to eat early morels accidentally, and to do a great deal of careful research before eating them on purpose.

Cap: Small, roughly thimble-shaped to slightly irregular, taller than it is wide, wrinkled or sometimes ridged and pitted, fuzzy or not, tan to yellowish brown.
Gills: No gills. The spores are released from the outer surface of the cap.
Stem: Usually longer, sometimes much longer, than the cap, and of just about the same thickness as the cap—like a thimble on a finger. Whitish to dull yellow, sometimes bruising orange.
Smell: Nothing distinctive for identification.
Taste: Nothing distinctive for identification.
Spores: Oval, smooth.
Edibility: Debatable.
Habitat: Fruits from the ground under trees, usually but not exclusively hardwoods. May or may not be mycorrhizal, nobody’s sure, yet.

The most distinctive characteristics of early morels as a group[ii] are the freely-hanging cap (that is, the stem is attached to the cap only at the top, like the clapper of a bell) and the fact that the stem is usually filled with cottany material. However, very young specimens may have solid, or nearly-solid stems, while very old specimens may have hollow stems.

V. bohemica[iii] differs rather clearly from the other relatively common Verpa of North America, V. conica, in having a wrinkled, sometimes pitted cap, whereas V. conica has a nearly smooth cap. Other Verpas do have wrinkled or pitted caps, but they differ in more subtle ways, and are in any case almost never seen in North America.

The closest look-alikes of V. Bohemica are the half-free morels, Morchella populiphila and Morchella punctipes. Both not only have the long stem of the Verpas, but, unlike most morels, have caps not completely fused to the stem. As the common name implies, though, half-free morels have caps that are only half-free from the stems. The upper part of the cap is fused to the stem. Also, the half-frees have hollow stems, whereas Verpas usually have cottony material filling theirs.

V. bohemica also looks very much like older specimens of either species of Phallus stinkhorn (Phallus impudicus and Phallus hadriani), once the latter have lost the thick, smooth, layer of gleba from their pitted and ridged caps. Stinkhorns do usually have a characteristic stink, but there are nearly odorless individuals. A more reliable distinction is that stinkhorns have a cup of tissue, the volva, at the base—but the volva can be buried, and might break off during harvest if the harvester is not careful.

V. bohemica is sometimes confused with some of the false morels, which also have wrinkled caps free from the stem. But their caps are often more irregular, even lobed, in shape, and their stems are either chambered or solid, not cotton-filled.

Since there is currently no consensus on whether V. bohemica is even safe to consume, the question of whether it might have medicinal properties must be tabled for now.

Most experts assert categorically that V. bohemica is mildly but definitely toxic, yet some people eat them without apparent ill effect. There is, in fact, no proof that this species contains any known toxin, and least not after it has been cooked. The species does, in fact, seem similar to the true morels in that uncooked mushrooms can make people ill, and even properly cooked specimens occasionally cause gastrointestinal upset and problems with the nervous system[iv]. And yet “everybody knows” morels are edible and Verpas are poisonous. Whether this similarity is an argument in favor of eating Verpas or not eating morels is not clear—and we are not going to attempt to resolve the question here.