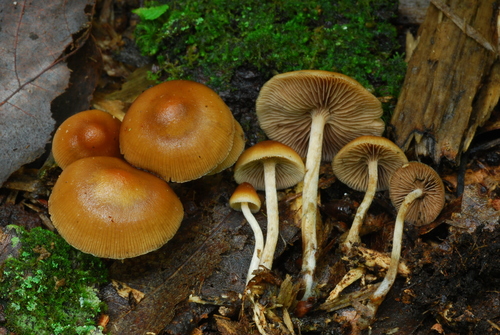 Psilocybe caerulipes aka The Little Bluefoot[i] gets its name by being bluish around the base of the stem—and by being smaller than the big bluefoot. The blue color isn’t a reliable indicator of psilocybin content, as some blue mushrooms lack the chemical, while some non-blue mushrooms have it. In the case of the bluefoot, though, the color gives the right impression; this is a psychoactive species, often used recreationally by those lucky enough to find and recognize it. Even within its range (Ohio, Ontario, Maine & Kentucky) it can be difficult to find.

Little Bluefoot is also rarely cultivated because its spores are hard to get[ii]. There is little to no information available on how to grow the species, because hardly anybody ever does it.

Cap: Small, generally conical, especially when young. Sometimes irregular. Reddish or orangish brown, fading to buff. Often with green stains. The surface is a little slimy when moist. The interior flesh bruises blue, but the change can take a while.
Gills: Close together, attached to the stem. Initially brown but becoming reddish-brown in maturity. The edges are whitish.
Stem: Proportionately a little thick, generally paler than the cap. Bruises blue, though not quickly. Dries bluish. Solid when young, becoming hollow with age. There is no ring, but young specimens sometimes have a visible ring zone.
Smell: Very slightly flour-like.
Taste: Flour-like.
Spores: Ellipsoid, variable in size.
Spore color: Dark purple-brown
Edibility: Psychoactive
Habitat: Eats and fruits from or near fallen logs or woody debris from hardwood trees. Sometimes found in mulch.

Though relatively wide-spread, Little Bluefoot is hard to find and easily confused with other species. Few people know much about it, and there are experienced Psilocybe hunters who have never found one[iii]. They can fruit singly or in loose groups.

The closest look-alike of the Little Bluefoot is The Big Bluefoot (p. ovoideocystidiata), which, as the names imply, differs mostly in being larger. The two species share much of the same range and habitat, but Little Bluefoot fruits later in the year, though with some overlap[iv]. The fact that both are often referred to simply as “bluefoot” does not help avoid confusion. Fortunately, both are relatively safe psychoactive mushrooms, so somebody who eats one while meaning to eat the other might not notice the difference.

The same cannot be said of all possible mix-ups.

LittleBbluefoot is one of the “Little Brown Mushrooms” or LBMs, a huge group of mostly unrelated, but very similar-looking mushrooms that can easily be confused with each other. The group includes most of the psilocybin-containing mushrooms, a few that can be safely eaten but are not psychoactive, and a couple of notable toxics, including the aptly-named Deadly Galerina (Galerina marginata), which—frighteningly—shares the same habitat as many of the other LBMs, including Little Bluefoot, and sometimes fruits among them in the same group.

Eat a Deadly Galerina, and you will probably die a few days later.

In general, the benefits of Little Bluefoot are the benefits of psilocybin—and these are debatable. Certainly some people very much enjoy eating mushrooms and getting altered. Some also claim deep spiritual and even psychological and medical benefits from using psilocybin. There are people who credit psilocybin use with the successful treatment of a whole range of serious maladies, from depression to migraine headaches. However, research into psilocybin use has been severely hampered by the fact that it remains illegal in most jurisdictions. The substance certainly has potential and deserves to be investigated, but it’s worth noting that we really don’t know for sure, yet.

Personal conviction based on individual experience is notoriously unreliable in humans. For every beloved folk remedy that really works, there is one that doesn’t.

The effects of eating Little Bluefoot[v] are essentially the same as the effects of eating an equivalent dose of its better-known relative, P. cubensis—to be equivalent, the dose usually has to be larger, though. The high is generally characterized by euphoria and a feeling of connectedness combined with hallucinations  that can be anywhere from subtle to dramatic, depending on the dose. Many people report having important personal and spiritual insights under the influence.

However, the mushroom will amplify whatever is going on for the user emotionally, good or bad, and can sometimes trigger anxiety. At higher doses especially, the dramatically altered thought-process caused by psilocybin can become difficult to deal with. Proper mental and emotional preparation and safe, relaxing surroundings are critical to having a good experience.

The effects last for six hours or more, gradually increasing towards a peak and then gradually fading away.

Though usually of medium to low potency, the psilocybin content of Little Bluefoot can vary by over a factor of ten from one specimen to another. Human sensitivity to the substance can also vary widely. It’s best to be cautious.

Popular methods of consumption for Little Bluefoot include Lemon Tek and Shroom Tea.

The most dangerous thing about the Little Bluefoot is undoubtedly to possibility of confusion with Deadly Galerina. People who do make that mistake should not give up, as poisoning victims can sometimes be saved, just call a poison control center immediately and explain the problem. If possible, bring a sample of the offending mushroom to the hospital (though be sure it is a sample of Deadly Galerina, not one of the Little Bluefoots that were growing next to it and caused the confusion in the first place). Bear in mind that this is amanitin, a toxin that sometimes causes no symptoms for a day or so after ingestion and that often involves a false “recovery period” in which symptoms go away for a day or more while the toxin is quietly destroying the liver. It is therefore important that the medical staff know what toxin they are dealing with, since the game must be played very differently than for most other poisons.

The second-most dangerous thing about the Little Bluefoot is that, like all other psilocybin-containing mushrooms, it is extremely illegal in most jurisdictions. In the United States, even in cities or states where personal use has been decriminalized, psilocybin remains illegal at the Federal level. Being caught with these mushrooms can, in some circumstances, ruin a life.

All that being said, there are some side-effects and risks associated with eating psilocybin mushrooms.

The most common side-effect is nausea and sometimes vomiting, though anxiety is also not uncommon and can be intense. More serious side effects, though rare, have been documented. And while serious psychological harm seems to be less common than generally supposed, it can happen, especially in users who already have mental health challenges.

Experienced psilocybin users generally recommend starting with a low dose, always erring on the side of under-dosing rather than over-dosing, and never “tripping” alone. Having a friend present who is currently sober can be invaluable if anxiety comes up or for attending to any practical matters that might come up and that might be difficult to deal with while altered.