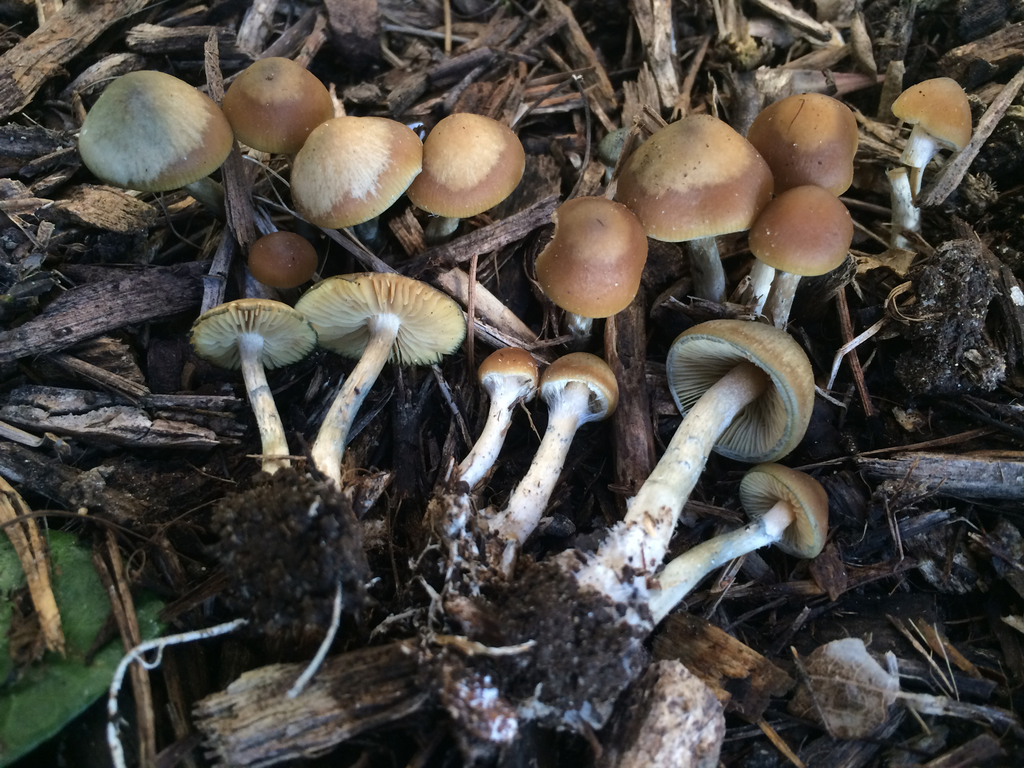 Cap: Convex. 1.5 to 5cm diameter. When hydrated, the cap is colored orange-brown or chestnut; whiter or cream when dried. Translucent margins; become wavy with maturity. Flesh is thick and pliable and bruises blue or green. Convex but can flatten with age.
Gills: Off white to rusty brown; can be lavender or dark purple to brown.
Stem: Variable from 1.5cm to 9cm tall; 1mm to 7mm thick. Some of the stems may grow partially underground. Hollow, slender and ringed. The partial veil forms a ring that may be partial or pronounced. White or yellowish with brown or blue tones. Smooth at the top, may have small scales near the bottom.
Smell: Mild; starch like; spicy. Fresh ground smell.
Taste: Mild; starchy like. Like fresh earthy ground.
Spores: Thick-walled and rhombus.
Spore color: Dark purple or black
Edibility: Edible but contains bioactive hallucinogenic alkaloids.
Habitat: Coastal regions of US, native to Ohio, Pennsylvania and West Virginia. Saprotrophic; Found on hardwood, mulch and other woody debris; close to rivers and streams in sandy loams. Not usually found in man-made mulch. Psilocybe ovoideocystidiata likes a temperate climate, quite tolerant to cold weather.
Season: April to June.

Psilocybin is a natural psychedelic compound, used as a drug and is found in hundreds of mushrooms within the ‘magic mushroom’ family. In general, the effects of psilocybin will produce mind-altering effects, such as hallucinations – both auditory and visual, in addition to a feeling of euphoria and many people will describe out of body experiences and other spiritual-like experiences. It is possible that the use of psilocybin goes back hundreds if not thousands of years; however, the mushroom Psilocybe ovoideocystidiata itself is relatively new, and it has not been adequately researched to date to ascertain its efficacy and safety.

There are no reported scientific studies of Psilocybe ovoideocystidiata regarding a dosage limit or that it is safe to eat.

Popular methods of consumption for Psilocybe Ovoideocystidiata include Lemon Tek and Shroom Tea.