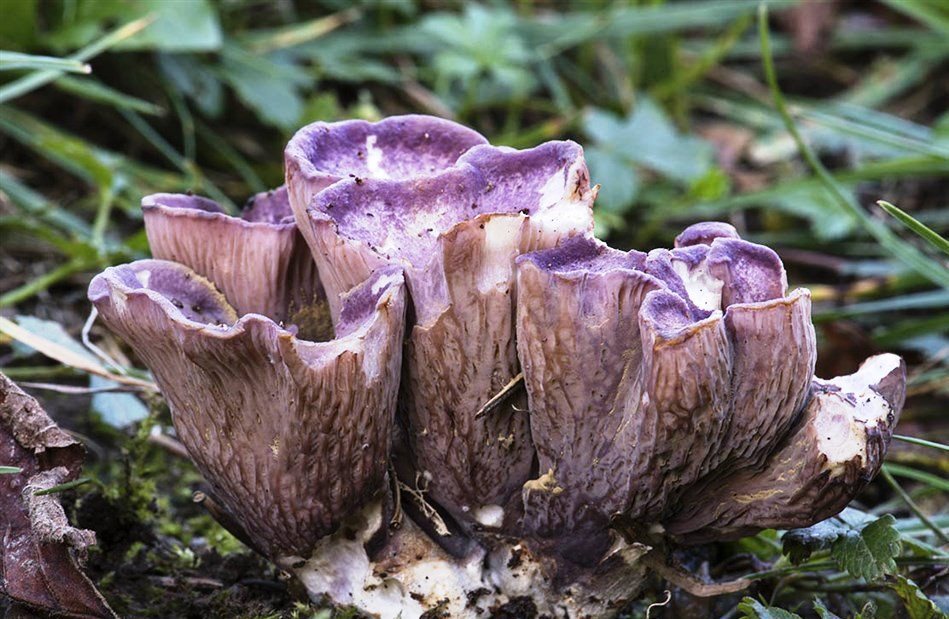 Pig’s ear,[i] also called pig’s feet or violet chanterelle, does does resemble any part of a pig, nor is it a chanterelle. It does vaguely resemble the chanterelles, though, having the same vase-like shape and ridges rather than gills, and it is often a lovely pale purplish color.

While the species has some medicinal potential, it is not a traditional part of folk medicine, nor is it popular among modern alternative medicine enthusiasts. The mushroom’s claim to fame is that it is edible—opinions on the taste vary, but it is savored by some.

Pig’s ear is relatively easy to identify, but reading up on the species can be confusing as its scientific name has changed several times, plus it is one of those mushrooms that is often referred to as a chanterelle but isn’t.

Cap: vase-shaped, essentially a widening of the stem, with wavy, irregular margins. Sometimes large. The top can be flattish or more or less depressed.  Brownish lilac when fresh, fading to tan. The interior flesh is pale and anywhere from yellowish to purpleish. Caps from the same stem may partly fuse together.
Gills: There are no true gills. Instead, the outer surface of the vase is covered with low ridges. Dark lilac to purple in young specimens, but often fading to light lilac with age.
Stem: Difficult to differentiate from the cap. Whitish near the base but may bruise reddish brown. Velvety at the bottom, though the fruiting body is bald elsewhere. Often branches to support multiple caps.
Smell: Nothing distinctive for ID purposes.
Taste: Nothing distinctive for ID purposes.
Spores: Long and thin.
Spore color: Brownish.
Edibility: Edible; considered choice by some, tasteless by others.
Habitat: Fruits from the ground among conifers with which this species is mycorhizal.

The time of the typical fruiting season varies significantly from one region to another.

Pig’s Ear does not have many close look-alikes. It’s vase-like form and its possession of false gills rather than true gills are shared by the other gomphoid mushrooms, as well as by the trumpets, the true chanterelles, and a few others, but very few of these are are in any way lilac-colored. Likewise, there are  mushrooms that share pig’s ear’s lilac and brown coloring, plus others that come in various shades blue and purple, but most of these have true gills.

There are at least three possible points of confusion, however[ii].

Scaly chanterelle (Turbinellus floccosus): Not a true chanterelle, but does have the vase-like shape. Differs from pig’s ear in several respects, notably that the stem never forks, and the cap has scaly orange patches.

Blue Chanterelle (Polyozellus multiplex): Another not-true chanterelle. It is a much darker blue, and it is smaller than pig’s ear.

There are also at least two species in some guidebooks that are now thought to be just pig’s ear by another name, and which could therefore complicate identification[iv]. And pig’s ear can fade and lose its purplish color, making it less distinctive.

But the bottom line is that pig’s ear is relatively easy to identify under most circumstances and its close look-alikes are also edible—as long as one checks for false gills. Any mushroom with true gills is not pig’s ear, and there are gilled species that are blue or bluish and toxic[v].

Preliminary research shows that pig’s ear contains chemical substances that can kill laboratory-grown cancer cells[vi], but the substances have not been tested on animal subjects or human patients. The species is not generally used as a medical treatment or health supplement.

A more obvious benefit is that the mushroom tastes good, at least to some people. Nutritional information is hard to find, but most edible mushrooms are healthy in that they are low in fat and calories and usually high in at least some vitamins.

As a mycorhizal fungus, pig’s ear does have the additional benefit of helping forests grow and sequester carbon. Unfortunately, the old-growth forests where this species usually lives are becoming rare, pig’s ear is becoming rare as well[vii].

Since pig’s ear is not currently used for medicine, there is no dosage guideline. It can be eaten freely.

Pig’s ear itself is not toxic, although as with any food, some individuals may have allergies or hypersensitivities. Most of its look-alikes and relatives are also not toxic, and the exceptions can usually be ruled out simply by noting the presence of gills. However, it’s still important for foragers to carefully identify the species, as most people, however intelligent and well-informed, are capable of making a “stupid” ID mistake occasionally.