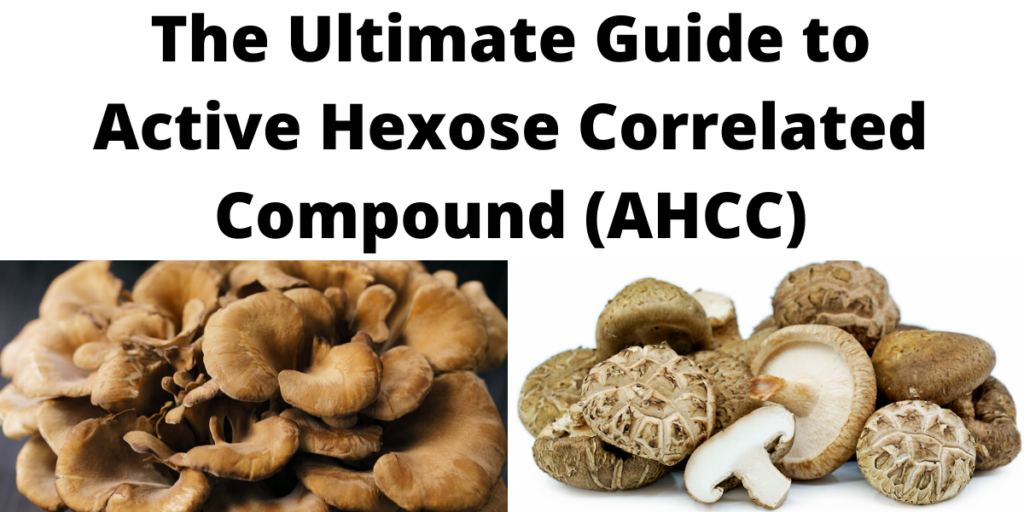 Active Hexose Correlated Compound (AHCC) is an enzyme-fermented extract from several mushrooms of the Basidiomycetes family. It is growing in popularity due to its potential for improving health. The extract is from the mycelia of the fungi, including Shitake and Maitake. Mushrooms have been revered for their medicinal properties for many years. AHCC is different because the fermentation process breaks down the components of the mushroom from a high molecular weight to a low molecular weight, and this enables the smaller molecules to be absorbed and used by the body more efficiently and rapidly.

AHCC was first developed in Tokyo in 1989 by Dr. Toshihiko Okamoto from the University of Tokyo and the Amino Up Chemical Company. At the time it was to be used as a natural way of controlling high blood pressure. It has since been investigated for its beneficial properties in cancer, the immune system, and viral infections. AHCC is commonly used as a nutritional supplement in Japan but is now being researched in China, Korea, and the United States. The predominant components of AHCC are oligosaccharides, and of these 20% are alpha-glucans, thought to be the bioactive compound. AHCC contains carbohydrates (70%), proteins (13%), minerals (9%), fibre (2%) and fats (2%).

Editors Note: Do not take any nutritional supplement without consulting your Doctor. AHCC may have good potential but it is not a replacement for traditional treatment.

Another study was performed with patients with pancreas ductal adenocarcinoma. The cancer was not able to be surgically removed. Patients received gemcitabine treatment, a chemotherapy agent. Those patients that also took AHCC alongside gemcitabine had less adverse side effects, longer median survival time, and higher survival levels overall. This evidence further supports the use of AHCC as a complement to chemotherapy [2.].

Treatment of pancreatic cancer cells with AHCC can reduce the levels of CUB domain-containing protein 1 (CDCP1), a glycoprotein that is increased in various cancers. In addition, in the presence of AHCC, malignant progression was inhibited. Malignant progression refers to the fact cells transform from benign to malignant and, therefore, will grow uncontrollably and can spread to local tissues [3.]. AHCC appears to stop this advancement from non-cancerous to cancerous cells.

A study using ovarian cancer cells and the AHCC compound showed that the growth of cells in the presence of AHCC was significantly decreased when compared to the control. The authors of the study proposed AHCC as a potential complementary and alternative therapy for protecting against tumor growth [4.].

The overall survival rate of patients with liver cancer remains unsatisfactory, and new therapies are urgently required. Patients with confirmed liver cancer, taking AHCC had a significantly increased survival when compared to those not taking AHCC. In addition, after three months, those taking AHCC reported an improvement in the quality of life [5.].

Castration-resistance prostate cancer (CRPC) is not curable and has limited treatment options. The median survival for patients is 18 months. A 66-year-old male had CRPC that had also spread to the lumbar region of the back. The male received radiotherapy treatment for cancer in his back, and he self-administered the AHCC mushroom supplement. Approximately four months of AHCC self-administration saw a dramatic decline in blood levels of prostate-specific antigen (PSA) [6.]. PSA is a marker in the blood produced by prostate cells; the higher the levels of PSA, the more cells expected, such as when a tumor is present.  Whilst this is a stand-alone study, it certainly proves very promising.

A study in mice representing a breast cancer model saw mice given anticancer hormone agent letrozole, and AHCC together. The researchers reported tumor cell death properties that were greater than AHCC or letrozole alone [7.]. AHCC alone did see a greater level of cell death when compared to non-treated control mice. This data again supports the potential for the use of AHCC alongside conventional cancer treatments.

One of the most reported therapeutically beneficial effects of AHCC, is its immunomodulatory effect. Mouse models have already shown that AHCC can activate the immune system, in particular Natural Killer (NK) cells. These cells are important in responding to pathogens and improving survival times after infections. A large amount of the carbohydrates found in AHCC are composed of glucans, and they are thought to alter the immune response by influencing cell receptors (toll-like-receptors). These receptors are essential for recognizing the presence of pathogens and then directing the immune cells to deal with the infection [8.]. The ability of AHCC to activate NK cells is of particular importance in cancers due to their cytotoxic capabilities and may explain the mechanisms of action.

There is no data available for humans, but in animal models, AHCC administered at 500mg/day to 5g/day led to less severe common influenza virus symptoms, increased survival, quicker virus removal from the lungs, and a quicker recovery [9.]. This is of particular importance during times of a viral pandemic.

AHCC was tested for its ability to act as an antioxidant in the rat model of induced oxidative stress. In rats pretreated with AHCC, normal parameters of oxidative stress markers were restored in the liver and kidneys. This provides evidence for AHCC as a potent antioxidant and potential agent to protect against diseases caused by oxidative stress [10.].

High-risk HPV can cause cervical cancer and other cancers, including vagina, vulva, penis, and anus. Preclinical studies in both cell models and in animal models showed clearance of the HR-HPV in the presence of AHCC. It is though that clearance is as a result of immune system support due to AHCC supplementation [11.]. 4 of 6 patients had viral clearance after 3-6 months of 3g of AHCC; 4 of 9 patients were cleared after 7 months when taking 1g of AHCC. This indicated a more benefical dose of 3g/day for HPV.

Participants of a fairly recent study were placed under different stresses, including physical stress, mental stress, and chronic stress. AHCC appeared to improve feelings of anger and hostility, sleep problems, and tiredness. This study indicates that AHCC deserves future attention as a possible treatment to assist with stress management and depression [12.].

There are quite a few testimonials regarding the self-administration of AHCC. Of particular note is the use of AHCC following HPV diagnoses. There are many reporting that the virus completely clears within a month or two. There are suggestions of users going from having CIN2 diagnosis (abnormal cervical cancer cells) to having no abnormal cells within six months having self-administered AHCC. As a result, many are using AHCC long-term, even following clearance of HPV. Some users admit that they have started AHCC following a diagnosis of cancer. One gentleman was recommended AHCC by another cancer survivor and five years later, the gentleman is still using AHCC as he feels that his immune system is strong. Some users report that AHCC is potent against warts and after taking it warts turn black and starting dying within days; these users also report much more energy. Despite warnings of nausea, there appears to be very little feedback in relation to side effects.

Dosages range from 3-9 grams per day, depending on what the user is being treated for. Err on the side of caution and start low (even below 3g), and work your way up. Take with a meal.

The mushrooms used to produce AHCC have been safely used for hundreds, if not thousands of years. There is insufficient scientific evidence to validate any long term side effects as a result of AHCC, but there are reports of some side-effects including fatigue, an increase in temperature, stomach irritations such as bloating, and diarrhea; some have reported itching and cramping of the feet. Generally, AHCC appears very well tolerated, and animal studies show a very low potential of toxicity when administered short and long term. There may be contraindications to taking AHCC; it is always important to check with a medical practitioner to ensure that AHCC will not interfere with any current medications being prescribed. Do not take AHCC is pregnant or breastfeeding, always seek advice from a medical professional.

There are two main players when it comes to AHCC supplements, “Quality of Life” and “ImmPower”. Both are highly regarded and are comparable on price. They both use “Propritary Blends” with the only difference being that QOL contains 750mg per capsule and ImmPower contains 500mg per capsule. Each bottle contains 50 capsules each. That might be important for dosage reasons. I’ve personally used both and they are both quality products, reviews suggest the same.

At the end of the day if I had to choose one supplement to be considered the best AHCC Supplement it would be Quality of Life (QOL) because they’ve been around longer and have a more intimate knowledge of AHCC.