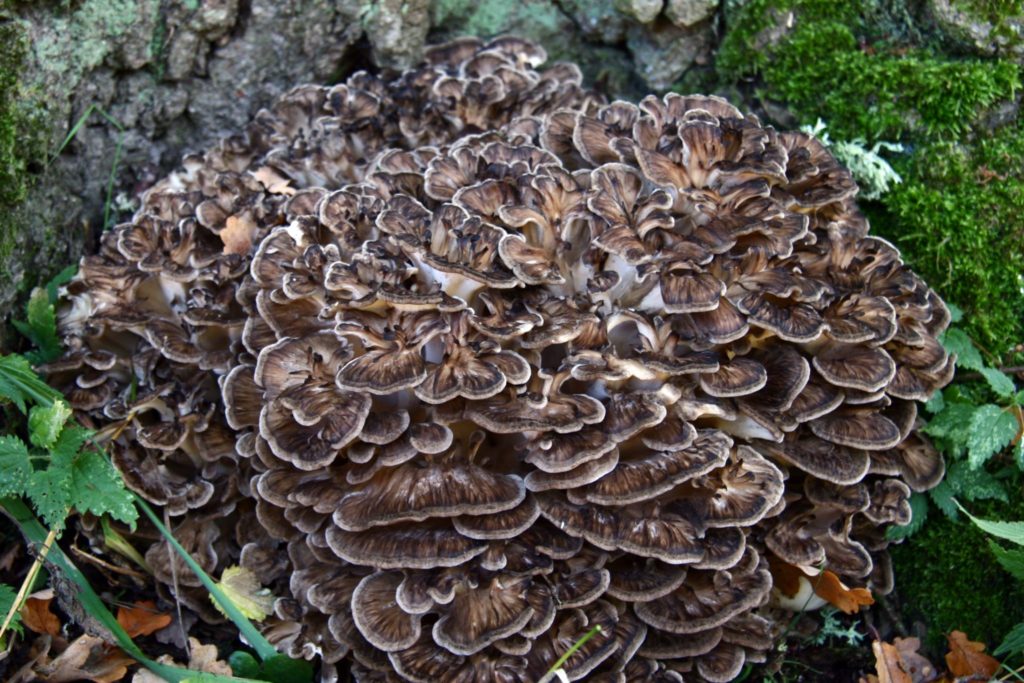 “Maitake[i]” is the Japanese name for Grifola frondosa. English common names include hen-of-the-woods (not to be confused with chicken-of-the-woods, which it does not closely resemble), sheep’s head, and ram’s head, but many English speakers call it Maitake.

Maitake[ii] is a widespread (but also exotic) very large polypore mushroom used as both food and traditional folk medicine. In recent decades, scientific research has begun at least tentatively supporting the mushroom’s medicinal use.

Pore Surface: extends most of the way down the stem. Gray aging to white, then yellowish. Does not bruise.

Edibility: cap is considered choice when young but grows tougher with age. Stem is tough and rarely eaten.

Habitat: grows near the base of certain trees where it feeds on dead or possibly living wood. Experts disagree on whether the fungus harms living trees. Oak species are its favorite, though it will also feed on chestnuts, elms, and maples.

Maitake grows in parts of Asia, Europe, and North America; in North America, it is common in the east but rare in the Rockies and westward. It often fruits from the same part of the same tree year after year in the summer and autumn. It resembles two other mushrooms, Meripilus sumstinei and Polyporus umbellatus, but experienced mushroom-hunters need not have difficulty differentiating among the three.

Maitake has a long history as folk medicine in both Japan and China, and it is popular among modern enthusiasts of alternative medicine. Conditions that Maitake may be helpful for include the following[iii]:

But while folk medicine can indeed be effective, it is not so always; the fact that a practice is traditional is no guarantee that it works, or even that it is safe, hence the importance of scientific research. Unfortunately, there has been comparatively little research on the effectiveness of the traditional methods. As is true of many mushrooms and plants used in folk medicine, the research has focused on the biochemical activity of individual substances found in the mushroom, substances that could be used to produce pharmaceutical drugs.

Maitake presents an added complication in that much of the available research on the medicinal potential of the mushroom have involved commercially-available products, either alone or in combination with a powdered form of whole Maitake. These products include several extracts of various polysaccharides, notably D-Fraction, MD-Fraction, and MX-Fraction[iv]. Because these products are patented and sold commercially, much of the material about them online is advertising of one kind or another. It can be difficult to find information on them from independent sources—and it is difficult to find any research done on either unpatented Maitake polysaccharide extracts or on whole Maitake alone.

That being said, Maitake polysaccharide products are already in use, especially in Asia, and there is research that at least appears to back up their effectiveness. There are also other chemical constituents of the mushroom, besides polysaccharides, that have medicinal potential and are being researched.

Extracts made from Maitake have proven effective at preventing breast cancer in experiments involving animals, and the biochemical mechanisms involved have been studied[v]. The hope is that mushroom-derived substances can be given to women with a very high breast cancer risk instead of the standard preventative drugs, which have difficult side-effects. Another extract slowed the growth of human gastric cancer in cultured cell lines[vi]. Several case studies suggest that Maitake extracts may be helpful against a whole range of cancers, though some experts have questioned the validity of that research[vii].

A small number of HIV patients given a Maitake extract showed somewhat ambiguous, but overall encouraging results[viii]. While only a minority of participants saw their viral load drop (some saw their viral load increase), a majority experienced clinical improvement according to some measures, and a large majority reported improvement in their “sense of well-being.” The study had no control group and was not blind, meaning that a placebo effect cannot be ruled out as the cause of improved sense of well-being. But while it would be wrong to conclude that Maitake can cure HIV, it is possible such extracts could have a role as supportive therapies.

“Fatigue” is a complex process that is not fully understood but can occur in several different contexts and may be caused by several different mechanisms, some of them protective and helpful, others less so. Chronic fatigue, specifically, is a form of fatigue that does not get better with rest and is considered a serious medical problem. While stimulants can mask the symptoms of fatigue in the short term, they do not treat the underlying problems that cause fatigue in the first place. Maitake is one of several mushrooms shown to have the potential to address at least part of the fatigue process[ix].

In an in vitro study, an extract of Maitake proved able to inhibit the activity of the hepatitis B virus, either along or when combined with interferon. The combinations of Maitake extract and interferon produced a much stronger effect than either could alone[x].

Rats deliberately made diabetic and then fed a diet that included a Maitake extract became more tolerant of glucose than diabetic rats who had not received the extract[xi]. Mice bred to develop diabetes showed improvements in a number of measures after treatment with a different Maitake extract[xii].

A certain Maitake extract was shown to reduce certain types of allergic response in mice[xiii]. Intriguingly, the authors thought their results might indicate that whole Maitake, consumed as a food, might be able to reduce allergies in humans. For a study to suggest a food, not a pharmaceutical derived from the food, might have medicinal value, is somewhat rare.

Polycystic ovarian syndrome, or PCOS, is a hormonal condition involving both androgen and insulin that interferes with the functioning of the ovaries. Among other problems, people with PCOS seldom ovulate. Because Maitake has been shown to reduce insulin resistance in diabetics, and because insulin resistance is also a feature of PCOS, a research team wondered if Maitake could also effectively treat PCOS. In a study that assigned PCOS patients to a standard treatment, to a Maitake extract, or both, a majority of subjects ovulated. Further, several who did not ovulate on the single-substance treatment did ovulate when given both the standard drug and Maitake, and several who did not respond to the standard drug did ovulate on Maitake alone[xiv].

Research-based dosage guidelines are not yet available. Users should defer to the judgment of experienced practitioners able to make intelligent, educated guesses.

It is important to remember that dosing is likely to vary for different Maitake products since these may contain very different substances. And proper dosing for extracts is very different than for whole mushroom; since Maitake is a food, most users should be able to eat it freely, the important question being how much is necessary to have a therapeutic effect.

Maitake Mushroom Side Effects and Toxicity

Maitake has been used as food for generations and is therefore generally recognized as safe, although there hasn’t been enough research to be sure[xv]. Some people experience nausea after using Maitake. Allergies are always a possibility. And the very fact that Maitake shows promise as a treatment for diabetes suggests that diabetics using the mushroom for other reasons might need to adjust their medications.  Maitake can also interfere with Warfarin, as well as increasing white blood cell counts[xvi].

It’s also worth noting that while Maitake is generally safe to eat, extracts and concentrates could be a different story because the relative levels of the chemical constituents will be different than in the whole mushroom; it is possible that as-yet unknown risks could exist for extracts that are not a problem with traditional use.