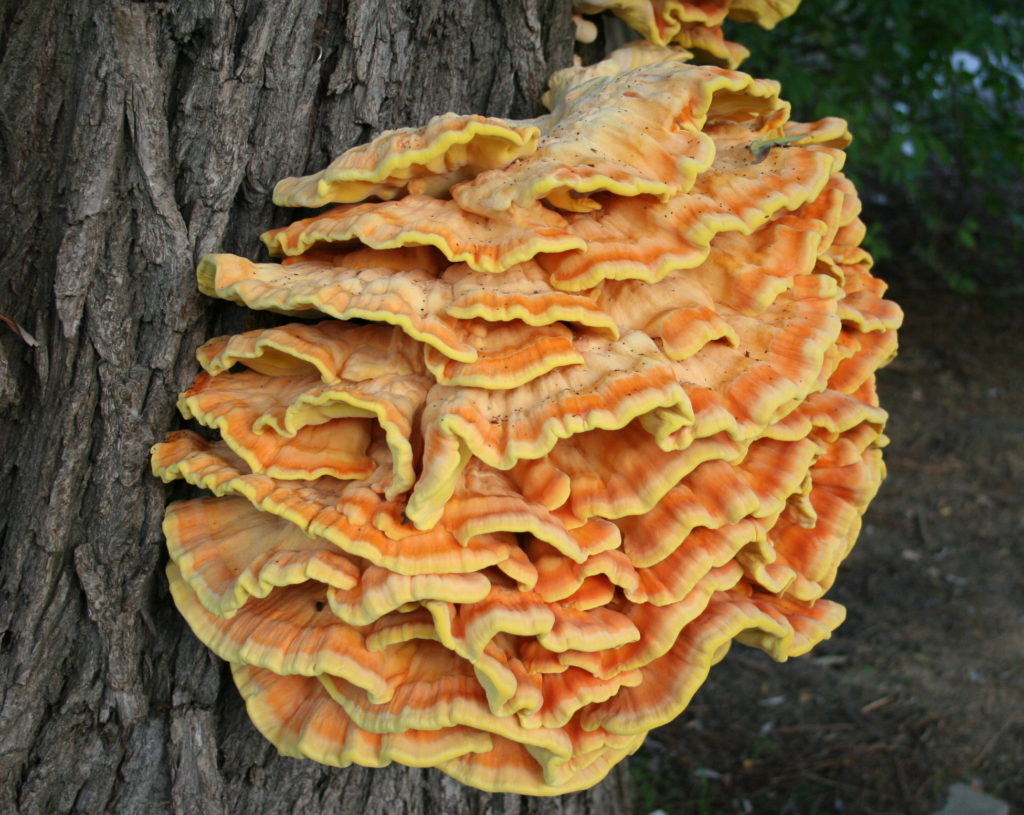 Chicken-of-the-Woods, often fondly shortened to “chicken” by enthusiasts, is one of the common names of Laetiporus sulphureus, and possibly of several closely-related fungi as well. The name refers to the taste, as the mushroom reportedly makes a good substitute for chicken meat if well-cooked. It should not be confused with hen-of-the-woods, which is not closely related and does not resemble chicken-of-the-woods. Alternate names include crab-of-the-woods, sulfur polypore, and sulfur shelf.

Besides being a favored edible mushroom, chicken of the woods is also used medicinally in some traditional cultures[i] and recognized as useful by some herbalists[ii]. Scientific research has begun confirming some of the claims made for this fungus.

Chicken of the Woods Mushroom Identification and Description

Cap: Fan-shaped, semicircular, or irregularly-shaped with a suede-like surface texture.  Yellow, orange, or yellow-orange when young, fading to whitish when old.

Pore surface: Yellow or, rarely, white, becoming duller with age. Does not bruise.

Taste: Chicken-like, at least when cooked

Habitat: On living or dead oaks and other hardwoods. Fruits from the trunk, sometimes high up.

Chicken of the woods is often described as an easy edible to identify, and it is certainly distinctive-looking, with masses of large yellow to orange shelves erupting in a tight group from a dead or dying tree (solitary fruiting bodies can occur but are rare). But in fact the fungus has several look-alikes, some of which may be  at least mildly toxic[iii]. In North America, at least, the key is to notice where the fungus is growing. Chicken of the woods has an eastern distribution only, feeds on oaks and some other hardwoods, and fruits from the trunk, often high above the ground. Only one look-alike shares the same range as chicken and feeds on hardwoods, and it rarely fruits from higher than the base of the trunk—sometimes it fruits from the roots, something chicken does not do.

However, an added complication[iv] is that genetic studies have revealed that European chicken of the woods is not the same species as American chicken of the woods, though the two are indistinguishable by any other means. It is likely that the scientific name of the American species will change to reflect the distinction.

Yet another complication is that many mushroom aficionados use the name, chicken-of-the-woods, to refer to more than one species, a problem compounded by the fact that some otherwise very well-informed writers don’t know the difference between species and subspecies. The result is that there is a lot of contradictory information out there as to where and how chicken grows and how much it can vary, since writers are not always referring to the same mushroom.  While many people prefer to forage their own, it is possible to buy chicken-of-the-woods fresh or dried, in which case the buyer should be careful to ascertain exactly what species the product really is.

Chicken of the Woods Mushroom Benefits

The most obvious benefit of chicken-of-the-woods is that it’s edible, at least while the fruiting body is young (older fruiting bodies get tough and brittle). Not only is it a good vegetarian chicken substitute, but it’s a low-calorie, low-fat, high-protein food. A 100g serving has only 33 calories, but 14g of protein, and it’s a good source of potassium and Vitamin C[v]. Compare that to a serving of chicken breast (the kind with feathers) of the same size, which has double the protein but five times the calories[vi]. Plus, all mushrooms are cholesterol-free, whereas birds are not.

Chicken-of-the-woods is considered an exotic mushroom and has a long history of use in folk medicine, especially in Europe. It is known for fighting infections (it has also been powdered and used as snuff)[vii]. Modern research has shown that the mushroom has a large number of biochemical constituents, many of which have medicinal potential—and some are already in use in a variety of products[viii]. The following properties, and others, are either known or suspected for the mushroom:

Chicken-of-the-woods, or extracts from the mushroom, can suppress the growth of a number of microorganisms, such as gram-positive bacteria, including methicillin-resistant Staphylococcus aureus (MRSA), Candida (a normally benign yeast that can over-grow and cause several human diseases),  and Aspergillus flavus, a mold that produces a carcinogenic toxin. Substances isolated from the mushroom can also remove denture and dental plaque and are used in commercially-available dry-mouth treatments.

On a less-useful note, one of the bacteria types chicken-of-the-woods can suppress is the one used to ferment both pickled cucumbers and sauerkraut, meaning that the mushroom itself is probably impossible to pickle.

Both chicken of the woods or substances extracted from the mushroom have either suppressed the growth of, or actually killed several different cancers, either in mice or in cultured cell lines in vitro. The cancers involved include stomach cancer, leukemia, lung cancer, breast cancer, melanoma, and liver cancer. One of the substances identified as potentially anti-carcinogenic can now be synthetically produced and is being further investigated.

One substance found within chicken of the woods mushroom promotes the creation of estrogen by the body, and could become part of a treatment for health problems involving low levels of estrogen. Another may be able to undo radiation damage to certain bodily processes involving testosterone and androgen, and may thus be useful for cancer patients who have received radiation therapy.

A substance found in chicken and certain other polypore mushrooms increases sensitivity to insulin and also improves several other processes related to diabetes, including reducing blood sugar in animals. The substance has promise as a possible treatment for type II diabetes and related problems, such as obesity.

There are other intriguing possibilities, too. The mushroom contains a substance believed to act as an anti-inflammatory, as well as melanin, which is both a free radical scavenger and may be involved in melatonin production and pineal gland heath. Chicken-of-the-woods inhibits the creation of cholesterol, possibly because of the presence of some as-yet unidentified substance that has a synergistic effect with lovatatin, a naturally-occurring, cholesterol-lowering drug. Research in mice suggests that a deficiency of  a substance called CoQ9 causes a specific type of brain impairment; chicken is a source of CoQ9. It is interesting to note that almost all these studies involve substances extracted from the mushroom, not the mushroom itself, and that the research did not involve human subjects. Still, the mushroom has possibilities.

Because chicken is an edible mushroom, it is generally safe to eat in reasonable quantities. Overdose of the mushroom itself is not a serious concern, but under-dose may be—the existence of medicinal substances in a food is not a guarantee that it is possible to eat enough to get a therapeutic dose. But whether using whole mushroom for medicinal purposes or an extract, it is important to follow the guidance of a practitioner experienced with the product in question.

Chicken of the Woods Mushroom Side Effects and Toxicity

Some people have reported adverse effects, including hallucinations, after having eaten chicken-of-the-woods—however, it is difficult to be sure which species of mushroom was really eaten,  Laetiporus sulphureus, or one of its look-alikes. It is therefore difficult to be sure what warnings may or may not apply to L. sulphureus. What is clear is that proper identification is very important, though it is possible that Laetiporus sulphureu, too, has mildly toxic properties under some conditions—or, some people may simply be allergic to it.

In any case, chicken-of-the-woods, like many mushrooms, should not be eaten raw.

7 thoughts on “Laetiporus Sulphureus: Chicken of the Woods Mushroom”