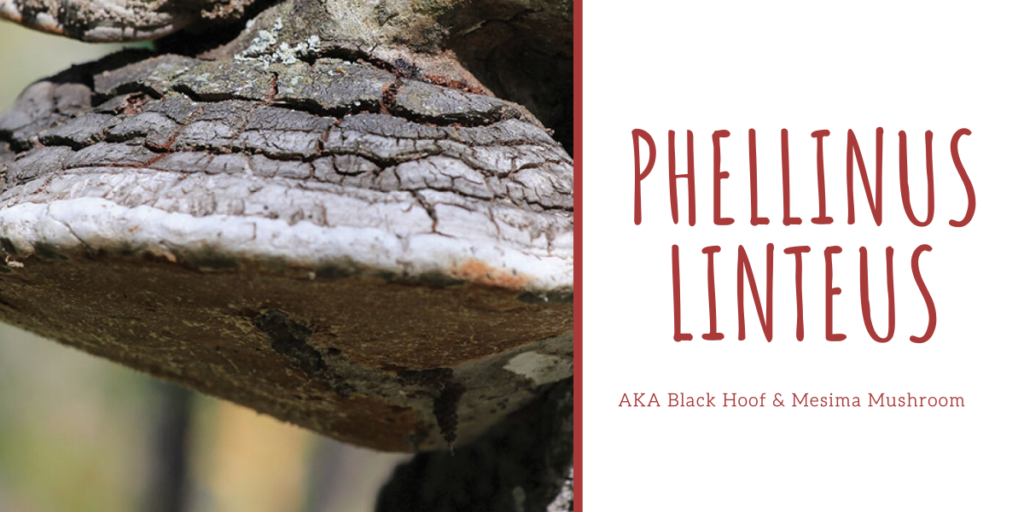 Phellinus linteus[i] is a fungus that feeds on the wood of several types of trees, including mulberry, and produces a woody, perennial fruiting body shaped a bit like a large hoof. It grows wild across much of the world, and is an important part of traditional folk medicine in parts of Asia. Its common name in English is the descriptive “black hoof,” but English speakers are often more familiar with the scientific name, or with one of the Asian names. The mushroom is “sangwhang” in Korea, “sanghuang” in China, and “meshimakobu” in Japan (or “mesima” for short).

Curiously, there has been some debate as to whether the mushroom identified in the folk tradition actually is P. linteus, as opposed to one or more closely-related species that are difficult to tell apart. The lack of clarity adds an interesting dimension to the research currently being done as to the real medicinal properties of the fungus.

Gills: This species has pores, rather than gills. The pore surface is pale reddish or yellowish brown when fresh and brown when dried.

Stem: absent. The fruiting body grows shelf-like from its substrate.

Edibility: Not toxic, but not palatable, either.

Habitat: Feeds on the trunks of several hardwoods.

Possible benefits for P. linteus use suggested by research include[vi]:

A study showed that treatment with an ethanol extract of P. linteus reduced the inflammatory response of mice in whom asthma had been induced[vii]. Previously, the use of the mushroom in treating asthma had not been well investigated.

A hot-water extract of P. linteus lowered blood glucose levels in rats experimentally given diabetes but did not prevent the development of diabetes[viii]. In contrast, a polysaccharide isolated from P. lineus did prevent diabetes in mice with an autoimmune disease that otherwise causes diabetes[ix].

Polysaccharides isolated from P. linteus sensitized colon cancer cells so that a standard chemotherapy agent could kill the cancer at a much lower dose, thus minimizing harmful side-effects; non-cancerous colon cells were unharmed[x].

In both in vitro studies and in animal studies, a water extract of P. linteus killed human prostate cancer cells; in the animal studies, human cancer cells were injected into mice[xi]. In the mice, the mushroom extract could not prevent the growth of tumors but did slow it. One man with a difficult-to-treat form of prostate cancer experiences a sudden remission after consuming P. linteus[xii]. A single case is by no means proof, but it does suggest possibilities.

In one in vitro study, P. linteus showed itself able to interfere with the ability of human breast cancer cells to go through the steps necessary for successful metastasis and invasion[xiii].

There have been very few clinical studies in human patients yet, and the mushroom’s value as a treatment for cancer has not been proven, but there is reason for optimism.

Phellinus linteus contains several polysaccharides that, in in vitro studies, alter a number of biomedical pathways suggesting real immunomodulatory activity[xiv] that could be part of the mushroom’s cancer-fighting potential[xv] and has also effectively treated mice experimentally given a form of allergy-induced eczema[xvi]. Anti-inflammatory properties studied in cell cultures also suggest extracts of the mushroom may be useful against certain types of allergy[xvii].

The mushroom can also do what the immune system alone cannot. An extract of the fruiting body was effective against several strains of antibiotic-resistant Staphylococcus aureus[xviii]. Another study tested a different extract’s effectiveness against cultures of a group of pathogenic microbes and found that the mushroom does have potential as an antimicrobial agent[xix].

The vast majority of research on P. linteus has involved only cell cultures. Some involve animal models. Very few have involved human subjects. There is thus a lack of reliable information on dosing—but that does not mean that dosing can be ignored. Too much or too little might have poor effects or none at all. Users can follow the recommendations of traditional practitioners, since P. linteus does have a long history of medicinal use, but research results will still be useful to discover whether the traditional uses are optimal.

It is worth noting that multiple types of extracts and other P. linteus products exist, and they do not necessarily always have the same effect, since preparation method can alter the chemical properties of the product. It is important to discuss specific products, as well as dosing, with an experienced practitioner.

Phellinus linteus Side Effects and Toxicity

Despite being sometimes recommended as immune-system support, P. linteus use can exacerbate at least one autoimmune disease, specifically pemohigus[xxi]. Otherwise, short-term studies have shown no indication of toxicity, but there have been no studies of possible long-term problems[xxii]. Despite the well-documented history of extensive human use, it is possible that some negative effects exist. Caution is in order.

2 thoughts on “Phellinus linteus: Science Based Benefits of the Mesima Mushroom”