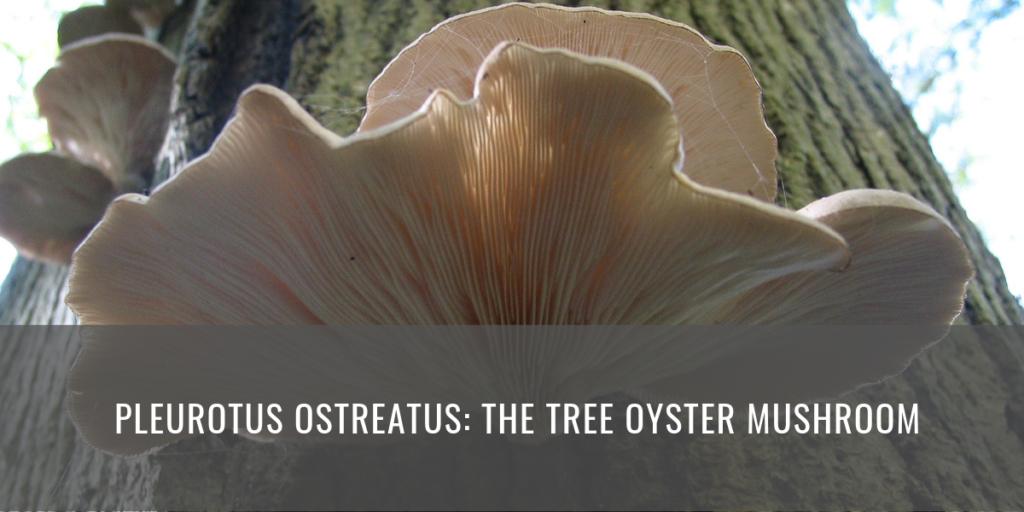 Pleurotus ostreatus is a popular edible mushroom in the oyster mushroom group, commonly known as the pearl oyster or the tree oyster mushroom. It resembles several other oyster species, often having a shelf-like fruiting body with a pale brown-topped cap. It is native to North America but widely cultivated for food; the taste is said to be mild and the texture very tender, though the short stem or stipe can be tough[i]. The blue oyster mushroom, which is also cultivated for food, is a European subspecies.

Besides feeding on living and dead wood, this fungus also kills and eats nematodes and bacteria; since nematodes are animals, that classifies P. ostreatus as both an omnivore and a predator[ii].

Many species of oyster mushroom have been used in folk medicine or Traditional Chinese Medicine, and many species are known to contain chemical substances that have medicinal potential[iii].

Many authors discuss the health benefits of oyster mushrooms only as a group, not as individual species, a tendency that makes it hard to tell which studies apply to P. ostreatus, but also at least implies that all oyster mushrooms have similar chemical constituents and similar medicinal potential. These potential benefits an impressive nutritional profile and both antioxidant and antibacterial properties[v]..

Oyster mushrooms contain very little fat and are, as a percentage of dry weight, high in both protein and fiber, as well as riboflavin and niacin, and, to a lesser extent, many other vitamins[vi]. Mushrooms categorically never have any cholesterol, since cholesterol is only made by animals. Mushrooms are not a practical dietary staple, since their water content is so high that a nutritionally significant serving would have to be impractically large, but what nutrition is there is of high quality. Many people also appreciate oyster mushrooms as a way to pack a lot of flavor and texture into a meal without adding a lot of calories, meaning the very quality that makes the mushrooms a poor staple makes them a very healthy luxury food.

A review of the available research showed that P. ostreatus is an unusually rich source of several substances with known antioxidant effects; the mushroom, or substances derived from it, have shown health benefits in experimental conditions involving rats[vii]. The review did not capture any clinical studies involving human subjects.

One study[viii] tested three different extracts of P. ostreatus against multiple species of bacteria and fungi; while some extracts worked better than others, and some microorganisms were more sensitive than others, in general, the extracts were effective at inhibiting microbial growth. The study also identified the substance responsible for the effect. However, the study did not test the mushroom’s effect on living test subjects, human or otherwise.

A number of studies have looked at P. ostreatus as a potential treatment for certain types of cancer. For example, in one, erythroleukemia cells were treated with either a substance extracted from the mushroom, heat, or both. The mushroom substance did kill some of the cancer cells, but was more effective in combination with heat[ix]. Another study compared the effect of three different edible mushrooms against breast cancer cells and colon cancer cells; of the three, P. ostreatus was the most effective against the cancer while also not harming normal breast and colon cells[x]. Another study tested protein extracts from three edible mushrooms, including P. ostreatus, on cells from colorectal cancer and leukemia; all three effectively killed cancer cells through a variety of biochemical mechanisms[xi]. These studies involved cultured cell lines, not the treatment of actual cancer in living subjects.

Rats with high cholesterol who received a P. ostreatus supplement with their feed both had their blood cholesterol levels drop and they also excreted more fat in their feces, but did not show adverse effects from the supplement[xiii].

Also, as noted elsewhere, mushrooms are a cholesterol-free, low-fat food, characteristics that are also useful for anyone attempting to lower their cholesterol levels.

The Pleurotus genus includes many species, and the term “oyster mushroom” applies to all of them. Some have been these have been the subject of medical research, and appear to be at least potential sources of new treatments of various kinds, but few such treatments have been clinically tested and there is a lot that is not known[xiv]. While different oyster mushroom species can have different properties and it would be inappropriate to treat them all as medically interchangeable, the members of this genus often share similar chemical constituents; the medical properties of one species hint at those of another. To understand the potential benefits of P. ostreatus, it is therefore useful to take a look at the other members of the group.

Pleurotus mushrooms and mushroom extracts have also been used as ingredients in cosmetics and as additives in fermented dairy products, such as yogurt.

Few, if any, of the Pleurotus extracts used in medical research are available commercially, and many have never been tested in living beings of any kind, let alone in humans. Dosing information for those extracts is either not available or, in the case of products that aren’t sold, irrelevant. Few studies have involved the whole mushroom.

Persons wishing to use P. ostreatus medicinally should consult a qualified practitioner able to make a guess based on the minimal information available and their own clinical experience.

It is worth noting that while certain extracts could possibly be dangerous at high doses, and while a dose that is too low won’t help medically, P. ostreatus can be freely and safely eaten as food; as long as a user simply adds reasonable amounts of the whole mushroom to the diet, the dose should be within the safe zone.