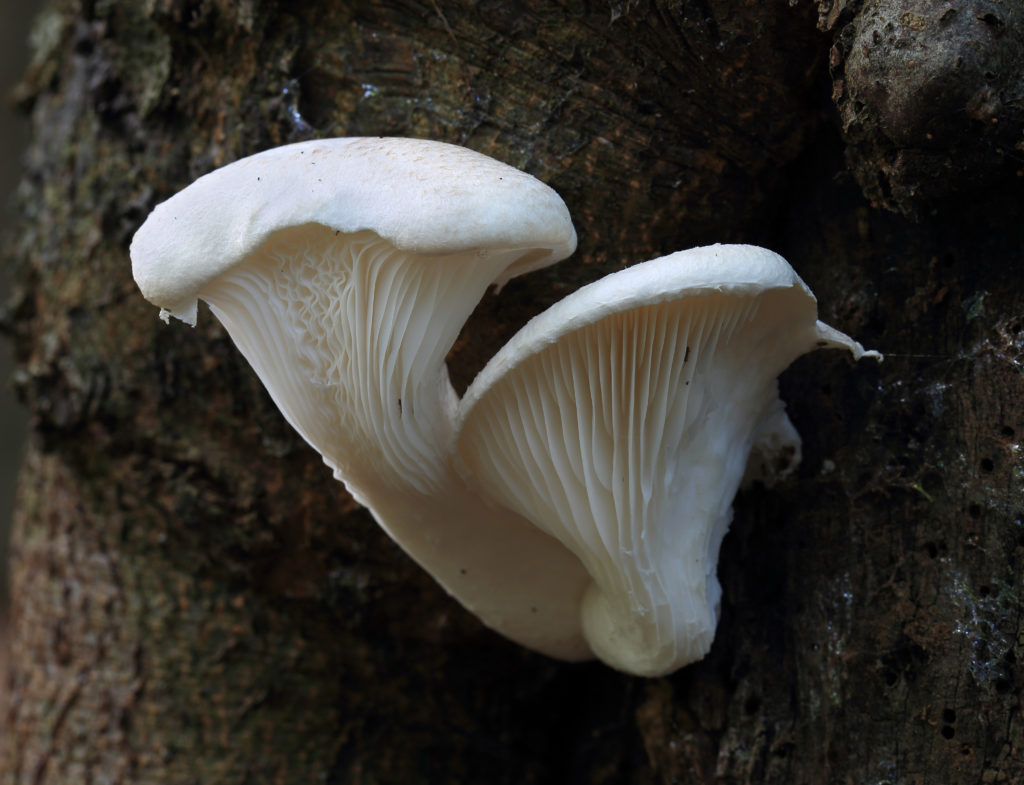 Oyster mushrooms are one of the most popular edible mushrooms worldwide and have their name due to the oyster shell-shaped cap. The veiled oyster mushroom is also so-called because of the partial veil left on the edge of the cap and stem, they are quite stunning to look at. They can fruit alone but can also produce quite a spectacular display in small clusters. Pleurotus is Latin for ‘side ear’ describing the angle and form at which the mushroom grows on the wood it is attached to. Dryinus means ‘related to oak’, a preferential host for this fungus because the veiled oyster mushroom is commonly sighted around oak and beech trees, in forests of North Carolina Piedmont. It also grows throughout the United Kingdom, mainland Europe, North America and Asia. Most oyster mushrooms are smooth when handled, and the Pleurotus dryinus is in contrast, fuzzy to the touch.

Cap: White or cream, with soft scales, becoming yellowish with age; sometimes described as ‘fuzzy’ or ‘woolly’. Approx. 10cm in diameter, sometimes 13cm. The cap is convex but grow flatter towards the extremities and has partial veil remnants hanging on the margin of the cap.
Gills: White; decurrent and broadly attached forming groves down the stem. The partial veil covers gills while mushroom is young.
Stem: White or cream like the cap; sturdy and stocky: up to 3cm tall and 2cm in diameter. The lower part of the stem is often darker in colour. The stem may be ringed.
Smell: Described as pleasant, and some suggest it has a citrus aroma.
Taste: Edible mushroom but is tough especially with maturity.
Spores: Elongated; cylinder shaped.
Spore color: White.
Edibility: Edible.”
Habitat: Grows on live or dead wood including,  fallen branches or tree stumps. Grow from Spring to Autumn, preferably on Oak trees.
Class: Agorimycetes; Order: Agaricales; Family: Pleurotaceae; Genus: Pleurotus & Species: Dryinus.

The Elm Oyster Mushroom (Hypsizygus ulmarius) like Pleurotus dryinus has a stem and white-cream gills, but the gills do not run down the stem (decurrent). Pleurotus dryinus and Pleurotus levis are also difficult to tell apart. Althugh they are biologically discrete; they are in appearance the same. It is thought that Pleurotus levis is less hairy and grows in warmer climates than Pleurotus dryinus. All oyster mushrooms are considered edible so it would not be detrimental to mix these up. Panus rudis also looks very similar to Pleurotus dryinus, but it lacks a partial veil, some suggest it is not edible however, no toxic data is available. Others report it may be eaten while it is tough [4.] perhaps providing an explanation as to why it is inedible. As with all mushrooms, it is imperative to know the exact genre and species of the mushroom before consuming.

Pleurotus dryinus has been described as a weak parasite for trees, particularly broad-leaved trees; however, it also appears to have anti-parasitic properties [1]. Dogs and cats are potential carriers for parasitic organisms such as nematodes (round worms) and bacterial, viral and fungal agents; this may affect human health. Nematotoxin is a toxin that is produced by Pleurotus genre of mushrooms and is capable of immobilization of nematodes. In vitro trans-2-decenedioic acid, a toxin has been shown immobilize nematodes [2.] and extracts taken from Pleurotus dryinus have been shown to paralyze, and the hyphae invade nematodes [3.].

Pleurotus dryinus is an edible mushroom and abundant through the summer in North Carolina. Some of the younger specimens are very tasty like most oyster mushrooms, but the mushroom can be quite tough and fuzzy; this is especially true for the larger and more mature mushrooms. It s suggested it should be skinned and then sliced before cooking for best results.

There is no data for the toxicity levels of Pleurotus dryinus and no reported side-effects.