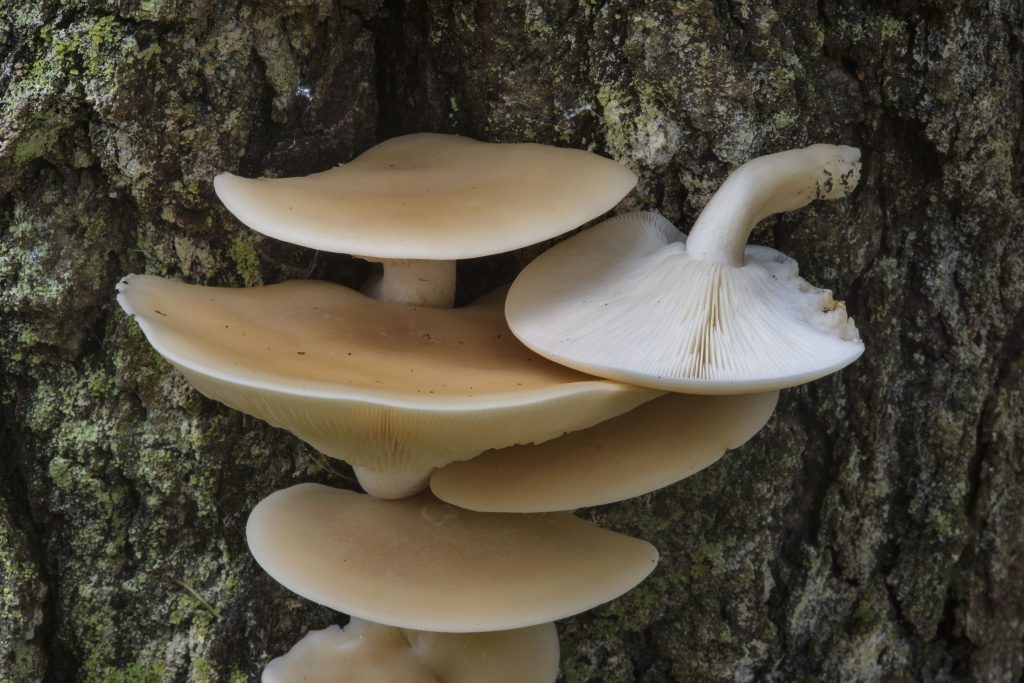 Hypsizygus ulmarius, commonly known as the Elm Oyster Mushroom, is a rather uncommon edible mushroom found in the deciduous forests of Europe and North America.

H. ulmarius belongs to the very small and relatively new genus of Hypsizygus, which contains two other species namely H. tessulatus and H. marmoreus with which H. ulmarius is often confused.

Etymologically, “hypsizygus” means growing “high up”(Hypsi-) on tree “yolk”(-zygus), denoting the fact that this species is often found growing high up on the trunks of living trees. As for “ulmarius”, this reflects the preferred growth substrate of this species, the elm tree (Ulmus).[i]

The taxonomic journey of this species, similar to many other gilled species, is a long one. This species was first described by notable French mycologist Jean Baptiste Francois Pierre Bulliard in 1791, who placed it in the genus of Agaricus, where most gilled mushrooms ended up in the early days of mycology, and called it Agaricus ulmarius. Over the next two centuries, this species was moved around and changed its name a few times. First being rather incorrectly reclassified into the genus of Pleurotus and then renamed Lyophyllum ulmarium, it was not until 1984 when the Canadian mycologist Scott Redhead created the genus of Hypsizygus that this species received its current name. Fortunately, recent morphological and molecular DNA studies support the creation of this small and unique genus by Redhead and it looks like that Hypsizygus ulmarius is done being reclassified, at least for the foreseeable future.[ii]

Due to the interesting taxonomic history of this species, Hypsizygus ulmarius may also be referred to in mycological literature by several other names. These names include Agaricus ulmarius, Pleurotus ulmarius, Tricholoma ulmarium and Lyophyllum ulmarium.

Cap: The cap and fruiting of this species are quite variable in both size and color. The average size of the cap is approximately 6 to 15 cm, however, exceptionally large specimens with caps up to 30 cm in diameter have been reported.  The cap in young specimens is convex with incurved margins, but with age the cap flattens out, often developing a pattern of cracks but retaining its incurved margin. The color of the cap is variable and depends on the growth habitat and substrate. Most commonly, the cap is white  to creamy buff to tan. The texture of the cap is dry and smooth.
Gills: The gills are broad and crowded. They are adnate but not decurrent, meaning they attach but do not run down the stem. The color of the gills is white, but they can become cream-colored with age.
Stem: The stem is solid and stout and measures 5 to 12 cm in height and 2 to 3 cm in diameter, sometimes with a basal enlargement. It is white, dry, fibrous, and can either be smooth or finely hairy. The stem attaches to the cap centrally or slightly off center. The stem does not have a volva nor does it have a remnant of the universal veil. As this mushroom often grows in clusters, multiple fruiting bodies emerge from a single branch scar, which means that the stems of this species are almost always bent.
Spores: Spores are broadly ellipsoid, smooth, and measure 5.5 to 6.5  by 3 to 5 µm.
Spore Print: The spore print is white to pale cream.
Smell: Non-specific odor.
Flavor and Edibility: This species is definitely edible, but does not appear to have a distinctive taste. Furthermore, due to Hypsizygus ulmarius being a relatively inaccessible species and “out of the way” high up in the trees it is of little interest to mild mushroom foragers.
Habitat: Hypsizygus ulmarius is a parasitic or saprophytic species. These mushrooms are found growing solitarily or in small clusters on damaged parts, scars, and old branches of living hardwoods. It has a particular preference for elm and boxelder trees.
Range: This species grows ubiquitously in temperate deciduous forests of Europe and North America.
Growth Season: Hypsizygus ulmarius fruits from August to December. The. Fruiting bodies of this species are “long-lived”, meaning they do not decay rapidly.

This species is frequently confused for its relative Brown Beech Mushroom, Hypsizygus tessulatus. These two species are quite similar in size and appearance but several features can be used to differentiate between these two species.[iv]

Another less common look alike is Pleurotus Dryinus as it has a stem and white-cream gills.

Hypsizygus ulmarius can be cultivated with both home cultivation kits and pure cultures available commercially.

This species can be cultivated in wooden logs, mushroom beds, bales of straw, or even special cultivation bags designed for greenhouses.

Hypsizygus ulmarius is known for its “medicinal” properties, however accurate and legitimate scientific proof is lacking to support the claim that this species, or any other species of mushroom, is capable of curing any disease.

Regardless, certain researchers seem to suggest that aqueous extract from this species contains certain natural compounds that have a variety of antibacterial, antifungal, antidiabetic, antiinflammatory, anticancer, and antioxidant properties.[v]

Hypsizygus ulmarius is an edible species used in cooking, much in the same way as typical Oyster Mushrooms. It contains no toxic compounds nor does its consumption pose any safety risks.