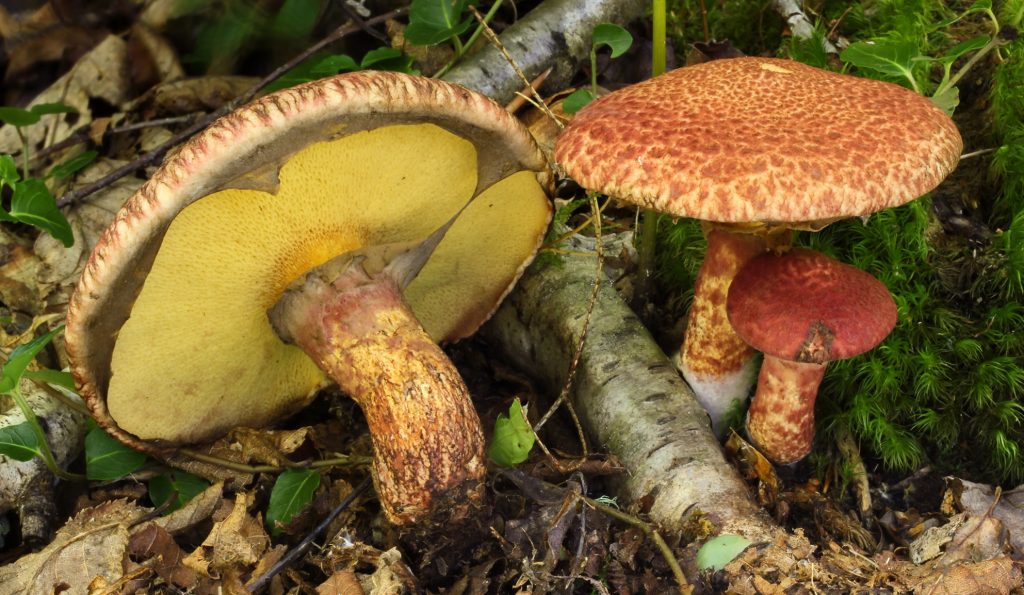 Suillus spraguei, often referred to as Suillus pictus in mycological literature, refers to the commonly known edible bolete, the painted slipperycap. This fungus has a characteristic dry, rose-brick, scaly cap, with small yellow angular pores which make it one of the most pretty fungi in the family of Suillaceae and a joy to find while foraging.[i]

The taxonomic history of this species is rather a long and complex one. This fungus makes its first appearance in mycologic literature in an 1872 descriptive work by the notable British and American botanists Miles Joseph Berkeley and Moses Ashley Curtis under the name “Boletus spraguei”, which was a homage to the American botanist and lichenologist Charles James Sprague who had originally collected this species in 1865 in Massachusetts. Soon after Berkley and Curtis’ publication in 1873 another American Mycologist, Charles Horton Peck, also described the same species but under the name “Boletus pictus”. Yet again, in the first half of the 20th century, it was made apparent that the name “Boletus pictus” closely resembled the name of another polypore mushroom and was thus illegitimate and had to be changed. Due to this, the species was reclassified into a different taxon and officially had its name switched to “Suillus spraguei” in the late 1980s. Other sources, however, claim that the switch in taxonomy and nomenclature occurred much earlier during the turn of the 20th century, and hold the German botanist Otto Kuntze responsible for it. As such, one may come across this species of mushroom under various names such as Boletus spraguei, Boletus pictus, Suillus spraguei, Suillus pictus, or even Boletus murraii.[ii]

Another confusing aspect of this specific fungus is its common name. Although, Suillus spraguei is colloquially known as the “painted slipperycap” and as the “slipper jack” there is nothing slippery about it. This specific species is a unique outlier of the Suillaceae family because unlike most of its cousins its cap is dry and not sticky to the touch. Hence, the epithet “slipperycap” may be deceiving.

And last but not least unique and characteristic feature of Suillus spraguei is its very host-specific mycorrhizal relationship with Eastern White Pines.

Cap: The cap of this species is 3 to 12 cm across. When young, it is conic to rounded, with an incurved margin, usually with remnants of a whitish partial veil. With age, the cap expands, becoming Bradly conic or nearly flat, sometimes with an upturned margin. As mentioned before, unlike other mushrooms in the family of Suillaceae, the surface of the cap is dry and not moist. However, the surface may be somewhat tacky when wet, especially on younger caps. Suillus spraguei has a rather beautifully colored cap that stands out well in the needle duff. It is densely covered in burgundy to brownish-red fibrillose scales that are separated by yellow cracks. These scales easily wash away to reveal a matte yellow background. The dark red color of the scales and the dull yellow background of the cap is known to fade with age.
Flesh: The flesh is soft and yellow. However, when bruised and exposed to air the yellow flesh will change to a pinkish or reddish grey.
Chemical Reactions: Ammonia, potassium hydroxide and Iron salts turn the cap skin black while the flesh turns olive-black.
Tubes: Suillus spraguei does not have gills but rather a sponge-like polyporous undersurface with a layer of tubes. The tube layer is adnate or decurrent and is not readily separable from the cap. The tubes themselves are somewhat radially arranged, 0.5-5 mm across, 4-8 mm deep, and have angular pore openings. When young, the pore surface is covered by a partial veil, which tears away as the mushroom grows but leaves behind a whitish remnant on the cap margins and stalk. The color of the tube layer is similar to the background of the cap, yellow. Similar to the flesh, the tube layer also bruises to a brownish or reddish color when injured.
Stem: The stem is 4-9 long by 0.8-2.5 cm thick. It is cylindrical and may sometimes have an enlarged base. The surface is yellow at the apex and typically netted from decurrent tubes. The remainder of the stalk is fibrillose. Contains a whitish to the grayish annulus. The stem does not bruise.
Spores: The spores of this species are narrowly oblong, inequilateral, and smooth. They measure 8-12 to 3.5-5 µm.
Spore Print: The spore print is olive-brown to brown.
Smell: Usually no distinct odor, however, if Suillus spraguei does have an odor it is chemical-like and unpleasantly sharp. The smell is reported to get worse when fresh mushrooms are cooked.
Flavor and Edibility: Suillus spraguei is considered edible, but it certainly is not a choice edible. This is thought to be attributed to the unpleasant black color it takes on and the chemical-like smell that intensifies upon cooking. However, S. spraguei can be dried and then reconstituted prior to cooking to improve the taste.
Habitat: This species grows on the ground/in the needle duff alone or gregariously in a specific mycorrhizal relationship underneath Eastern White Pines.
Range: Suillus spraguei is also known as the eastern painted Suillus as it grows mainly in northeastern (Connecticut, Massachusetts, New York, New Jersey, Pennsylvania, Virginia, and Quebec) and some parts of the midwestern (Michigan, Ohio, Ontario) North America.
Fruiting season: Commonly fruits in the late summer and fall.

This species is not easily confused with other species on account of its unique appearance, unique geographic distribution in northeastern North America, and its sole mycorrhizal association with Eastern White Pines.

Regardless, certain of its Suillus may uncommonly be confused with it. The western painted Suillus, S. lakei, grows in western North America and is associated with Douglas-firs. Suillus cavities can be differentiates from our species based on its hollow stalk, more brownish cap, and its association with larch trees.