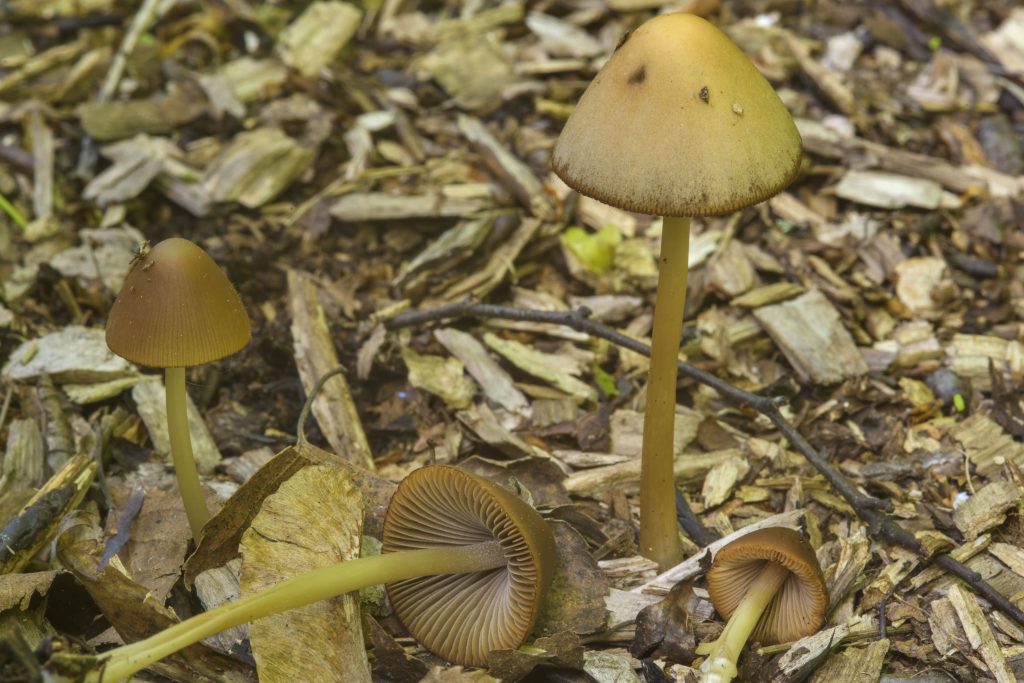 Conocybe tenera is a delicate reddish brown mushroom with a bell-shaped cap on a likewise-colored fragile, ringless stalk more commonly known as the Common or the Brown Dunce Cap. This species is also the “type species” for the Conocybe genus, meaning that it is regarded as the best example of the genus’ generic characteristics. [i]

The taxonomic history of this species is not broad. It was first described by the notable German mycologist Jacob Christian Schaeffer in 1762 and like most gilled mushrooms in the early days of mycology was placed named Agaricus tener. Following this, the notable Swiss mycologist Victor Fayod transferred this species into its current genus and named it Conocybe tenera. This species also has another synonymous name Galera tenera.

From an etymological standpoint, the name of this species is a description of its main characteristics. “Conocybe”, Latin for cone-like referring to its conical cap, and “tenera”, Latin(tener) for tender/delicate referring to its extremely fragile stalk.

The identification of this species purely on its macromorphological characteristics is almost impossible as, to put it plainly, they all look alike. Thus, accurate identification of Conocybe tenera requires microscopical analysis.

Cap: The cap of this species measures 1.0 to 3.5 cm in diameter. It is narrowly conic at first, becoming broadly bell-shaped, often with a flaring margin or an up-turned margin and limb. The surface of the cap is smooth, dry, and hygrophanous. When young the cap is orange-yellow, becoming brownish-orange and eventually fading to a yellowish-pink color.
Flesh: The flesh is thin and brown.
Gills: The gills of this species are subdistant to narrowly distant, ascending-adnate, and narrowly attached. Initially yellowish, the gills turn cinnamon or rust-brown as spores mature. Characteristically, the gill faces are visibly darker than the gill edges.
Stem:  The stem measures 4 to 8 cm in length and 1.5-3.0 mm in diameter. It is straight, cylindrical, and slightly enlarged at the base. The stem is hollow and characteristically fragile. It is colored similarly to the cap and has a streaked surface.
Spores: The spores measure 7-10 by 5.5-7µm in size. They are ellipsoidal, smooth, thick-walled, with a distinct broad germ pore.
Pleurocystidia: This species lacks a pleurocystidia.
Cheilocystidia: The cheilocystidia are scattered and capitate, meaning with small enlargements at the tip. These are said to resemble bowling pins (lecythiform).
Spore Print: The spore print is rust brown.
Smell: No distinctive smell.
Flavor and Edibility: Very little known is about the flavor or edibility of this species. For example, its cousin Conocybe filaris, also sometimes known as Pholiotina filaris, contains deadly toxins such as amatoxins and phallotoxins, but whether this species does too is unknown. As such, it cannot be recommended as an edible species and should be treated as potentially poisonous.
Habitat: Cropping up as solitary, scattered, or gregarious in grassy areas such as laws, pastures, gardens, parks, and along trails.
Fruiting Season: This species fruits during spring and summer, most commonly from May to July.
Range:  Conocybe tenera is ubiquitously distributed throughout the world and is found widely in North America.

Pick any other Conocybe species and you have got yourself a look-a-like. As previously mentioned, Conocybe tenera is a “type species” demonstrating typical macromorphological features for its genus leading to a number of similar-looking Conocybes (Conocybe lactea, Conocybe apala, etc) being confused for it. As such, the only accurate means of identification is through microscopic analysis.

Other possible species that may be confused for Conocybe tenera are mushrooms from the species of Galerina and Mycena.

Very little is known about the safety and toxicity of Conocybe tenera. However, it is recommended to avoid the consumption of this mushroom on the account of related Conocybe species containing deadly Amatoxins such as amanitin and amanin which can produce an Amatoxin syndrome. This syndrome occurs within twenty-four hours of mushroom consumption and manifests with symptoms and signs such as stomach cramps, vomiting, diarrhea, and dehydration leading to circulatory collapse manifested chiefly by low blood pressure and increased heart rate. This initial phase is followed by a period of apparent recovery during which insidious hepatic and renal failure start to develop. This “false recovery period” last approximately two to three days and is followed by complete hepatorenal failure. No antidote is available for amatoxin poisoning, and individuals poisoned with amatoxins are provided supportive and symptomatic treatment. [iv]