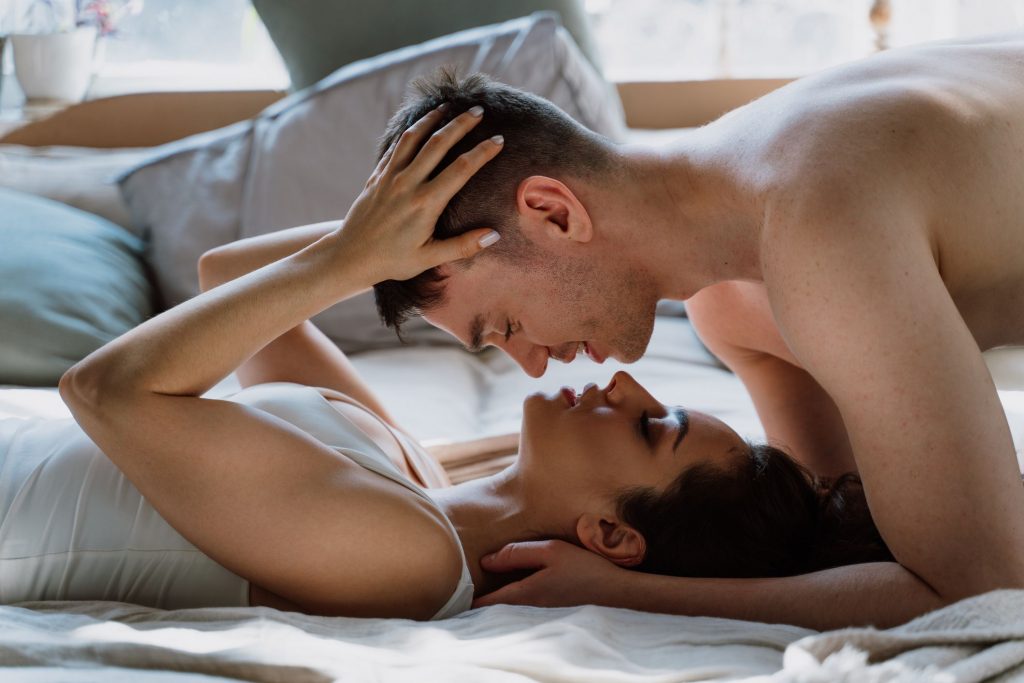 “Hey, wouldn’t it be amazing to have sex on shrooms?”

It’s the sort of thought that probably occurs to most psychonauts at least once. Some go on to try out the experience. But just as shrooms themselves aren’t always amazing, and sex by itself isn’t always amazing, the two together aren’t always the best thing. In fact, sex on shrooms can be pretty awful. It’s hard to tell ahead of time how it will work out, but there are things a person can do to increase their chance of having a good time[i][ii][iii].

Psilocybin is the primary psychoactive substance in most popular psychoactive mushroom species. It is known for altering the mood, thinking style, and perception of those who eat it, though exactly what that means depends largely on the dose and on the “set and setting,” that is, the mindset and surroundings, of the user.

It’s the changes in perception—that is, the hallucinations—that get the most attention from people who have never used psilocybin, to the point that this substance is often referred to simply as “a hallucinogen,” as if that were the only thing it does. Actually, at very low doses, psilocybin does not cause hallucinations at all, though it does alter the mind in other ways. Even at moderate doses, the hallucinations are likely to be fairly subtle; colors may look brighter, touch can feel wonderful, tree branches might take on a geometric appearance, walls might start breathing. But it’s only at really high doses that a person might start seeing things that just aren’t there at all.

“Changes in thinking style” can include important personal insights and new perspectives on life. It is this aspect that most strongly supports psilocybin’s use in therapy and in spiritual development.

The changes in mood often involve euphoria and a deep feeling of connection to others and to the universe in general—but the change could also mean intense anxiety. One way to understand the paradox is that psilocybin exaggerates whatever mood the user had going in to the trip. A scary trip isn’t necessarily a bad trip—some people are able to open themselves to and learn from even an anxiety-filled experience. It’s not uncommon for painful memories to surface during a trip, allowing processing and even resolution of old hurts, another way a shroom trip can be unpleasant and yet personally valuable.

So, yes, having sex with all your senses brightened and your heart open sounds amazing, but it’s also possible you’ll find your sexual encounter interrupted by an anxiety attack or by suddenly recalling a previously repressed memory of sexual abuse. The latter isn’t necessarily bad—it could be an important step in healing–but it’s probably not anybody’s idea of a party.

So the picture’s complicated.

Problems with Sex on Shrooms

There’s actually a whole long list of things that can go wrong with combining sex with shrooms—that doesn’t mean it shouldn’t ever be done, but anybody interested in trying the experience should be aware of the risks and prepared for them.

Most obviously, use or possession of psilocybin in any form is illegal in most jurisdictions, so any trip, with or without sex, risks a trip to prison. There are also health risks inherent to psilocybin use—serious side-effects are rare, psilocybin is a relatively safe drug, but problems are possible.

As to sex-specific issues, the most serious is the problem of consent. People who aren’t sober can’t meaningfully consent to sex—even if the sex is their idea. If they ask, you have a moral obligation to say no. The obvious solution is to discuss the possibility of sex before either of you takes mushrooms—get prior, sober consent. But mushroom trips take a long time. It might be several emotionally eventful hours before taking the mushroom and going to bed. Clearly, consent must be sought again to make sure they didn’t change their mind, but now your partner isn’t sober. Is sex on shrooms just never ethical? We’re going to leave that up to you and your partner to figure out, but it’s a serious question.

Then there is the problem of emotional preparedness. Sex on shrooms is likely to be emotionally intense. That could mean feeling deep love and undying devotion towards one another, or it could mean processing previously repressed trauma. Either could be bad news on a one-night stand with somebody you really don’t know or trust. Some people get very lucky and have great experiences with people they didn’t really know before—love-at-first-sight can indeed happen and lead to long-term happiness, and sometimes shroom-sex is involved. But if you don’t want to depend so much on luck, it’s best to not have sex on shrooms with anybody but a committed partner you already trust completely.

Finally, there is the problem that sex might not even be possible. While some people find tripping on shrooms an inherently erotic experience, that may or may not translate into actually being capable of, or physically interested in physical sex. Even if biological arousal is possible, and it isn’t always, the psychonaut might have too short an attention for real sex, or might be too distracted by the trip to focus on their partner. Or one or both partners might just end up not in the mood in one way or another. Of course, sometimes sex is extremely possible, just be aware that it’s not a sure thing.

Good Things About Sex on Shrooms

Most obviously? When everything works perfectly, sex on shrooms is amazing, both physically and emotionally. And even if the trip becomes unpleasant an uncomfortable, working through the experience together can bring couples closer together. Many people use psilocybin as a tool for deep personal development, and going through that process with a partner can be very rich and rewarding—such a partnership does not have to include sex, but it certainly can.

So, yes, there is a way to maximize your chance of having a good sexual experience while on shrooms. There are no guarantees, but there are no guarantees about sex while not on shrooms, either. You can’t go into it focused on trying to get the specific experience you envision. Instead, you have to be ready to respond to the situation and to your partner and let the situation be whatever it becomes (even if that means not having sex today).

Any psilocybin experience involves certain mental and physical risks, meaning you should take certain basic precautions to minimize those risks. We’ve written about those precautions in detail before, so we’re not going to repeat all of it here, but it includes paying attention to set and setting. That means making sure you’re in a good mental and emotional place going into the trip and creating a safe, secure, and enjoyable place to be. Also, there should be a sober person present in case of problems—of course, if you’re hoping to have sex, having a trip-sitter might be awkward, unless your trip-sitter is your partner. There’s no rule that you must both be on shrooms.

Using shrooms means getting vulnerable. Having sex also means getting vulnerable. Doing both together means getting super-vulnerable. That means it’s important to choose a partner who will be gentle and caring with your vulnerability, somebody you trust not to hurt you or neglect your needs—but getting hurt by your partner is not the only danger here. If all goes well, you’re going to have an experience of profound intimacy, and that will change your relationship. You could fall in love, if you’re not there already. Is this somebody you really want to be in love with?

Establishing consent for sex prior to taking shrooms—and possibly several hours before the sex will occur—doesn’t mean signing a waiver or a contract. For one thing, either of you might revoke consent later. It also doesn’t mean scheduling sex. It means talking about sex as a possibility and giving each other a green light. Sex might happen, if you both feel into it later on in the evening. Talking about sex while sober also means discussing issues such as birth control, disease prevention, boundaries, and emotional issues and concerns. What do each of you need to be safe? What challenges might come up? Such conversations absolutely must occur, but are difficult or impossible to have while other than sober.

Of course, if this is an established partnership, much of this discussion will have already happened simply as part of knowing each other as well as you do, but it’s still good to touch base.

With psilocybin, it’s always important to err on the side of taking too little rather than too much. That’s because the risk of bad reactions and serious side effects goes up the more you take. When sex might be involved, the principle of caution is even more important because even if a too-big dose doesn’t cause anything unpleasant to dangerous, it might make sex impossible or ill-advised.

Most people who want to have sex on shrooms will prefer a low to moderate dose—more and the trip could distract from, rather than enhance, the sex. Also, if you want to avoid the presence of a sober trip-sitter, then as a matter of safety, you need to keep the dose low. Finally, sex will make you and your partner more vulnerable in all sorts of ways, so if something goes wrong, it’s going to be worse. So you want to avoid anything going wrong.

The key is to know your limits—and to be sure your partner understands theirs. There are couples who can use high doses of shrooms to fuel a super-intense, super-raw sexual encounter, but they are people who already have a lot of non-sexual experience with high doses and really know what they’re doing. A challenging trip into unknown territory is not the time to have sex.

If are having trouble determining your dose, try our dosage calculator.

Most couples find that when in the trip the sex happens matters almost as much as the dose. Specifically, sex should happen, if it happens at all, after the peak, when the trip has started to mellow, and you are both through whatever spiritual crisis may have occurred and feeling emotionally open and clear.

Sex during the peak is something of an advanced move and may be too much for many psychonaut couples. At the beginning, while the trip is busy intensifying and mindsets are rapidly changing, it could be difficult to determine if sex is even a good idea.

It’s easy to fall into thinking that sex means just one thing—genital friction in pursuit of orgasm. But in the context of sex on shrooms (and, frankly, in other contexts) that’s not necessarily so. Kissing, or even just spending time together, can be just as intimate and satisfying as anything below the belt, especially while on shrooms—psilocybin is said by some to open up a person’s cosmic sexuality, a kind of erotic union with the universe that leaves genital contact kind of beside the point. Be open to the possibility that maybe on this particular trip you don’t need to have sex because you already are having sex, and literal coitus would ruin it.

Be here now, as they say.