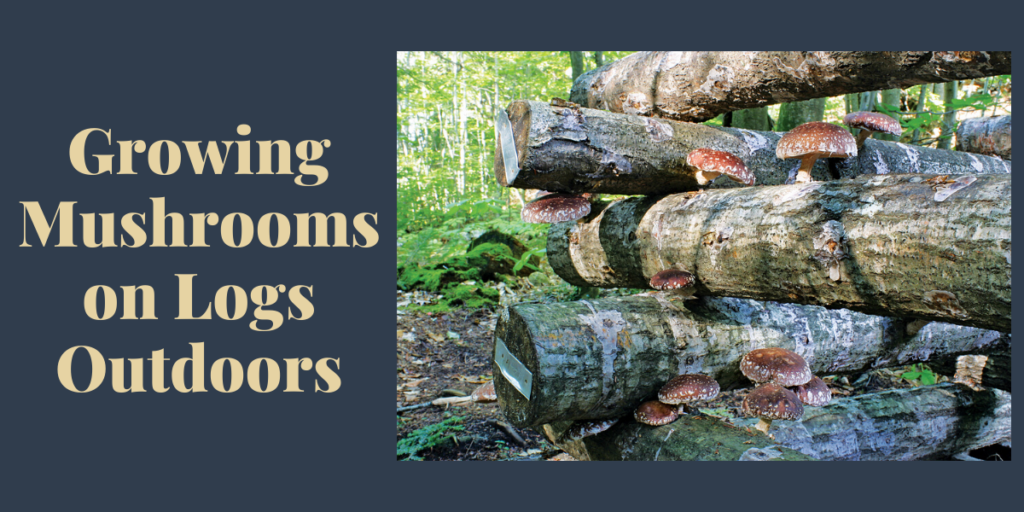 Mushroom cultivation doesn’t have to be a large-scale commercial project. It can also be a fun hobby, and hobbyist growers are among the few who have access to certain species that don’t keep or travel well.

Mushroom growing bears a superficial resemblance to gardening, but fungi are not plants and have very different needs. They don’t need (and usually don’t want) sunlight, but they do need food and water—fungi are more like animals, biochemically, than they are like plants. The substrate you grow your fungus  in is not just its home but also its food, meaning that what kind of material you grow your mushrooms in depends on what the species you want to grow likes to eat.

Some of the most popular edibles like to eat wood. These can be fed sawdust or even straw, but one of the simplest options is to give them the thing they evolved to eat—logs.

Why Grow Mushrooms on Logs?

Logs have several advantages for growing mushrooms, especially for people who own their own trees and may already have extra wood available from thinning or trimming[i].

A log is just a cut piece of a tree. It doesn’t need extensive processing, it doesn’t need any kind of container, and it doesn’t even need to be sterilized—as long as the log was cut from a living, healthy tree, its interior will be perfectly clean. Logs are also easy to manage and can be kept outside, rather than in a grow room. Alternatively, a small log makes a nice decorative item inside the home[ii], something that can’t be said of a plastic bag of inoculated sawdust.

What Types of Mushrooms Grow on Logs?

The mushrooms most commonly grown on logs[iii] include shitakes and the many different species of oysters (including some that are almost never available commercially). Reishis also grow on logs, not that they are edible, but they are a popular medicinal species. Other less well-known edible species happy to grow on logs include lion’s mane, chicken-of-the-woods, maitake (also called hen-of-the-woods), nameko, and pioppini.

White buttons, portabellos, and most “magic” mushrooms are not options, though. They don’t like wood.

What Types of Logs Can You Inoculate?

Most types of wood will feed some fungus somewhere, so the trick is to choose tree species that will support the kinds of mushrooms the grower wants. Most of the popular cultivated mushrooms will happily eat wood from most hardwood species, but they do have their favorites. Fungi that feed on hardwoods almost never eat conifers and vice versa—those that appear to like both are often actually two different look-alike species.

Reishi: oaks and plums, though there are closely-related species that can be cultivated on conifers.

Lion’s Mane: maples are best, but lion’s mane will grow on many other species, including walnut[iv]. Very few mushrooms can be cultivated on walnut.

Maitake: oaks, ideally[v]. Some growers partially bury the logs because maitake likes feeding on stumps near the ground.

How to Grow Mushrooms on Logs

While an article such as this one cannot provide detailed instructions for mushroom cultivation, but can provide an overview so beginners can get a sense of what growing mushrooms on logs might involve.

Logs[vii] need to be cut from healthy, live trees and then stored in a humid, shaded place for several weeks (but not more than a month). Cutting live, rather than using fallen, dead trees is important because dead wood, or the wood of living but diseased trees, may already be colonized by fungus. These “weed” fungi would compete with the crop for space and food, and would also produce their own mushrooms—which might not be edible. Live trees can fight off fungi, at least when healthy. But, for the same reason, living, healthy wood can’t be effectively colonized by most fungi. Letting the logs sit gives the wood time to die so that it can be colonized.

Many tree species are best cut in the winter, when the biochemistry of the trees is ideal for mushroom food. Trees cut in the spring during active, rapid growth, will lose their bark too fast and aren’t good for mushroom cultivation—the bark must stay on to keep the wood from drying out (keeping the logs shaded and in a humid area also prevents drying).

The logs need not be very big, and small-diameter logs are not only easier to handle but often have more sapwood (which many fungi prefer to eat) for their size. Four to six inches is an ideal diameter; the length should be whatever is convenient for the grower. Four feet is quite manageable, but a hobbyist who wants to keep a grow log inside an apartment might get good results from something only a foot or two long.

Some growers soak their logs in water over night prior to inoculation; soaking can’t save a dried-out log (logs don’t take on water easily, which is why wooden rafts can float for more than a few minutes) but can provide a little added moisture.

There are two different types of inoculants used with logs[viii], plug spawn and sawdust spawn–”spawn” in this context refers to samples of mycelium grown on a portable substrate growers can use as seed. Both hobbyist growers and large-scale mushroom farmers typically start with spawn rather than spores because spawn is genetically identical to the parent fungus it came from, making its performance close to guaranteed. A third type, grain spawn, is only for indoor set-ups using straw or other such substrates and is not used to inoculate logs.

Sawdust spawn is low-cost, reliable, and it lets the fungus colonize the log fast. Unfortunately, it also requires a specialized inoculation tool. Sawdust is a great option for large-scale mushroom growers, but for hobbyists who don’t want to invest in new equipment, plug spawn (literally dowels colonized by fungus) is a better option. To use it, just drill holes in the log (to find out how many holes to drill, multiply the length of the log in centimeters by its diameter in centimeters[ix]), tap a plug into each hole with a mallet, and then cover the hole with melted wax to seal out weeds.

For most types of mushroom, the best time to inoculate is in the spring, after the risk of frost has passed.

Some growers prefer to stack their logs in loose structures or lean them on frames in order to provide good air flow. Others prefer to partially bury their logs. A hobbyist with a single, small log could stand it on end in a tray in the middle of the dining room table as a centerpiece. In general, inoculated logs should be kept somewhere shady and humid. A long, soaking rain once or twice per week will help keep the wood moist—use a sprinkler if the weather does not cooperate.

Once a log is entirely colonized (the sapwood visible on the cut ends will be visibly whitened) the fungus can be prompted to fruit by soaking the log in cold water for 24 hours, since many species like to fruit after a heavy rain. Or, it’s possible to simply wait for the fungus to fruit in its own time.

The fungus won’t fruit until it has colonized the entire log. How long that takes depends on both the species of fungus and the size of the log, but most logs need at least six to nine months after inoculation before the first flush. A log can then flush once or twice per year for several years—the size of the harvest and how long a log can keep flushing depends on the mushroom species. An exhausted grow log can often be made to fruit again by breaking it up—and pieces of exhausted log can be used to inoculate grow beds of wood chips.

In theory, if a grower orders spawn for a given species and properly inoculates logs with it, any mushrooms that grow from the log should belong to that species. In practice, however, other, wild fungi species can colonize the same log—and could be poisonous. Growers must therefore know how to identify mushrooms just as foragers must, in order to avoid harvesting weeds by mistake.

Unlike weed plants in a garden, unexpected mushrooms in a grow log can’t be weeded out—the fungus will continue to grow through the log. Growers who want to avoid weeds must simply discard logs that become contaminated.

A perhaps less dramatic problem than toxic weeds is grower confusion; cultivating mushrooms is a learning experience that often involves a little trial and error, but growers who forget what they have tried will not be able to avoid repeating errors. The smart thing to do is to write down the species of mushroom, the species of logs, the dates of inoculation and harvest, the size of the harvest, and anything else that might be helpful when starting the next grow log.

[iii] How to Grow Mushrooms on Logs: The Ultimate Guide.

[ix] How to Grow Mushrooms on Logs: The Ultimate Guide.