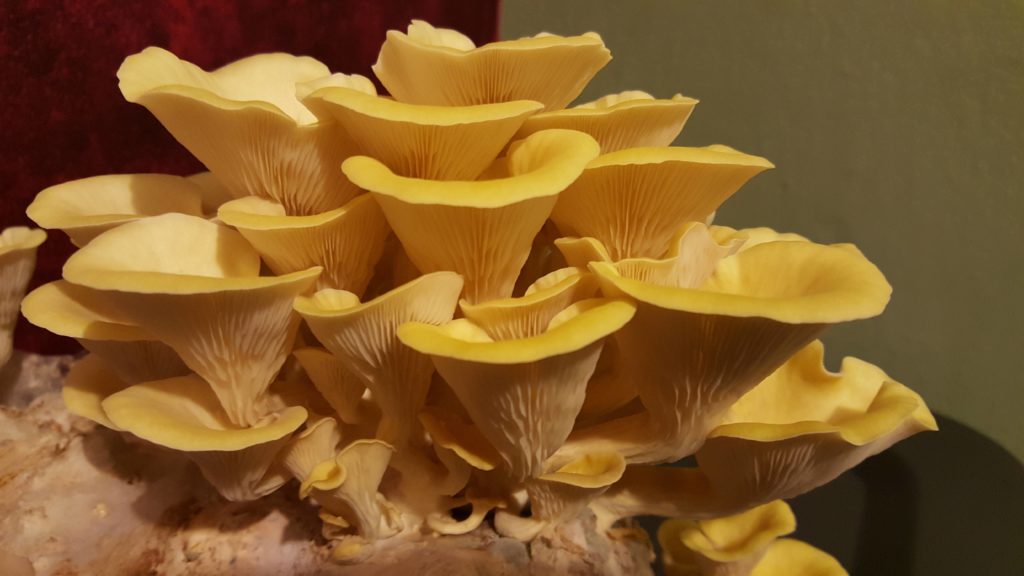 The golden oyster mushroom[i], also called the yellow oyster or, in Japanese, tamgitake, is an Asian species popular with hobbyist growers for the gorgeous yellow color of the caps and the versatile, cashew-like flavor. It is also relatively easy to grow, can produce huge crops, and will accept many different substrate types. Unfortunately, golden oyster is almost never available fresh commercially, because its shelf-life is so short and the mushrooms break very easily.

Golden oysters are not well-known as medicinal mushrooms, however as members of the Pleurotus genus they have many of the same potential medicinal applications as other oysters. The species is also showing potential in mycoremediation—that is, growing fungus in contaminated materials in order to biologically process and clean up the contamination.

Golden oysters typically grow in dense clumps. They resemble other oyster species, except for the color and the fact that their stems (or stipes) are often a little larger and more centrally positioned than most. The celebrated cashew-like taste only develops with cooking; raw, the mushrooms are quite bitter. Golden oysters fruit through the fall and winter in the wild, though growers can get a good flush any time of year.

Habitat: warm climates, feeds on hardwoods such as oak, beech, and elm

Discussing the health benefits of golden oysters is complicated by the fact that few authors differentiate among the various oyster mushroom species. While oysters as a group do show a certain biochemical family resemblance and thus share many of the same potential health benefits, they are not identical and certainly not interchangeable. A general discussion of oyster mushroom benefits follows, with the caveat that golden oyster may differ in certain ways. Where information on the golden oyster specifically is available, it is included.

Oyster mushrooms in general are nutritious, healthy food, and many have been used in traditional folk medicine for a variety of complaints, including immune issues[ii]. Preliminary research suggests some oyster mushroom species may indeed be sources of medicinal compounds[iii].

Mushrooms are seldom a major source of nutrition in the diet, partly because the fungi are seldom used as the bulk of a meal (more usually they’re added sparingly for extra flavor)–and yet they would have to be eaten in bulk because of the high water content. But mushrooms are low-fat, low-cholesterol, and have a lot of both protein[iv] and fiber, as well as certain minerals and vitamins[v]. Golden oysters specifically have more protein than some of the others, appear to be powerful antioxidants[vi], and they are good sources of potassium, vitamin B2, vitamin B3, and vitamin B5[vii].

So golden oyster mushrooms, like most edible fungi, are a good way to add a lot of flavor and texture without adding a lot of calories, and while their overall contribution to a person’s diet is likely to be minimal, it will be a positive contribution.

Rats were fed a high-fat diet, and some were also fed a variety of golden oyster products; those who received the mushroom supplement had lower cholesterol, lower triglyceride levels, and other markers of better health[viii]. The study also identified the chemical constituents responsible for the beneficial effect. A separate study found that mice deliberately made obese by being fed an unhealthy diet, improved when given a golden oyster extract[ix]. The mice treated with the extract gained less weight and less body fat and ate less. They also had lower levels of triglycerides and cholesterol, and had other markers of better health. Interestingly, their glucose tolerance also improved.

A research team extracted a substance from golden oyster fruiting bodies and found that it slowed the reproduction of human leukemia cells[x]. The study was strictly in vitro. The team also studied the chemical structure of the substance and determined that it is a glycoprotein but not a lectin, and also determined the means by which it interferes with cancer cells. Whether eating the whole mushroom could have an anti-cancer effect was not addressed.

Another study showed that a water extract of the mushroom is able to significantly shrink tumors and reduce inflammation in mice[xi].

A research team isolated another substance, a glucosylceramide, from golden oyster, which was found effective against two potentially disease-causing bacteria types[xii]. The team also identified the chemical structure of the substance and several of its other properties, as well as analyzing extracts of the mushroom for other effects. The study was entirely in vitro and did not address whether eating the mushroom could have an antibiotic effect.

Two groups of hairless mice were given a diet known to induce atopic dermatitis in mice. One group was also given an extract of golden oyster. The mice who received golden oyster had much less severe symptoms of dermatitis[xiii]. Another study looked at the properties of a number of extracts and concluded that the mushroom has the potential for successful use in skin care products and cosmetics[xiv].

Several studies[xv][xvi] have investigated the anti-inflammatory qualities of the golden oyster. Most of these studies have been purely in vitro, aimed more at understanding the chemistry of mushroom-derived substances, rather than at developing treatments per se. Because “inflammation” plays a role in many different disease processes, not just the familiar swellings from athletic-type injuries, anti-inflammatory substances are very valuable—they could have a role in the treatment of cancers, asthma, autoimmune diseases, and more. It is not yet clear whether eating golden mushroom itself could have a therapeutic, anti-inflammatory effect, but extracts derived from the mushroom have potential.

The Pleurotus genus includes many species, and all of them are referred to as oyster mushrooms. Based on the available research on many of these species, oysters in general appear to have significant potential for medicinal uses, though few treatments have actually been developed yet[xvii]. Closely-related species can be biochemically quite different, but the fact that so many oyster species show some degree of effectiveness in the same several areas does suggest possibilities for the golden oyster. By the same token, where research suggests golden oyster does have a certain benefit, similar results for other oyster species offer tentative confirmation.

Pleurotus mushrooms may also be able to encourage beneficial microorganism growth in yogurt and other fermented dairy products, and while at the same time inhibiting colonization by potentially disease-causing microorganisms. Oyster mushroom extracts also have been used as ingredients in cosmetics.

Golden oyster extracts and products are sometimes sold for a variety of uses, but since these have not been through human clinical testing, it is difficult to say how much or how little might be effective. It’s also not clear whether any of these substances might have possible dangers associated with over-ingestion—it is not unusual for substances that occur naturally in food to become dangerous when concentrated. When in doubt, follow the guidance of experienced practitioners.

Golden oyster mushroom itself is generally considered a safe food, although there are people who have reported adverse effects from some oyster mushroom species, and at least some species of oyster mushroom do contain a substance shown to be toxic in animals[xviii].

There is not a lot of information out there on golden oyster specifically, but most people can eat cooked oyster mushrooms of whatever species freely without difficulty. Some people do report allergy symptoms, either to eating the mushroom or to inhaling its spores (not a problem for consumers, but can be an issue for hobbyist growers). Others appear to be sensitive to small quantities of toxin in at least some oyster mushroom species. It is best, when trying a new oyster mushroom species (or, to be entirely safe, any food) for the first time to exercise moderation. One doesn’t want to discover a new allergy or sensitivity by gorging on something!

Some people claim to be able to eat raw oyster mushrooms without difficulty, others advise against the practice. There are certainly some otherwise edible mushrooms that are toxic when raw, and many mushrooms are difficult to digest in their raw state. However, in the case of golden oyster mushrooms, the question may be somewhat academic, as they reportedly don’t taste very good unless they are cooked.