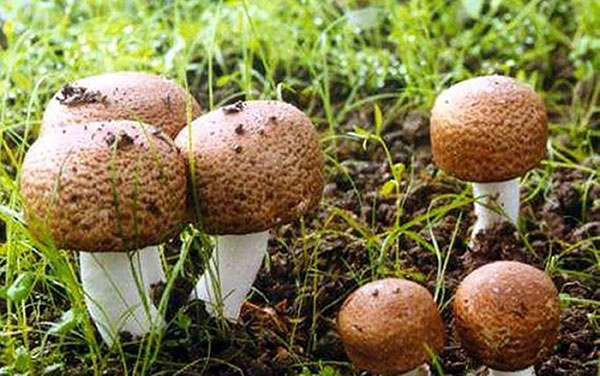 Agaricus blazei Murill (subrufescens) is a member of the basidiomycete’s family. This edible mushroom originates from a small coastal village called Piedade near Sao Paulo in Brazil [1.]

Agaricus blazei is also known by a number of other names including ‘Cogumelo do Sol’ in Brazil, ‘Himematsutake’ in Japan, (Reviewed in [2.]), God’s mushroom, Mushroom of the sun, Almond mushroom or Princess [3.] Although, the natural habitat of this mushroom is Brazil, it has been commercially cultivated for the food market in Brazil, China and Japan. Great care is taken to reproduce the conditions of its native habitat [4.] thereby preserving its natural nutritional and therapeutic properties.

Cap: Hemispheric becoming more convex; a diameter of 5 -18 cm; color ranges from white to a red-brown with a texture of silky-fibrillose developing into small overlapping scales.

Stem: 6 – 15 cm long; diameter of 1 – 1.5 cm at the top and more bulbous below; formed from tufted fibers – becoming scalier closer to the base.

Smell: Scent of almonds when crushed.

Spore color: Purple-brown under the microscope

The nutritional value and reported medical properties of Agaricus blazei underpin its use for medicinal purposes to aid a wide range of disease conditions from chronic hepatitis to cancer. Of particularly importance is the growing evidence supporting the Agaricus blazei’s anti-tumorigenic and immunological properties [5.] Medicinal use usually follows extraction of components from the fruiting body of the mushroom [6.] This juice is of particularly interest due to legendary suggestions that the elderly population, local to the region where it is was identified, were less likely to be affected by serious illnesses, potentially due to incorporation of this mushroom into their diet [7.] Its spores were taken to Japan in the mid 1960s and since then its biomedical properties having been extensively scientifically researched [8.]

The fruiting body of Ab is polysaccharide-rich especially in β-glucans, a component that has been shown to have a strong modulating effect on stimulation of the innate immune system and is widely found in natural food [11.] Other research suggests that the β-glucans may not be the only method of immune modulation by Agaricus blazei. This follows investigations on an extract from the mycelium of the Agaricus blazei, low in polysaccharides in comparison to the fruiting body of the mushroom. The extract along with components from two other mushrooms also showed anti-tumorigenic properties [12.] indicating there may be benefits to Agaricus blazei than is currently understood and further research continues into the growing benefits of dietary supplementation with this mushroom extract.

An exciting area of research has been in the field of cancer. Substantial evidence has been provided for the anti-tumor activity of Agaricus blazei in mouse models of cancer including fibrosarcoma, lung, prostate, ovarian and myeloma [7.] Cell proliferation is routinely performed throughout the body as our cells undergo normal turnover. Cancer cells arise from normal cells that undergo transformation and/or unregulated cell proliferation. Recently using in vitro cell culture systems, the hot water extraction of Agaricus blazei components was administered to human pancreatic cell lines, pancreatic cancer is an aggressive form of malignancy. The administration of Agaricus blazei extract resulted in cell cycle arrest (prevention of proliferation) and led to programmed cell death mechanisms – apoptosis [15.] This is of important concern when considering the uncontrolled cell proliferation that occurs in cancerous growths. It is thought that proteoglycans and ergosterol are two of the compounds naturally occurring in the Agaricus blazei that are considered to be anti-tumorigenic [16.] Whilst there are benefits for taking Agaricus blazei it is not a replacement for the traditional treatment of cancer and it is important to seek and adhere to medical advice.

Immunoglobulin E (IgE) is an antibody released in response to allergic responses and is also associated with hypersensitivity such as seen in asthma. In asthma mouse models administered Agaricus blazei led to amelioration of the immune response [17.] and these effects have since been observed in humans with allergy and asthma responses being reduced during the pollen season [6.]. The response is thought to be due to the balance between the T Cells of immune system of which the TH1 and Th2 populations are essential to immunity; however, a critical balance is required. TH1 are associated with a more pro-inflammatory response and TH2 promotes IgE release and also has anti-inflammatory effects [18.] In order to prevent hypersensitivity as seen in allergic reactions, a focused balance of TH1 moderating the TH2 response is essential. Agaricus blazei appears to act not only to prevent infections but also in an immunomodulatory manner dampening down, potentially, an over-sensitive immune response.

It is well established that aging and disease initiation and progression can result from environmental oxidative stress. Hydrogen peroxide can cause oxidative damage DNA damage by the production of free radicals leading to genotoxic effects; such DNA modification may impact on the immune response to inflammatory disease and also cancer. Recently, novel research has shown a potential role for intervention by Agaricus blazei for damage caused to human blood cells in vitro by hydrogen peroxide [19.] Whilst this is an exciting new area, interpretation of the results should be made with caution due to the low number of patients used in the study. It is an interesting area to be pursued in relation to the beneficial properties of Agaricus blazei and its potential for protection our genetic material against environmental insults.

A very interesting study also recently looked at the effects of Agaricus blazei on neuroblastoma cells – human derived dopaminergic neurons. The model was specifically looking at Parkinson’s disease, a neurodegenerative condition that sees loss of dopaminergic neurons in the substantia nigra of the human brain. The group were observing the effects of Agaricus blazei on the mitochondria in the cell (mitochondria are power houses essential for life). In the presence of Agaricus blazei, cell viability was increased and reactive oxygen species reduced in response to rotenone-induced toxicity (rotenone is a well-used model to replicate Parkinson’s disease models) [20.] Mitochondrial dysfunction is present in many neurodegenerative conditions, including Alzheimer’s disease as a result of cellular toxicity. Pre-treatment of the neurons with Agaricus blazei was shown to improve the viability of the cells and reduce rotenone-associated reactive oxygen species and programmed cell death under toxic conditions; thereby Agaricus blazei appears to have pro-survival effects in controlled in vitro conditions effective via mitochondrial pathways.

Presently the dosage of Agaricus blazei is unconfirmed. Although extensive research has been undertaken the dosage in not consistent between studies and has been performed under varying experimental conditions. Interestingly, one study on cancer survivors used a daily dosage of either 1.8g, 3.6g, or 5.4 g of Agaricus blazei granulated powder, daily for 6 months as a dietary supplement. They monitored side effects and concluded that those effects observed were not dose related. The side-effects seen included nausea, diarrhea, digestive discomfort and in one patient of the study a liver-related dysfunction occurred as a result of an allergic reaction to the drug [21.] Of interest, constipation symptoms were eased, potentially due to the high fiber content of the Agaricus blazei supplement; this may contribute to the diarrhea observed in some patients.

Toxicity tests performed in a study with mice have presented no apparent pathological alterations with the exception of an elevation in liver enzymes aspartate aminotransferase (AST) and alanine aminotransferase (ALT) in female mice at medium-high dosage [22.]