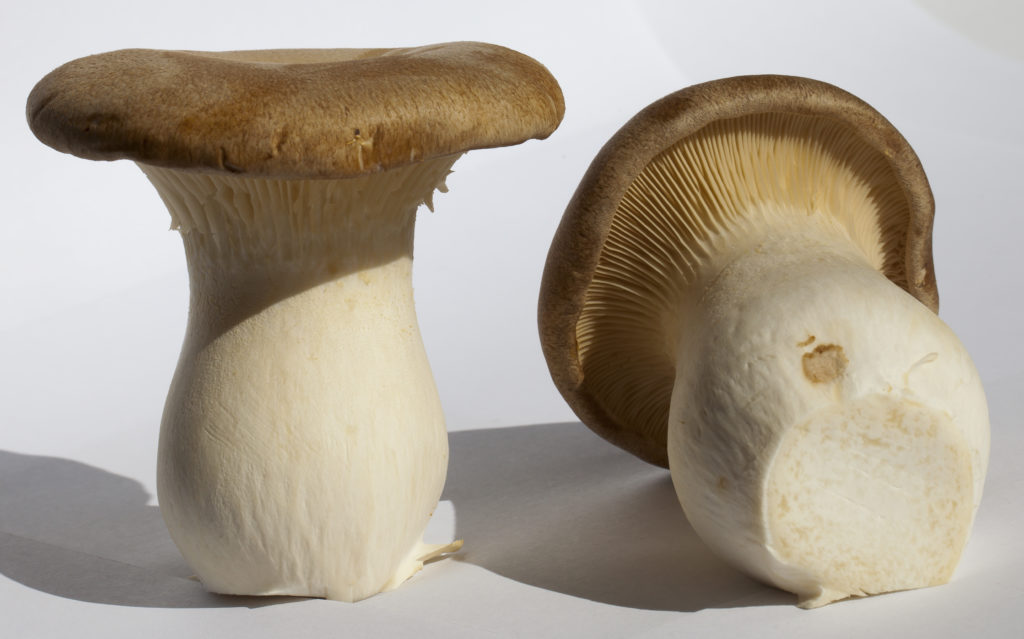 Pleurotus eryngii is a large, edible mushroom native to Europe and Asia[i]. While it is rare in the wild, it is cultivated world-wide and popular for its buttery flavor and eggplant-like texture, especially in certain Asian cuisines. The species has many common names, including king oyster mushroom, French horn mushroom, king trumpet mushroom and trumpet royale—using the scientific name helps avoid confusion. The name “king oyster” does hint at its close genetic relationship to the popular, and also edible, oyster mushrooms (including Pleurotus ostreatus), a group of species native to North America, but the king does not look much like its relatives. P. eryngii has a thick, vertical, white stem (or “stipe”) and a relatively small tan or gray cap, rather than the big white cap and all-but-absent horizontal stipe familiar to American mushroom hunters.

An anti-inflammatory protein found in P. eryngii called PEP has been shown to reduce the proliferation of colon cancer cells in both cultures of human tissue and in living mice, without damaging normal cells[iv]. In a separate study, a polyphenol-rich extract from the same mushroom species was shown to also combine anti-inflammatory properties with the ability to kill colon cancer cells without harming normal cells[v]. In both cases, the effect is dose-dependent, meaning higher doses have a stronger effect. Both substances have at least some potential in the treatment of both colon cancer and inflammatory bowel disease (IBD).

“Cancer” is not a single disease but, rather, a large group of maladies; all involve uncontrolled and disruptive cell growth, but have different patterns of disease progression and different causes and risk factors, and require different treatments. It is incorrect to say that a substance can “cure cancer,” as a blanket statement, simply because it proves helpful against one or more diseases. That being said, substances extracted from P. eryngii have shown promise against multiple cancers in both cell cultures and animal models, including cancers of the liver and lungs[vi] and breast[vii].

Although the mushroom as a whole has not been tested as a cancer treatment, it’s worth noting that multiple substances derived from this species are being investigated—suggesting that study of the whole mushroom could be interesting.

One study looked at the ability of several different types of fungus, including P. eryngii, to attack certain strains of influenza virus and herpes virus; P. eryngii was not the most powerful of those tested, but it does have potential as an antiviral agent[viii]. The study used mycelium (net-like or thread-like fungal tissue), not mushroom, but it was whole tissue, not a single-substance extract.

A whole-tissue extract of P. eryngii was tested against multiple types of bacteria and yeast that had been grown in Petri dishes; the extract killed some of the microorganisms but not others, showing limited, but real, potential as an antimicrobial agent[ix].

Many reputedly medicinal mushrooms contain β-glucans, a group of related polysaccharides that show both anti-tumor and immune-supportive activity. One study compared hot-water extracts from multiple mushroom species in order to estimate which would be a better source of β-glucans when cooked and eaten; P. eryngii proved the best of those tested[x]. The same study also showed that cultured cells treated with the extract showed changes consistent with greater immune and anti-tumor activity. Another study showed an additional group of immune-related changes in cultured cells treated with β-glucan derived from P. erygii.

Other studies give less direct evidence of P. eryngii’s potential for immune support.

One study tested the use of spent mushroom substrate from P. eryngii cultivation as a component in feed for elk[xiii]. That is, the plant matter on which mushrooms had been grown, together with remaining mycelium, was added to the diets of several captive bull elk, but not to the diets of similar control animals. The researchers hoped to find an additional use for the spent substrate, which presents a major disposal problem in mushroom-growing areas. The substrate proved successful as elk feed, and the test elk showed improvements in several markers of health—they also had higher testosterone levels than the control animals.

Another study tested the use of several substances isolated from P. eryngii as a treatment for certain estrogen-dependent breast cancers[xiv]. Reducing estrogen levels is an accepted treatment for some types of breast cancers, but researchers want to find a new way of controlling estrogen that has fewer side effects. Some of the P. eryngii compounds successfully inhibited the action of aromatase, an enzyme that converts androgens (including testosterone) into estrogens. While the focus of the study was on the reduction of estrogen, that there would be a corresponding increase in testosterone levels seems reasonable. The study involved chemical samples, not human subjects.

The reduction of fats, such as cholesterol, in the blood

Rats bred to have high cholesterol were given powdered P. eryngii in their diet to test the mushroom as a possible treatment for high cholesterol and obesity[xv]. The rats receiving the mushroom showed significant decreases in cholesterol and an improvement in the ratio of “good” to “bad” cholesterol, as well as a reduction in total body weight. Apart from being killed by researchers at the end of the study, the animals were healthy. Other studies, both in rats and in cultured cells, showed similar results[xvi].

High-cholesterol rats were also used in a study of P. eryngii as a possible treatment for diabetes[xvii]. Diabetes was artificially induced in the test subjects. While the mushroom-fed animals did not show a significant decrease in total cholesterol, their ratios of “good” to “bad” cholesterol improved, their body weight dropped, and, more to the point, their blood glucose levels dropped significantly. The mushroom did not cure the rats, but does show promise as a way to help control diabetes in concert with other treatments.

Not all health benefits involve taking medicine. A serious problem in agriculture is the contamination of corn and, to a lesser extent, other crops, with fungus that produces aflatoxin B1, a dangerous poison. The contaminated corn must usually be discarded, a great waste. However, one study[xviii] shows that P. eryngii can not only grow in the contaminated corn, it can also break down the toxin. The resulting mushrooms are entirely safe to eat, and after one month of growth, the corn-based growth medium also no longer contains toxins and could be safely used for something else.

Since P. eryngii as a medicine has not yet been tested extensively in humans, dosage must depend on the educated guesses of practitioners.

Pleurotus eryngii Side Effects and Toxicity

Since the mushroom is generally regarded as safe to eat freely, over-dose of whole-mushroom tissue is not likely to be a problem. For some foods, concentrated extracts can be dangerous even when the food itself is not, but there are no generally recognized warnings for P. eryngii products thus far. Indeed, many studies have been based on the hope that the mushroom could offer alternative treatments that are safer and have fewer side effects than current standard-of-care medications. Individuals can always have allergies or sensitivities that the general population does not, however, and it is also possible that dangers exist that have not yet been discovered. P. eryngii cannot be guaranteed safe in all possible circumstances for everybody.

While no warnings come up in internet searches, the potential of P. eryngii to alter androgen/estrogen ratios suggests possible reason to pause. Particularly, if the mushroom functions as an effective testosterone booster in humans, then possibly women might wish to be careful about taking it. However, any such problem is likely to be fairly subtle, or limited to people taking extracts, or the mushroom would not be as popular as it is for culinary use. As always, it is best to put such questions to the judgment of health care practitioners.

Perhaps the most significant warning is that P. eryngii has not yet been widely tested for its medicinal value in humans. While the combination of traditional use, animal studies, and in-vitro studies certainly suggests this fungus is useful, there is a lot we don’t know about how it works in the human body. That is not an argument against using it, but a certain caution in the face of uncertainty is still in order.