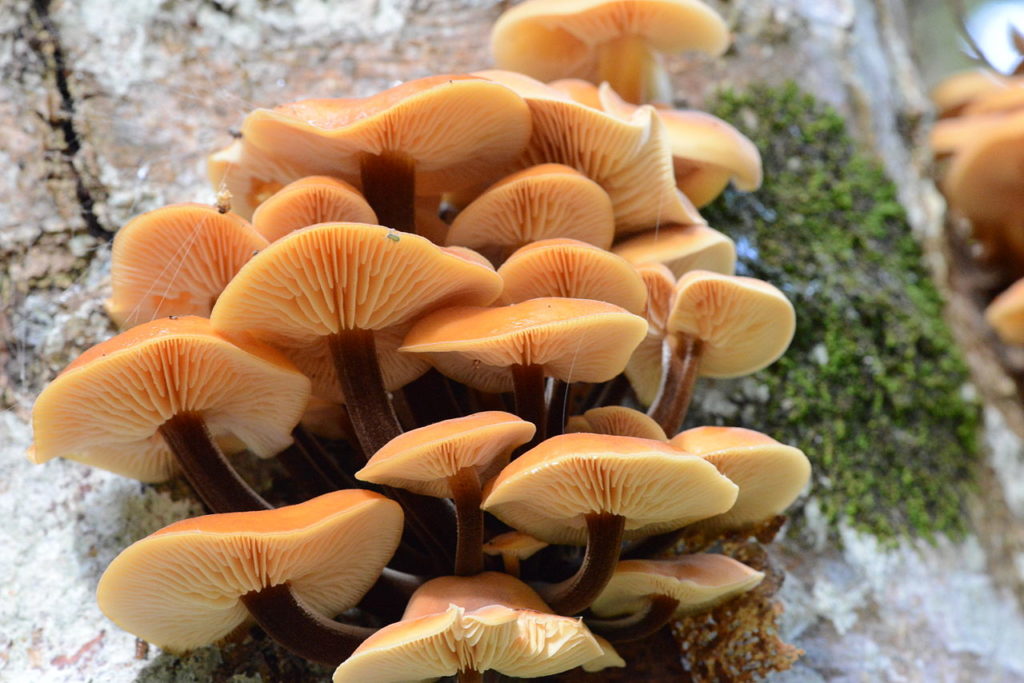 “Enokitake” refers to an edible fungus that not only has more than one name, it also has more than one appearance[i]. In Japanese, it is referred to as enokitake or enoki (“enoki” being the name of one of the plants the fungus grows on) and both names are used by English speakers, too. This exotic mushroom has other names as well including velvet stem, velvet foot, golden needle, and winter mushroom. The scientific name is Flammulina velutipes, though some older books list it under as Collybia velutipes because of a superficial resemblance to an apparently unrelated group of mushrooms. There are other previously-used scientific names as well.

By any name, enokitake is prized for its taste, the availability of the wild form in winter (when few other fungi fruit), and for a range of medicinal benefits; enokitake is reputed to help with everything from cancer to dementia to gastric ulcers[ii]. Research suggests that many of the benefits attributed to this mushroom are real[iii].

Enokitake[iv] grows wild in Eastern Asia, Western Europe, and much of North America. The fungus makes a living by eating the dead wood of various hardwood species—sometimes the wood in question is either part of a living tree or underground, however, so the fruiting bodies are not limited to obvious stumps.

The fruiting bodies have the classic shape of most gilled mushrooms, with a central, vertical stalk or “stipe.” Color and shape differ radically depending on whether the mushroom was wild-grown or cultivated, because growers rear the fungus in jars or bags away from light. The result is long, thin fruiting bodies in tight clustered that are sold undivided. The flavor is mild and the texture somewhat crunchy.

Persons gathering these mushrooms wild must take care, as an extremely poisonous mushroom not only closely resembles enokitake, but also sometimes literally grows on the same substrates; fruiting bodies of the two can occur in the same clump. The most obvious difference between the two is that enokitake has white spores and gills whereas Deadly Galerina has brown—although young galerina fruiting bodies may have white gills as well.

Enokitake is reputed to treat a range of ailments:

Enokitake also has an impressive nutritional profile[v], largely notable for what it doesn’t have; it is cholesterol free, fat free, low sodium, and low carbohydrate. It is a good source of niacin (a form of vitamin B3), and contains smaller but significant amounts of vitamins B5 and B1, phosphorus, and dietary fiber. Other nutrients, including protein, are present, but since mushrooms have a very high water content, deriving a significant portion of one’s daily protein requirement from enokitake would require eating a huge volume of mushroom.

A group of epidemiological studies in Japan[vi] showed that mortality from cancer is dramatically lower among people who grow enokitake mushrooms—people who also eat a lot more enokitake than the general population, since they can get damaged, unsalable product for free. Subsequent research has isolated a number of compounds within the mushroom that have cancer-fighting potential[vii]:

Enokitaki is also one of three mushroom species the water-based extracts of which are effective against multiple types of breast cancer cells, including estrogen-independent breast cancer[viii]. The study was conducted using cultured cells, not human participants.

Several substances found in enokitake have antimicrobial properties similar to that of some forms of penicillin in in vitro studies; however, the amounts of these substances can vary widely depending on the age and genetics of the mushroom[ix].

In one study, enokitake powder and enokitake water extract were given to hamsters on a high-fat diet; the mushroom significantly lowered the amount of cholesterol in the blood, apparently due to the presence of dietary fiber and other substances[x].

Other studies have revealed further potential uses of enokitake[xi].

Several substances found in the mushroom, or produced by fermenting the mushroom, show promise in preventing vascular disease or its symptoms.

Substances already used to treat certain aspects of hypertension have been found in enokitake, supporting both traditional uses and the studies showing its ability to lower cholesterol.

Rats with chemically-induced learning and memory problems showed improvement after being treated with polysaccharides derived from enokitake; the mechanisms involved suggested these polysaccharides could be useful in treating Alzheimer’s disease.

Ribosome inactivating proteins are a group of substances known to combat tumors and support the immune system, including fighting the HIV virus, among other effects. Some proteins in this group have been found in enokitake mushrooms. That is not the same thing as proof that enokitake can fight HIV, as that would require a very different type of study, but that is a possibility.

The anti-oxidant and immunomodulary properties of a number of substances found in enokitake have been studied extensively by biochemists, but generally not tested as potential treatments of anything—yet..

A number of studies have shown some substances within enokitake have potential for preventing liver damage.

All of the above studies, however, are aimed at someday using enokitake as a source of pharmaceutical compounds. They do not shed much light on how eating the mushrooms might improve health.

Enokitake is a culinary mushroom that is eaten freely. Over-dose of the mushroom itself is not generally a concern. As to how much mushroom should be used to achieve certain results, current research does not provide unambiguous guidance. Indeed, since most research has not involved testing in animal models, let alone humans, science is a long way from being certain how the mushroom might work as a medicine. For those wishing to explore enokitake’s potential themselves, it is best to rely on the judgment of a qualified healthcare provider for guidance.

Enokitake Side Effects and Toxicity

Raw enokitake contains flammutoxin, which, as the name implies, is toxic[xii]. Whether it is possible to receive an unhealthy dose of flammutoxin by eating the mushroom seems unclear, however. Some writers of the subject point out that cooking destroys flammutoxin, and that those who wish to play it safe can simply limit their consumption of raw enokitake[xiii].

Some bloggers recommend that pregnant women not eat enokitake because of the possibility of bacterial contamination. Actually, such warnings appear to refer only to a single voluntary recall by a single mushroom grower some years ago after a routine health inspection; no one was actually sickened[xiv]. Enokitake appears no more likely to carry dangerous bacteria than any other food, and less likely than some.

There are no other extant warnings, and indeed the mushroom is being investigated as a safer alternative to some existing medicines. While it is always possible for individuals to develop intolerances or allergies, enokitake appears generally safe.

One caution, however, is that the chemical constituents of the mushroom can vary dramatically depending on age, genetics, and type of processing (if any). It is possible, therefore, that not all enokitake products share the same medical usefulness.