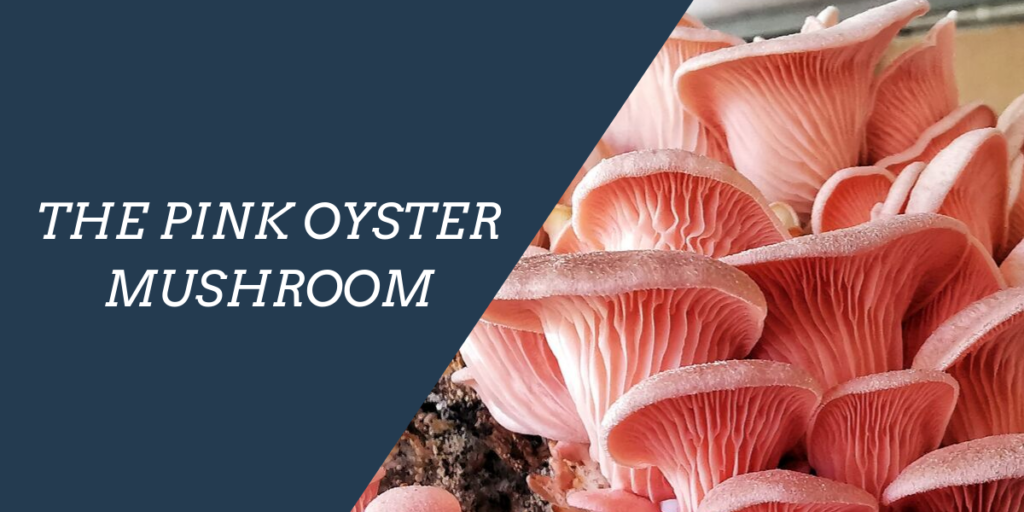 The pink oyster mushroom, a naturally-occurring variety of the normally white Pleurotus djamor, closely resembles most other oyster mushroom species, except for the bright pink color, which unfortunately fades with cooking. The taste is also broadly similar to that of other oysters. The Pink Oyster grows quickly and due to this it is resistant to contamination by molds. It fruits heavily, which makes it a favorite with hobbyist growers. The color makes it popular wherever it is sold. Unfortunately, pink oysters have a very short shelf-life, so they are not sold in very many places.

Besides the taste and lovely color, pink oyster mushrooms are a healthy food and may convey certain other health benefits, a possibility supported by modern research.

Like most other oyster mushrooms, the pink oyster is a thin, soft, shelf-like shape, with a short, asymmetrical stem or stipe. The bright pink color generally fades to whitish as the fruiting body ages. Curiously, though the mycelium starts out white, as most fungi do, it quickly turns pink. The spores, which can be numerous, can also be pink. This species is tropical and does not grow wild in cold climates.

Few authors differentiate among the various oyster mushrooms when discussing health benefits, which on the one hand makes it difficult to research pink oyster mushrooms specifically, but on the other hand does suggest that all the oysters have similar benefits. These benefits include an impressive nutritional profile and traditional use in folk medicine for various issues, including immune problems[i]. At least preliminary research supports the usefulness of oyster mushrooms as potential sources of medicine[ii], and some studies do address pink oysters specifically.

Mushrooms tend not to be staple foods, in part because they contain a lot of water, meaning it’s necessary to eat very large quantities to get much in the way of nutrition—but what nutrition oyster mushrooms do have is of high quality. They are low-fat, have no cholesterol (only animal-based foods ever have any cholesterol), and are high in both protein and fiber, as well as a number of vitamins, most notably riboflavin and niacin[iii].

Many people also appreciate oyster mushrooms as a way to pack a lot of flavor and texture into a meal without adding a lot of calories, meaning the very quality that makes the mushrooms a poor staple makes them a very healthy luxury food.

Multiple studies have assessed the biochemistry of the pink mushroom specifically (and/or its white variant) and found many substances known to have medicinal value. One study, for example, specifically assessed the anti-oxidant effect of an extract of the mushroom, and found that it is indeed strong enough that eating the mushroom likely has related health benefits[iv]. These were, however, strictly in vitro studies, not tests of actual treatments either in humans or in animal models.

The Pink oyster mushroom was one of the species assessed for antibiotic activity against several species of disease-causing bacteria; although the pink oyster was not the most potent in the study, the differences were minimal, and the pink oyster extract was effective against the bacteria[v]. Again, this was an in vitro study.

One study looked at methods of extracting a specific substance thought to have anti-tumor properties from pink mushroom oysters—and then used the substance to experimentally treat sarcoma in mice[vi]. The mice were divided into two groups, both of which were deliberately given cancer by injection with cancerous cells. One group was given the experimental treatment and the other was not. The treated group developed much smaller tumors than the untreated group.

A second study, also involving mice deliberately given cancer by injection, focused not on tumor size but on survival times[vii]. A pink oyster mushroom-derived substance was used to treat groups of mice at several different dosages. Two of the treatment groups survived for the length of the study, whereas many of the untreated mice died—however, the mice treated with a very high dose also died.

One study involving groups of rats showed that an extract of pink oyster mushroom significantly increased a specific aspect of immune function[viii]. Curiously, the rats were not actually sick; instead, their immune systems were challenged with a substance expected to stimulate a response but not capable of causing real illness.

One study looked at pink oyster mushroom as a possible treatment for high cholesterol[ix]. Groups of otherwise normal rats were deliberately fed an extremely unhealthy diet, in order to give them high cholesterol. Some of these rats were also given mushroom extract. Those rats who did not get the extract did indeed develop high cholesterol, while those receiving the mushroom did not, remaining more similar to the rats receiving a standard diet.

There are many species in the Pleurotus genus, all of which can be called oyster mushrooms. Some have been these have been the subject of medical research, and the genus as a whole appears to have a lot of potential in medicine, most of which is still untapped[x]. Only some studies addressed the pink oyster mushroom, P. djamor, specifically, and it is not unusual for even closely-related species to have very different properties, but the health benefits shown for other oysters (at least in vitro) do suggest that pink oyster could have more to offer than has yet been confirmed.

Health benefits of other Pleurotus species include:

Pleurotus mushrooms can also be used to support the growth of beneficial microorganisms in fermented dairy products, such as yogurt, and to inhibit colonization by unwanted microorganisms. Mushroom extracts have also been used successfully as an ingredient in cosmetics.

As noted, at least some oyster mushroom extracts can hurt mice if used in too-high doses, while other types of extracts have not been tested in living beings at all, meaning that the therapeutic dosage is unknown. However, few, if any, of these extracts are available commercially.

Pink oyster itself can be eaten freely as food.

Eaten as food, oyster mushrooms are generally safe, though some people report mild allergies, either to the mushroom when eaten or to the spores when inhaled; the spores are not a problem for consumers, but growers can have trouble, especially hobbyists who keep grow kits in their bedrooms for convenience.

Oyster mushrooms are not generally eaten raw, though whether raw oysters are actually unsafe to eat raw (as is the case with some edible mushrooms) seems unclear. In any case, raw pink oyster mushrooms don’t taste very good and have a shorter shelf-life than the cooked mushrooms.