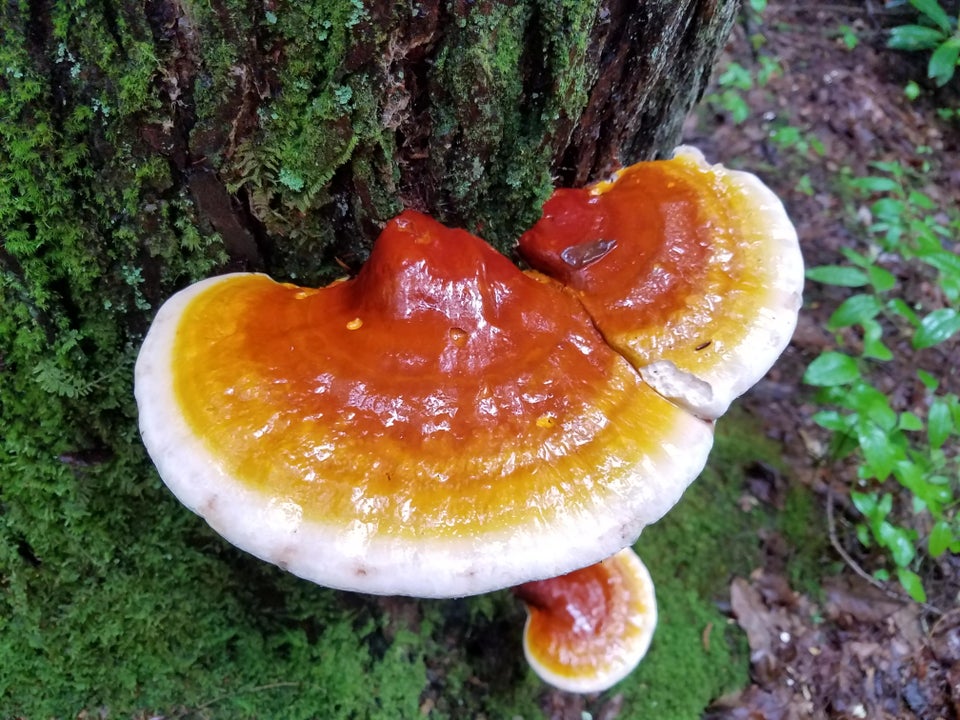 Ganoderma tsugae is one of the most common species of the Ganoderma fungi family. It is a basidiomycete white-rot fungus used for therapeutic medicinal purposes in particular in China, Japan and Korea for centuries. Mushrooms have been well characterized in recent decades and have been shown to have a variety of bioactive substances, including but not limited to, immunostimulatory polysaccharides, proteins, and lipids [1.] Ganoderma tsugae is one of the most famous of the traditional Chinese medicines having been used to promote a long and healthy life [2.] and in the treatment of cancer [3.] Ganoderma tsugae is also known as Reishi or Songshan Lingzhi [4.] other names include Hemlock Varnish Shelf, due to its shiny lacquered appearance. The brilliance of the appearance of yellow in new growth gives the impression of a setting sun. This ancient remedy appears to have medicinal benefits that are very suited to the modern era. Family member Ganoderma lucidum has also been extensively researched for its therapeutic properties and as a result is commonly referred to as Reishi, this is the name that is given to the Ganoderma genus.

Edibility: Edible; the fruiting body is best prepared with hot water or alcohol for extraction of nutrients and medicinal compounds.

Scientific evidence has been presented demonstrating the positive effects of Ganoderma tsugae administration in some cancers with polysaccharides, isolated from its fruiting body, shown to have anti-tumorigenic properties [4.] Sarcoma/180 mice administered with Ganoderma tsugae extract had reduced tumor growth and there was 194% survival rate when compared to those mice with tumors that did not receive the Ganoderma tsugae protein-glycan extract [5.] In human chronic myeloid leukemia, the in vitro application of Ganoderma tsugae directly to leukemia cells showed cell proliferation inhibition by halting the normal cell proliferation cycle, decreasing cell survival and, enforcing cell death via mitochondrial and apoptotic pathways [3.] Furthermore, the rise in autophagy-related proteins indicate an increase in cellular turnover pathways, this may be indicative of Ganoderma tsugae also having protective functions by recycling of cellular components.

Studies looking at colorectal cancer in vitro and in vivo, have also shown the inhibition of cell proliferation in cells following Ganoderma tsugae application [6.] and  cells overexpressing HER2 (human epidermal receptor 2) showed enhanced tumor growth inhibition when the Ganoderma tsugae extract was administered alongside some cancer treatments (e.g. taxol,cisplatin) [7.] This is of particular importance when considering cancers where HER2 is over-expressed; such as some breast cancers etc.

Further evidence supports anti-tumorigenic properties but it is important to note successful doses were varied and results dependent on the specific complexes isolated from Ganoderma tsugae [2.]

A mouse model was used to determine that extracts from Ganoderma tsugae had an anti-inflammatory effect on bronchoalveolar inflammation; it is thought that this was due to the reduction in the number of immune cells infiltrating the afflicted site in addition to, the release of local mediators of inflammation in the affected lung tissue area [8.] – this is important to consider because bronchial inflammation is observed in asthma and Ganoderma tsugae may be potentially therapeutic in mediating the effects of such chronic conditions. Further evidence supports a role for Ganoderma tsugae in immune-modulation of the Th1/Th2 balance however further work is necessary to establish the level of active ingredients reaching the bloodstream and/or target cells; therefore, the authors suggest a low dose, long-term supplementation may be the way forward [9.]

Ganoderma tsugae has proven to positively impact on rapid wound healing following injury. Using a membrane, Sacchachitin, produced from weaving the residual fruiting body of the Ganoderma tsugae, improved wound healing occurred when compared to gauze in vivo. Additionally, there was an increase in proliferation and migration of fibroblast cells, in culture, in the presence of the Ganoderma tsugae -derived membrane [11.].This provides evidence for a role of Ganoderma tsugae in the repair of animal tissue following an injury that may be due to the mobilisation and localisation of the necessary fibroblast cells. The effects of the membrane, sacchachitin, have also been observed with keratinocytes and scar tissue (Collagen Type 1) being present earlier in wounds treated with sacchachitin when compared to controls; furthermore, blood supply to the wound may have been present for a longer period, enabling access for appropriate cells and molecules involved in healing, promoting rapid wound healing [12.]

An optimum dose of Ganoderma tsugae has not been established due to the difference in nature of the various biologically active components of the Ganoderma tsugae, meaning that the optimal biologically effective activity differs depending on the condition and relative dosage [4.& 2.] This is an area that continues to be explored in order to ensure the extracts are as rich in the relevant biologically active compounds as possible. It is important to note that different molecules will be more effective under specific conditions and potentially in relation to certain disease conditions. It is noteworthy that a lack of side effects is reported from the administration of Ganoderma tsugae [6.]

Whilst there is substantial evidence for health benefits provided by Ganoderma tsugae, it should not be used as a replacement for conventional therapy as prescribed by a physician. Always seek medical advice before therapeutic self-administration.