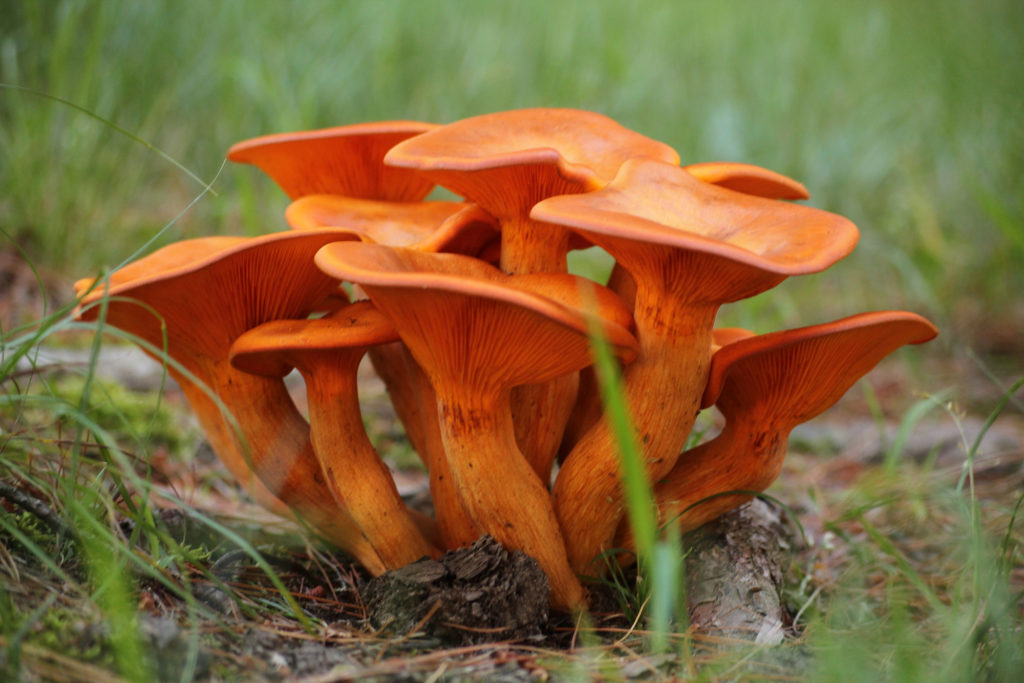 The scientific name for Jack-o’Lantern is Omphalotus illudens, this mushroom is a basidiomycete [1]. Investigations of the properties from this mushroom were published back early in the 1900s when this fungus was more commonly known then as Clitocybe illudens [2] [3]. Original studies also suggested that there was a synonymy between Omphalotus illudens and Omphalotus olearious however, DNA examination confirms they are two distinct species [4]. The Jack-o’Lantern mushroom is large and strikingly bright orange. It is found in clumps usually on large stumps of wood or fallen branches and the decaying roots of deciduous trees. Jack-o’Lantern is a poisonous mushroom and when ingested can cause diarrhoea and vomiting [5]. It has been known for its toxic properties in Japan for some time with occasional fatalities, thought to be linked to its similar appearance to edible mushrooms [6].

Cap: 3-20cm; starts convex with a central “nipple” before flattening.

Gills: Bright orange; features true gills running down the stem; crowded. Gills are said by some to be mildly bioluminescent and can be seen to glow green in the dark; others argue that this is a myth.

Edibility: Poisonous and should not be ingested.

Omphalotus illudens is the source of a number of sesquiterpenes, of which some were identified pre-1950s as having anti-bacterial properties [1], although the specific factors responsible were not known at the time. Bacterial growth inhibition was observed, in dishes with the presence of components from Omphalotus illudens, following the application of cultures of Staphylococcus aureus, Mycobacterium smegma. A greater effect was seen in the presence of Mycobacterium smegma but very little growth inhibition was observed in the presence of Escherichia coli. The first identified sesquiterpenes were illuden S and illuden M [8] and they were identified as the components of  Omphalotus illudens responsible for the anti-bacterial properties observed in vitro.

Investigation and analysis of the mature fruiting bodies of Omphalotus illudens identified anti-viral properties in an assay using HSV-1 (Herpes Simplex Virus Type 1) in vitro. The specific component of the mushroom thought to be responsible for the anti-viral properties was illudin S1 [9].

Illudins S and Illudins M are incredibly cytotoxic products of Omphalotus illudens [10] and as such have been examined for their use as anti-tumorigenic therapeutics. They have shown selective toxicity for cancers including leukaemia, breast, lung and ovarian [11]. The toxic effects from ingestion of Omphalotus illudens mean that it cannot be taken directly however, less toxic chemically modified variations to the compounds are of interest. ­Irofulven is semi-synthetic derivative of the illuden S isolated from Omphalotus illudens. [12]. Irofulven is a patented drug that has been used in clinical trials looking at anti-tumor properties. The drug is a semi-synthetic compound based on illudin S a sesquiterpene known to be a toxic compound found in Omphalotus illudens [13]. Trials have provided varied results, with some positive effects of irofulven seen in hormone-refractory prostate cancer [14]. A new study is in place looking at specific biomarkers in late stage prostate cancer and the effectiveness of Irofulven administration.

Jack-o’Lantern (Omphalotus illudens) is poisonous and should not be consumed. Please take medical advice immediately if the mushroom is ingested as it may cause sickness, diarrhoea and/or affect liver function [7].