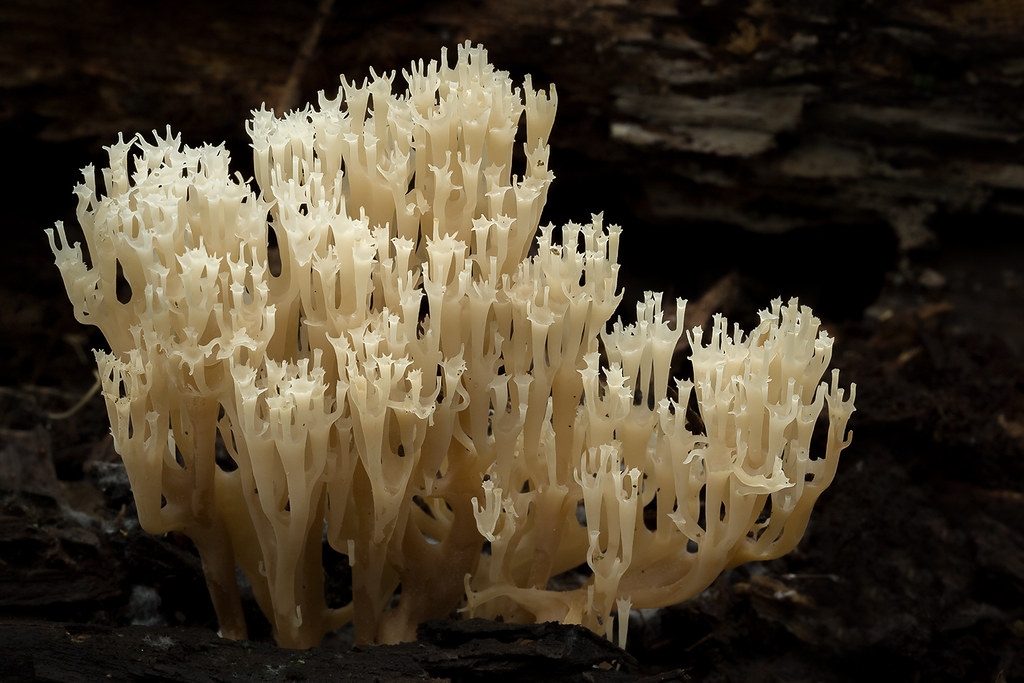 Artomyces pyxidatus (pers. Ex Fr.) Jȕlich, is a fungus that also not unsurprisingly is known as crown coral or the crown-tipped coral mushroom. Artomyces pyxidatus is found growing on wood, usually hardwood and its fruiting body producing branch-like structures that look that coral found on the ocean floor; others describe it as looking like a candelabra. The defining and distinctive characteristics are the crown-looking tips of the branches. The pyxidatus means like a box, in reference to its shape.

Artomyces pyxidatus was originally known as Clavicorona pyxidata; however, in 1981, following DNA examination, this mushroom and closely related mushrooms were given their genus. Clavicorona pyxidate is now known as Artomyces pyxidatus, but the literature uses both names interchangeably. Artomyces pyxidatus is found in temperate regions in the Northern Hemisphere, in particular North America, but it is uncommon in Western Europe. This mushroom is usually found to the east of the Rocky Mountains. It fruits between April and even as late as November, and can often be seen when other mushrooms are not fruiting. The branch-like projections give Artomyces pyxidatus a much larger surface area when compared to other common mushrooms, this area enables the release of more spores and therefore, enabling spread to new areas, with available wood for food. This mushroom is edible. When raw Artomyces pyxidatus fruiting bodies taste like pepper, this can start mild but become very intense. This peppery taste is often, but not always, lost to cooking.

Cap: No distinctive cap.
Fruiting body: Variable; up to 13cm high and 10cm wide. The branch repeats are up to 5mm thick for primary branches but thinner for secondary. Creamy white to a pale yellow, sometime whitish pink; brownish tips on the branch ends. The coral fungus goes browner with age. Pliable yet firm texture flesh. The base of the mushroom that attaches to wood is brown.
Gills: Not present.
Stem: Mostly central and covered with brown hyphal bundles, making it look furry.
Smell: Non descriptive or earthy.
Taste: Mild in taste, peppery when raw.
Spores: Elliptical. The projecting coral branches are covered with basidia and these produce the basidiospores.
Spore color: White
Edibility: Edible, nice as a garnish as a salad.
Habitat: Grows both alone and clustered on wood, especially hardwoods covered with moss. Decomposes dead wood, is not found growing directly from the ground unless foliage is covering fallen wood. It is one of the few coral fungi that fruit on wood. Grows from April to November.
Ecology: Saprobic.
Phylum: Basidiomycete Fungi; Class: Agaricomycetes; Order: Russulales; Family: Auriscalpiaceae; Genus: Artomyces & Species: Pyxidatus.

A similar looking coral mushroom is the yellow-tan coloured Ramaria stricta this mushroom also grows on wood; although, they do grow directly from the ground. The tips of Ramaria stricta are pointed rather than having crown-like structures, and Ramaria stricta has larger basidiospores. Although there many coral fungi, most are not related to each other; however, they have evolved with similar features.

The bioactive properties have been long exploited in China for medicinal purposes. Artomyces pyxidatus is a wild mushroom used as in traditional medicine in China for curing gastric discomfort, indigestion, gout and heat-toxicity [1.].  Three new sesquiterpenes, pyxidatol A – C were isolated from a culture of Artomyces pyxidatus (known at the time as Clavicorona pyxidata). These were in addition to two known ones, tsugicoline E and omphadiol [1.]. It is noteworthy that sesquiterpenes can have cytotoxic effects on cells [2.], this is important when considering cancer therapeutics. Much work is being carried out into the beneficial properties of sesquiterpenes, which will vary between individual molecules; this is promising nonetheless.

There were some early indications of antimicrobial effects and anti-viral properties of Artomyces pyxidatus; the anti-viral effect was seen in animal strains of virus including an Avian virus [3.]. There is no further literature to support these original findings; however, one has to consider this may not necessarily be due to a lack of results, but rather research.

Alzheimer’s disease is characterized by the build of protein in cells in the brain; the proteins in Alzheimer’s disease form plaques and tangles. The plaques are due to the presence of Abeta and the tangles, the Tau protein. Important scientific research showed that the presence of Abeta in vitro is decreased when administered a mycelial extract of Artomyces pyxidatus [4.]. The group have continued to work on the mechanisms that may be behind this positive effect of reducing a potentially pathological protein, and they observe that Artomyces pyxidatus provides inhibitory effects on some important enzymes including an enzyme called acetylcholinesterase (AChE). AChE breakdowns down acetylcholine, a neurotransmitter that is lost in Alzheimer’s disease [5.] this leads to the cognitive changes associated with the disease. The prevention of the breakdown of any remaining neurotransmitter may prove positive in treating symptoms.

The Artomyces pyxidatus is not considered toxic; however, if eaten in excess, it may contribute to gastrointestinal issues, such as diarrhea and stomach cramps. Do not pick mushrooms that have a phenol smell or a slimy, liquid base. It is essential to always take medical advice before seeking to self-medicate with mushrooms; this is important to ensure that there are no contraindications.