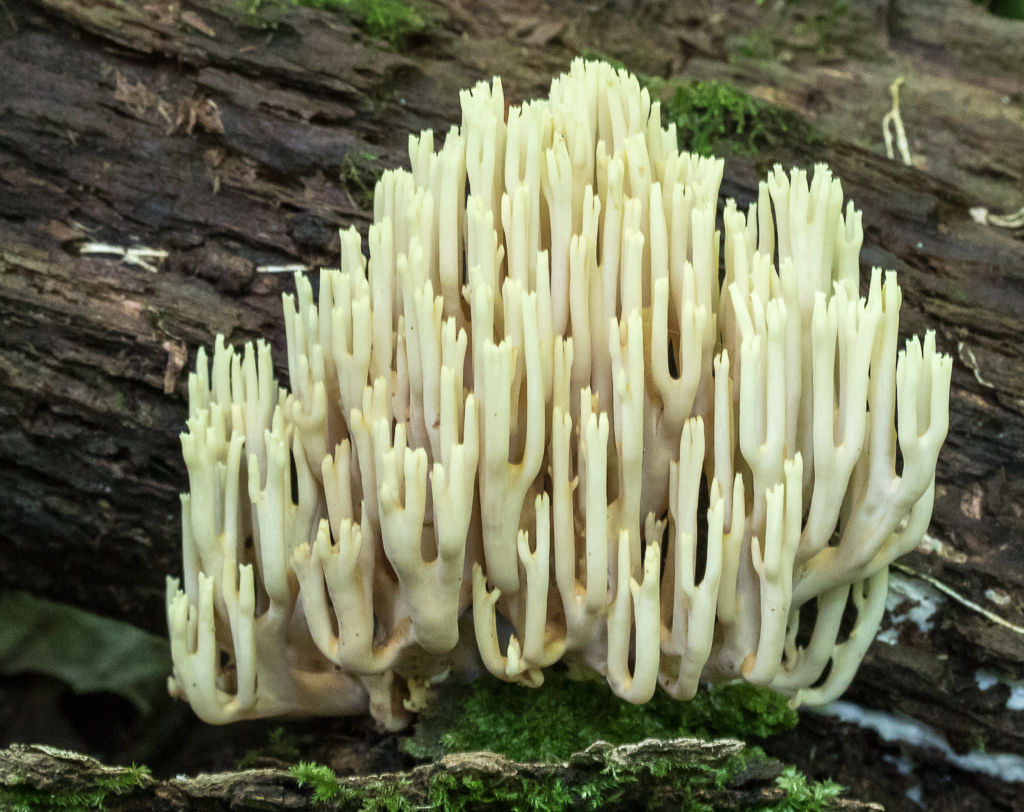 Ramaria stricta, more commonly known as the Strict Coral or Straight-Branched Coral Mushroom, is a yellowish coral mushroom, with compact, upright branches that are found throughout the world.[i]

This species was first described under the name Clavaria stricta in 1797 by the German mycologist Christiaan Hendrik Persoon. However, in 1888 the French mycologist Lucien Quélet reclassified this species under the genus of Ramaria and termed it Ramaria stricta. The epithet “stricta” is derived from the mushroom having straight, ascending branches that sharply point upward.

Furthermore, it is commonly agreed upon that Ramaria stricta represents a group of potential species that have yet to be fully studied rather than a single species. For example, in certain mycological literature, Ramaria stricta comprises two recognizable varieties: R. stricta var. stricta which grows in coniferous woods and is yellowish and openly branching, and R. stricta var. concolor which grows in deciduous forests and is grayish-orange and more compact.

Flesh: The flesh of the fruiting body is tough and pliant. It is white in color.
Spores: The spores of this species are elliptical, minutely roughened/warted, and have clamp connections. They measure 7.5-10.5 by 3.5-5 microns.
Spore print: R. stricta has a cinnamon-ochre to rusty yellowish spore print.
Smell: This species has a faintly sweet odor. Some mycological sources report that it may smell like aniseed.
Edibility & Taste: Ramaria stricta is NOT considered edible. It has very little consumable flesh that is said to taste often somewhat metallic or bitter.
Habitat: R. stricta is thought to be both mycorrhizal or saprobic depending on the stage of its growth cycle. It can be found growing solitary or in groups or tufts on buried rotting stumps, logs, trunks, and branches of hardwoods (especially Beeches) and conifers.  They are known for forming “log lines”, meaning they grow in rows originating from buried or extremely decomposed logs near the surface.
Fruiting season: This species fruits from July to November. Some mycological sources state that this species may fruit well into winter.
Range: Ramaria stricta has what is known as a “cosmopolitan” range. This means that it is a rather common species that can be found growing throughout most parts of the world. In the United States, it is more frequently found in states west of the Rocky Mountains, such as Washington, Oregon, Nevada, Utah, and Idaho.

R. stricta should be differentiated from other Ramaria species based on its distinctive characteristics which include the upright, parallel orientation of its branches and the yellowish branch tips. Primarily differentiation should be made between those species that also inhabit decaying wood.