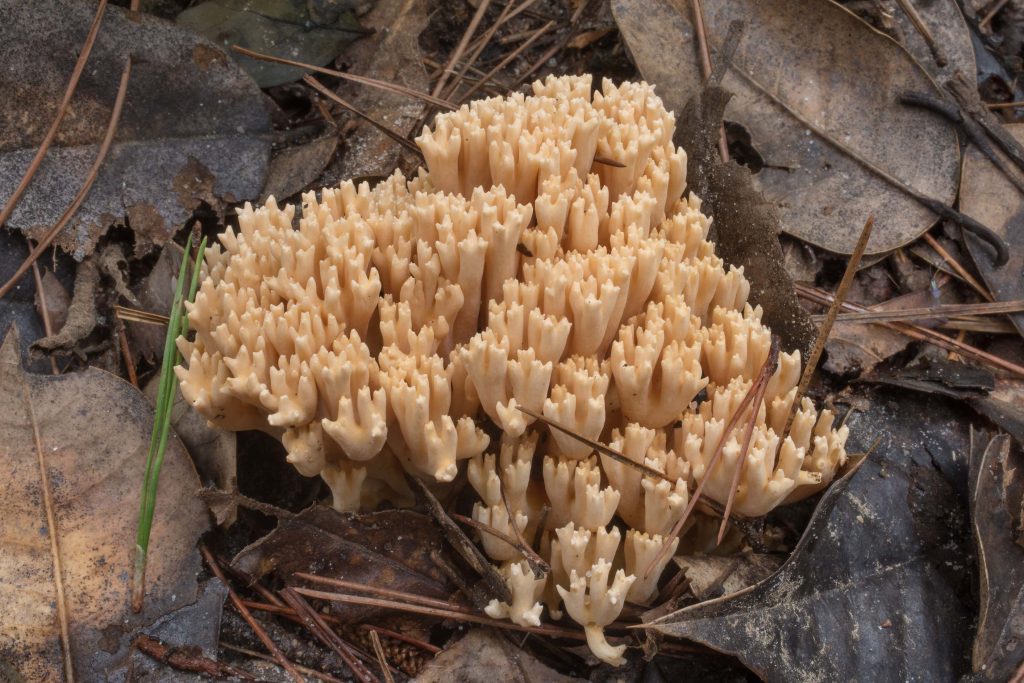 Ramaria formosa is justified in being called the “Beautiful Clavaria”. In its early form, this rare, broadleaf woodland fungus has striking coral- or salmon-pink branches, with distinctive and well-contrasting yellow tips.  Unfortunately, this truly beautiful young form does not last long, and with maturation, the fruiting body will become a rather boring washed-out orangish tan color. [i]

The name of the genera, Ramaria, comes from the fact that mushrooms in this genus possess numerous branches. Hence, “Ram-“ meaning Ramus or branch , and “-aria” meaning having or being furnished with. As for “formosa”, refers back to the beauty of this specific species, derived from the Latin word “formosus” meaning beautiful. Thus the name of this species means “beautifully branched” or “beautifully formed”.[ii]

In 1797, the German mycologist Christian Hendrik Persoon first described this species under the name Clavaria formosa. It was not until 1888 that this species would come to be known by its currently-accepted scientific name thanks to the French mycologist Lucien Quélet who redescribed it as Ramaria formosa.[iii]

Fruiting body: The fruiting body is coral-like, measuring 12 to 20 cm high and broad.

Flesh: The flesh of the fruiting body is soft, solid, and pinkish orange in color. The flesh becomes brittle and chalk-like when dry and bruises pinkish-brown on handling. Furthermore, it is inamyloid meaning that its flesh does not turn a red or blue color when treated with Melzer’s reagent or Lugol’s solution.
Spores: The spores of this species are oblong to stretched-elliptical and have a roughened/warty surface. The size of the spores is variable, they measure 8-15 x 3-6 µm.
Spore print: R. formosa has an orange to yellow spore print.
Smell: No distinctive odor.
Edibility & Taste: Ramaria formosa is poisonous/toxic and is NOT edible. This species is said to have a bitter taste.
Habitat: R. formosa grows single, scattered, or gregarious on the ground in mycorrhizal association with hardwoods and conifers, such as oak, Douglas-fir, and western hemlock.
Fruiting season: This species fruits from July to November.
Range: According to most mycological sources this species can be found widely distributed throughout many North America as well as throughout most of continental Europe, particularly concentrated around the Mediterranean and the Iberian Peninsula.

Ramaria formosa can sometimes be confused with other Ramaria species. Two important features that will help distinguish R. formosa from other species include:

If the bitter taste does not deter one from ingesting this species, they would subject themselves to mild to moderate, self-limited gastrointestinal toxicity manifested by variable symptoms such as nausea and/or vomiting, colicky or crampy abdominal pain, and diarrhea.