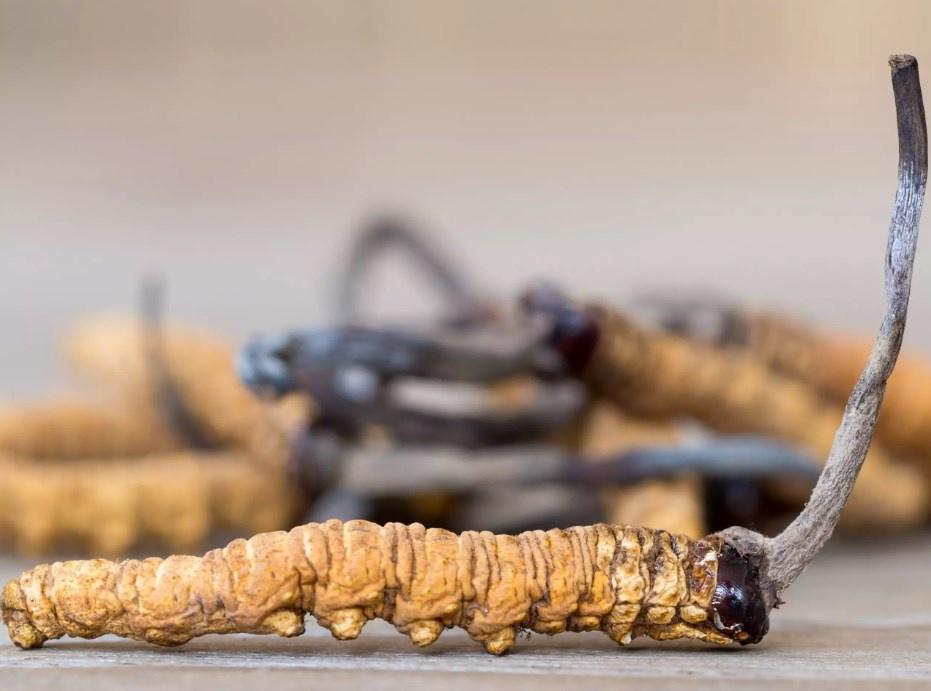 This exotic species has a highly confined geographic distribution, being endemic to “Roof of the World”, which refers to the high alpine regions of the Tibetan plateau, encompassing areas of India and Western China.

As a medicinal mushroom, it is highly coveted in Tibetan and traditional Chinese medicine (TCM), with the earliest documented reports of use dating back to the 15th century. The Pharmacopoeia Commission of the Ministry of Health of the People’s Republic of China has classified Ophiocordyceps sinensis as a “drug” since 1964, with purported therapeutic effects spanning nervous, cardiovascular, respiratory, renal, hepatic, gastrointestinal, immune, and sexual/reproductive systems.

The history and etymology of this species are quite long, problematic, and somewhat controversial.

From a historical perspective, this species appears to have been first introduced to Europe by Father Dominique Parrenin, a French Jesuit missionary to China, who in 1723 sent specimens of O. sinensis to the French Academy of Sciences.

What is currently known as Ophiocordyceps sinensis appears to have been identified, or rather misidentified, by the English entomologist John O. Westwood in 1842 as Clavaria entomorhiza. The same species was again identified as a new fungal species in 1843 by the pioneer English plant pathologist Miles Berkley, who termed it Sphaeria sinensis. Several decades would pass, and for reasons unknown, Berkley himself as well as several other mycologists would reclassify Sphaeria sinensis as Cordyceps sinensis. This species finally received its current name of Ophiocordyceps sinensis in 2007, when the molecular phylogenetic classification of Cordyceps and the clavicipitaceous fungi was undertaken.

This species is also known by numerous names in different countries and regions. Fortunately, these names are a variation of the old Chinese name “Hia tsao tom tchom”, which in English means “plant in summer and worm in winter”. This name harkens back to the belief that O. sinensis was a summer plant that changed into a worm during the winter.

Some of the “common” variations of this old Chinese name are in various Chinese dialects, Japanese, and Korean.

C. sinensis also has an alternative name in Tibetan, “Yartsa gunbu”, which is used in Nepal, Bhutan and India. Similar to how the old Chinese name has variations, this name too has alternative variations such as yartsa gunbu, yartsa guenbub, yarchagunbu, yarcha, yarsagomba, yarsha gumba, yarcha gumba, and yarsa gumba.

The epitaph “cordyceps” derives from a combination of Latin words meaning “club and head”.

Ophiocordyceps sinensis is a rather a unique fungus. As mentioned, this species is entomopathogenic, meaning that it is a parasitic species that infects insects and kills or disables them. O. sinensis has this type of entomopathogenic relationship with around sixty to seventy species of moths, mostly the species of Hepialus, Bipectilus, Hepialiscus, and Forkalu. These moths are also commonly known as the ghost, swift, or bath moths.

The immature forms of these moths, such as larvae or pupae, usually lie several inches under the forest floor and feed on the roots of alpine plants. These host larvae are most frequently infected by the parasitic fungus from the middle of July to the end of August. Over the next several months, the fungus will grow by deriving nourishment from the larva and will eventually consume over 90% of the larva. Eventually, most commonly during the winter months, the larva will die from the infection and will become mummified.  The fungus will continue to grow inside the dead larva and its fruiting body will emerge from the mummified exoskeleton in the spring.

The complex of O. sinensis consists of two parts, the lower basal caterpillar consisting of the body of the dead larva and the stroma which represents the fungal fruiting body. The stroma itself is further divided into two parts, the basal stem, and the upper head. However, it is worth noting that O. sinensis just refers to the stromal part.

Basal caterpillar: The body of the dead larva is remarkably well preserved. It is solid, fully intact and its body parts, such as the head, eyes, neck, corpus segments, belly, and legs are all visible. The body of the caterpillar is yellow to brown and measures 3 to 4 cm long.

Fruiting body/Stroma: The stroma grows out of the head region (back part of the neck) of the caterpillar. The stroma is singular, dark black, or brown, and measures approximately 4 to 10 cm.  As previously mentioned, the stroma also has two components. The stem of the stroma is slender and smooth, with longitudinal ridges, and measures 2.5–8.5 cm in length and 2–3 mm in width. While the head is moderately rounded, fusiform, and well demarcated from the stem. The head measures 2 to 4 mm in length ad 2 to 4 mm in width. Furthermore, unlike the stem, the head is granular due to protuberant small openings of perithecia.

Micro-morphological features of Ophiocordyceps sinensis are also useful features for the identification of this species. However, it is important to note that there is great size variability in these features of O. Sinensis.

Perithecium– Closely spaced around the rounded head. They are deeper in the head when young but become more superficial when mature. They vary in shape and can range from globose, ellipsoid, ovoid, and sub-truncate to oblate. The inner layer of the perithecia is most often described as pale yellow, and measures approximately 20–25 μm wide, while the outer layer is described as dark black. The overall perithecial size ranges from 200-500 by 140-300 µm.

Asci– The asci are cylindrical or slightly tapering at both ends, straight or curved, with a capitate and hemispheroid apex. Initially, there are eight primordial ascospores, out of which only two to four spores develop to maturity. There is a wide range of ascus sizes provided in literature that range from 100-485 to 5.2-14.6 µm.

Ascospores- The ascospores are hyaline, filiform, multiseptate, and slightly tapering at both ends. The size of the ascospores also varies significantly, the sizes can range from 80-240µm.

Ophiocordyceps sinensis has a rather confined geographic distribution. It prefers to grow in high-altitude regions approximately 3800 meters (2,300miles) above sea level, in grassy, cold, alpine regions of the Tibetan plateau.

The list of countries and the altitudinal ranges at which O. sinensis can be found include:

The geographic distribution of O. sinensis is very limited and due to unsustainable harvesting, its numbers have significantly diminished. Currently, O. sinensis has been classified as an endangered species by CITES (Convention on International Trade in Endangered Species) Management Authority of China and China Customers. This is the reason Codyceps Sinesis is considered the most expensive mushroom in the world and the reason all Cordyceps supplements are derived from Cordyceps Militaris.

Ophiocordyceps sinensis has a long history of being a medicinal mushroom, and its various extracts, powders, and concentrates are purported to have a variety of health benefits.

The purported health benefits are thought to be attributed to the variety of bioactive compounds such as nucleosides, steroids, cyclopeptides, polysaccharides, fatty acids, and sterols.

The following is a brief list of some of the supposed therapeutic effects that are supported by various clinical studies.

A study Cordyceps sinensis mycelium induces MA-10 mouse leydig tumor cell apoptosis by activating the caspase-8 pathway and suppressing the NF-κ B pathway published in the Archives of Andrology found that bioactive compounds derived from O. sinensis are promising for cancer therapy as they active apoptosis (programmed cell death) of malignant cells and have anti-metastatic properties.

Studies by Kuo et. al. regarding The regulation of bronchoalveolar lavage fluids cell function by the immunomodulatory agents from Cordyceps sinensis published in the journal of Life Sciences and the Immunomodulatory effect of exo-polysaccharides from submerged cultured Cordyceps sinensis: enhancement of cytokine synthesis, CD11b expression, and phagocytosis published in the journal of Applied Microbiology and Biotechnology have found that bioactive compounds derived from O. sinensis suppress pro-inflammatory molecules such as IL-1β, IL-10, TNF-ɑ, IL-12, INF𝛾.

A study about the Anti-fatigue and anti-stress effect of the hot-water fraction from mycelia of Cordyceps published in the Biological and Pharmaceutical Bulletin found that bioactive compounds derived from O. sinensis reduced fatigue and boosted stamina in mice.

Several studies from China have shown that O. sinensis exhibits nephro- and hepatoprotective effects by attenuating the expression of α-SMA and FSP1, and therefore inhibiting the TGF-β1/ Smad pathway which is known to be associated with the renal and hepatic fibrosis. Furthermore, Cordyceps may also be reduce hematuria and proteinuria and improving clinical and histopathologic pictures in various immune glomerulonephropathies.

There is no information about concrete dosages of O. sinensis. The following are various dosages that have been used anecdotally or during clinical trials:

There is very little detailed information available regarding adverse reactions and drug-to-drug interactions associated with O. sinensis use.

There are two specific drug-to-drug interactions individuals should be aware of regarding O. sinensis.

Lastly, as is common with most herbs in Traditional Chinese Medicine, contamination of Cordyceps with lead wire or solder is also a serious concern.