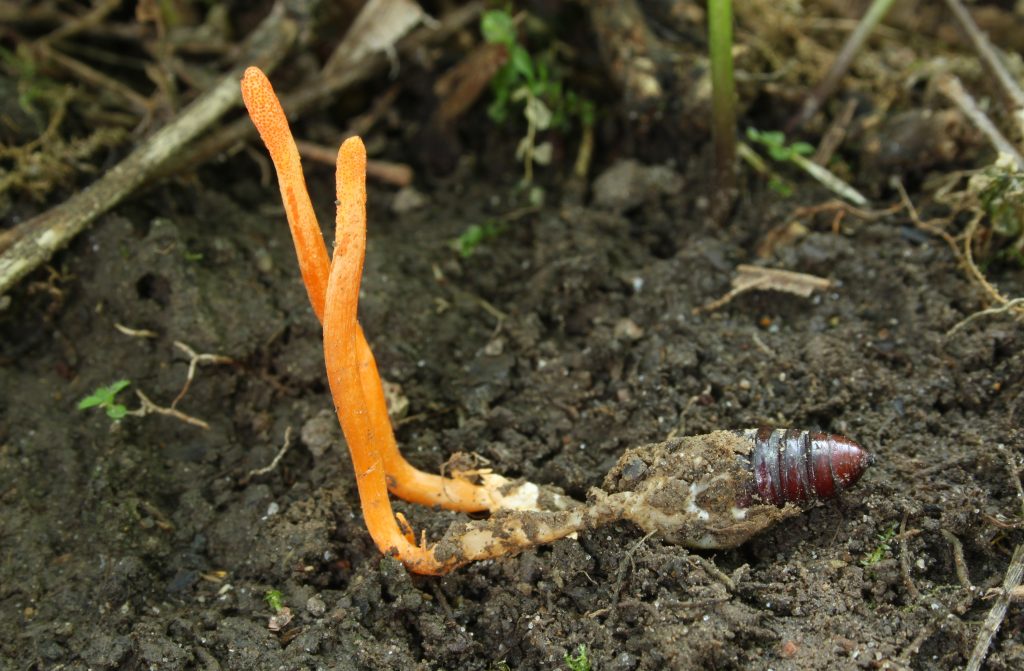 Cordyceps militaris is a predatory fungus that kills and eats insect larvae or pupae (usually those of moths). It is one of a group of predatory fungi, each of which has its own favorite prey. Some attack other fungi, while others attack insects. The details of their hunting methods are fun to think about, if you’re into horror, and is one reason why these tiny, club-shaped fungi are widely known. The other reason for their fame is that one member of the Cordyceps genus, Cordyceps sinensis, is the most expensive medicinal mushrooms in the world. Other members, including C. militaris, are sometimes recommended as an affordable alternative.

Whether C. militaris is really as effective as its more expensive cousin is an open question. Claims for the effectiveness of both species vary widely, and even some information that ought to be pretty basic is inconsistent between sources. And while C. sinensis does show promise, scientific research on its effectiveness is still in its infancy—its reputation rests largely on its use in Traditional Chinese Medicine, a tradition that is not, after all, infallible. C. militaris has almost no research behind its use at all, nor is its medicinal use traditional. Its fame rests almost entirely on its similarity to its expensive cousin.

But C. militaris, unlike C. sinensis, does grow wild in North America. While wild-harvesting the fungus is probably not a good idea, seeing it in the wild would be quite a thrill, if you know what it is and how it hunts.

(OK, obviously we need to explain the hunting behavior: a spore lands on or near an appropriate victim and germinates. The fungus invades the victim’s body and immobilizes it, leaving it alive for some time as the fungus feeds. Then it kills the insect and sends out a fruiting body from the insect’s corpse. The prey does not become a mind-controlled zombie, that would be the work of C. lloydii, a Central American ant specialist. It’s just that the whole feeding-on-a-living-body and then erupting from that body is a bit lurid. Happy now?)

These are my Favorite Cordyceps Supplement

Fruiting body: tiny, club-shaped, orangish. The upper, slightly wider part is bumpy. The lower, thinner part is smooth and sometimes curved.
Edibility: Too small to eat but used medicinally.
Habitat: the insects this fungus eats are almost always buried in soil or wood.
Range: lives throughout North America but is more common east of the Rockies. Also lives in parts of Asia.

Perhaps because C. militaris is so very small, even experts usually mistake it for all sorts of other things. Clavulinopsis laeticolor may be the closest look-alike, but there are others, including other Cordyceps species. Color and surface texture are both important field marks, before looking at spore shape or digging for that caterpillar. Remember that there is no hint of a distinct cap.

There has been very little scientific research on the effectiveness of C. militaris. Most claims to the contrary actually refer to studies of C. sinensis. The two are treated as interchangeable by some practitioners, but not by others. A complicating factor is that many writers simply refer to Cordyceps without specifying which Cordyceps is meant.

For example, the story of a Chinese women’s Olympics track and field team[ii] is sometimes put forward as proof that C. militaris works to improve athletic function. Not so fast. First, the fungus in question was actually C. sinensis. Second, although the product the women took, CordyMax, does seem to work as advertised, C. sinensis is not its only ingredient. Research is so far conflicted as to weather C. sinensis alone helps athletes. Whether C. militaris does is another question, one for which there is no clear answer.

All this is not to say that either Cordyceps species doesn’t work—one or both of them might. It’s just that we don’t know.

The following Cordyceps benefits do have some scientific support for C. sinensis, and may also turn out to be true for C. militaris[iii]. Additional benefits, such as treatment for anxiety, are sometimes claimed and may also be effective.

C. sinensis extracts are effective against various types of cancer in both experimental animals and in in vitro studies, and may also help protect against the side-effects of some kinds of chemotherapy. But there have been no human clinical studies as yet.

“Immunomodulation” means both strengthening weak immune systems to fight off infection and suppressing the immune system as a treatment for autoimmune disease or in other contexts. Extracts of C. sinensis  enhanced immune function in both in-vitro studies and experimental animals. Similar extracts also reduced the severity of certain autoimmune diseases and decreased rejection of transplanted organs—again, in experimental animals, not yet humans.

Extracts of C. sinensis interfered with various inflammatory processes in vitro and reduced airway inflammation in experimental animals, suggesting it might work as a treatment for asthma.

Various products of C. sinensis resolved hypoglycemia in both healthy and diabetic rats and mice, but without addressing certain other aspects of diabetes.

Various products of C. sinensis have enhanced both sexual function and libido in both men and women. It’s not clear how extensive these studies were, though.

“Fatigue” in a medical sense, involves several different processes. Extracts of C. sinensis can address several aspects of physiological fatigue in experimental animals. The extracts did not improve performance in human athletes, perhaps because fatigue was not their limiting factor. Other, unrelated studies have shown improvement for human athletes taking C. sinensis, though.

C. sinensis extract can address some facets of kidney damage in experimental animals.

Daily doses of up to 6 grams of Cordyceps extract should be safe for most people over at least a year—the safety of longer-term use isn’t known[iv]. As for the size of an effective dose, or what might be safe for those who aren’t “most people,” users should consult a qualified and experienced health care practitioner.

Just as not much is definitely known about the benefits of taking C. militaris, not much is known about potential side-effects and other problems—but some educated guesses suggest certain cautions[v].

Gastro-intenstinal symptoms are possible. It’s also considered possible that Cordyceps products might exacerbate autoimmune disorders and decrease clotting. It should not be taken prior to surgery. These products might also interact with immunosuppressant medication or medications that slow blood clotting. They might increase testosterone levels, though not much is known about that possibility. It might not be a problem.

These are my Favorite Cordyceps Supplement