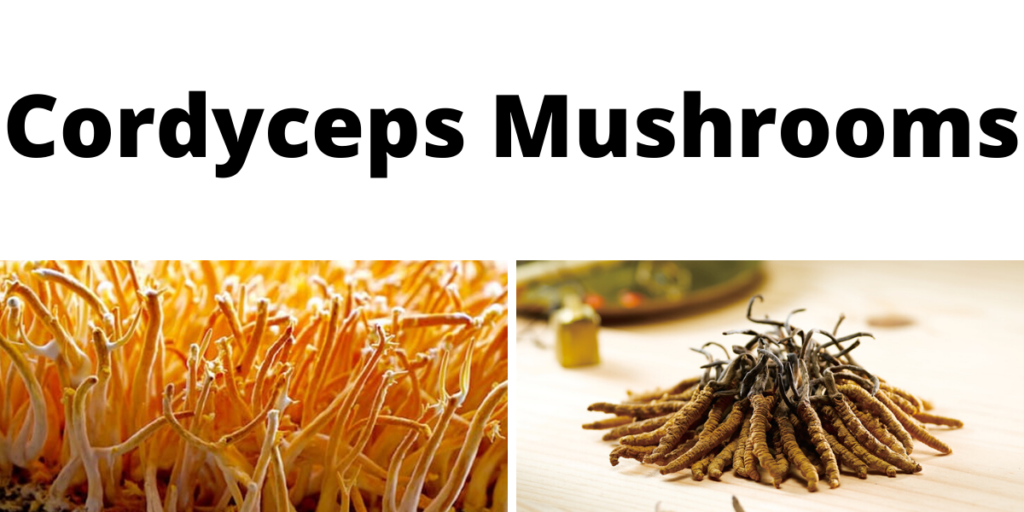 Cordyceps is a group of parasitic fungi known to infect insects. When it attacks its victim, this fungus replaces the host’s tissue and produces a mushroom-like stem that grows outside the body.

The dried remains of the insect and the cordyceps fungus have been used in Traditional Chinese Medicine for thousands of years, where it is known as “winter-worm summer-grass.” East Asian folk consider cordyceps to be an exotic mushroom and use it as such, specifically for boosting the immune system, supporting kidney health, enhancing sex drive, promoting longevity, and improving overall health and vitality.

Today, cordyceps is used in an increasingly-wide range of dietary supplements purported to help with everything from exercise performance to libido. Although medical research is still in its early stages, current findings are promising, and many people are rightfully excited about cordyceps’ potential as a multi-purpose natural remedy.

The reason for the hype behind cordyceps is its long list of potential health benefits. Although there is currently a lack of high-quality clinical research evidence, early studies suggest that cordyceps can enhance athletic performance, combat the aging process, help regulate blood sugar levels, boost the immune system, reduce inflammation, and support sexual, kidney, liver, and cardiovascular health. Let’s explore these benefits and the associated research in more detail.

A similar study in 30 older adults given placebo or Cs-4 while using a stationary bike reported a 7% improvement in VO2 max, a common measure of cardiovascular fitness. (2)

In addition, multiple animal studies demonstrate that mice given cordyceps swam longer before fatigue and had higher muscle levels of glycogen – a source of energy during exercise. (3, 4)

One possible explanation for this is that cordyceps may enhance the body’s production of adenosine triphosphate (ATP) – the key energy molecule. (5) Given these effects, it’s not surprising that an increasing number of sports supplements are using cordyceps as an ingredient.

Researchers believe cordyceps achieves this by reducing oxidative stress – a state of imbalance between the levels of reactive oxygen species (ROS) and antioxidants in the body. (9) Oxidative stress is implicated in a wide range of health issues and also appears to play a key role in human aging.

In traditional medicine, cordyceps is also famed for its ability to boost sex drive. So far, early research in humans and animals indicates that cordyceps can indeed boost libido and sexual function. (10) These effects may be explained by enhanced testosterone production and relaxation of blood vessels, which can improve blood flow and oxygen delivery. (11, 12)

May Help with Tumors

Early research suggests that cordyceps may also have some anti-tumor properties. Multiple cell culture studies report that cordyceps may inhibit the growth of tumors, and these effects are supported by findings of reduced tumor size and improved longevity in mice. (13, 14, 15, 16)

In addition, cordyceps may also help with the side effects of cancer treatments such as leukopenia – a low white blood cell count. (17)

Studies have also uncovered a link between cordyceps and heart health. Animal research indicates that cordyceps may help support cardiovascular health by decreasing LDL (“bad”) cholesterol and triglyceride levels. (20, 21) In addition, it may also help with an abnormal heartbeat, a condition known as arrhythmia.

Finally, cordyceps has a longstanding reputation for boosting the immune system. Scientific research is beginning to provide evidence for this historical use, with multiple cell culture and animal studies reporting that cordyceps appears to boost various aspects of immune function, such as phagocytosis. (26, 27, 28) In addition, cordyceps may reduce various forms of inflammation. (29)

Looking for the Best Cordyceps on the Market?
=> Buy our Favorite Cordyceps Here

Although there are more than 400 species of Cordyceps fungi, only two species have received wide attention: Cordyceps sinensis and Cordyceps militaris.

Both of these species contain special types of polysaccharides (sugars) called beta-glucans – the main compound responsible for the health benefits of cordyceps and other mushrooms. However, Cordyceps sinensis and militaris also have some notable differences.

Cordyceps sinensis is the best-known species of cordyceps. This fungus is known to infect caterpillars and is commonly found in mountainous regions of China, Tibet, Nepal, and other parts of the Himalayas.

Sinensis has been collected for thousands of years, and remains a major source of income for many Tibetans and other people living in this harsh, remote region. This helps explain why the image of a dried caterpillar with the fungal mushroom is used to market cordyceps supplements.

Despite this image, the natural product is rarely used in supplements because of high costs. In fact, wild Cordyceps sinensis fetched prices as high as $25,000 per kg in 2007, making it impractical for use in dietary supplements, and making it the most expensive mushroom in the world. As such, a product labeled to contain Cordyceps sinensis does not use the actual wild fungus but a lab-grown derivative.

Before we get into the differences between cordyceps products, it is important to cover some fundamental fungal biology. A fungus that is able to grow mushrooms starts out as an underground system of tiny thread-like strands called a mycelium.

The mycelium mass can be thought of as the roots of a mushroom. However, it contains relatively low amounts of active ingredients.

On the other hand, the mushroom is the actual fruit (fruiting body) of a fungus that grows out of the mycelium and is visible above ground. Mushrooms – including the ones grown by cordyceps – contain much higher levels of active ingredients, making them ideal for use in dietary supplements.

Looking for an Authentic Cordyceps Made from Real Mushrooms?
=> Buy the best Cordyceps on the Market Here

Not all supplements are made the same way and have the same potency. This is especially true for cordyceps products, as they come in different forms with varying levels of effectiveness. Generally speaking, cordyceps supplements can be divided into three groups: cordyceps Cs-4, myceliated grain, and true mushroom extract.

Although this cultured version of cordyceps mycelia is similar to the natural product, it does not grow mushrooms. Because of this, cordyceps Cs-4 products relatively low levels of active beta-glucans (10%). If your Cordyceps product is made in China, chances are it is a Cs-4.

To make this product, cordyceps is put into a plastic bag containing sterilized grain and left to grow. This method can use either Cordyceps sinensis or militaris species.

Although it is fairly easy to grow cordyceps mycelium this way, there are two key problems. First, because it does not produce a mushroom, the end product has relatively low levels of active beta-glucans (1-3%).

Second, because cordyceps does not completely use up the grain – and cannot be separated from it – this grain ends up in the final product, further reducing its potency. Simply put, this means cordyceps myceliated grain products are not very effective.

Unlike Cs-4 and myceliated grain, a true cordyceps extract uses actual fruiting bodies (mushrooms). In this method, Cordyceps militaris fungus is grown to produce mushrooms which then undergo extraction to create a powder rich in beta-glucans. This is the only commercial method of growing cordyceps mushrooms for use in supplements.

The key advantage of using the actual cordyceps mushroom is that it contains much higher levels of active beta-glucans. Whereas cordyceps myceliated grain typically contains only 1-3% beta-glucans and CS-4 about 10%, a cordyceps militaris mushroom extract can have concentrations over 25%.

For this reason, an authentic cordyceps mushroom extract is the ideal choice when choosing cordyceps supplements. Such products are easiest to identify by the high levels of beta-D-glucan listed on the label.

Another important factor to keep in mind with cordyceps extracts is the extraction method. Generally speaking, there are two types of extraction used to prepare cordyceps products: hot water and alcohol.

A hot water extract uses a similar method to making broth out of chicken bones. First, the desired raw material (in our case, cordyceps mushrooms) is cooked in hot water, causing its water-soluble ingredients to dissolve.

After this, the remaining solid material can be discarded and we’re left with a liquid extract. Next, this extract is spray dried to remove water, leaving behind a powder that contains all of the water-soluble ingredients from the original material.

Hot water extraction ideal for cordyceps and other mushroom extracts because it is required to break down chitin – the indigestible cell wall of fungi that contains the active polysaccharides. After this, the water-soluble beta-glucans can dissolve in the water, and then be concentrated for use in dietary supplements.

Using alcohol extraction alongside water extraction for cordyceps supplements is actually undesirable, because some of the beta-glucans end up solidifying. As a result, they are removed from the liquid solution, reducing the beta-glucan levels of the final product.

For this reason, you should avoid cordyceps products that undergo alcohol extraction.

What is the Best Cordyceps Supplement?

With its wide range of potential health benefits, there is good reason to be excited about cordyceps. Research suggests this time-tested herbal remedy may boost exercise performance and support optimal health in many different ways.

However, despite what supplement manufacturers may have you believe, not all cordyceps supplements are made equal. They are not made from wild cordyceps, use different preparation and extraction methods, and often suffer from low levels of active ingredients.

For these reasons, it is important to do your due diligence when shopping for cordyceps supplements by reading the label and any accompanying information.

As a final note, we recommend choosing a hot water cordyceps extract made from real Cordyceps militaris mushrooms (not mycelium). This will ensure that you’re getting a potent, high-quality product. The Cordyceps Supplement we suggest using is from Noomadic Herbals. It is a hot water extract, made with fruiting bodies and measured by beta-d-glucans.

2 thoughts on “Cordyceps: The Parasitic Fungi with Medicinal Health Benefits”