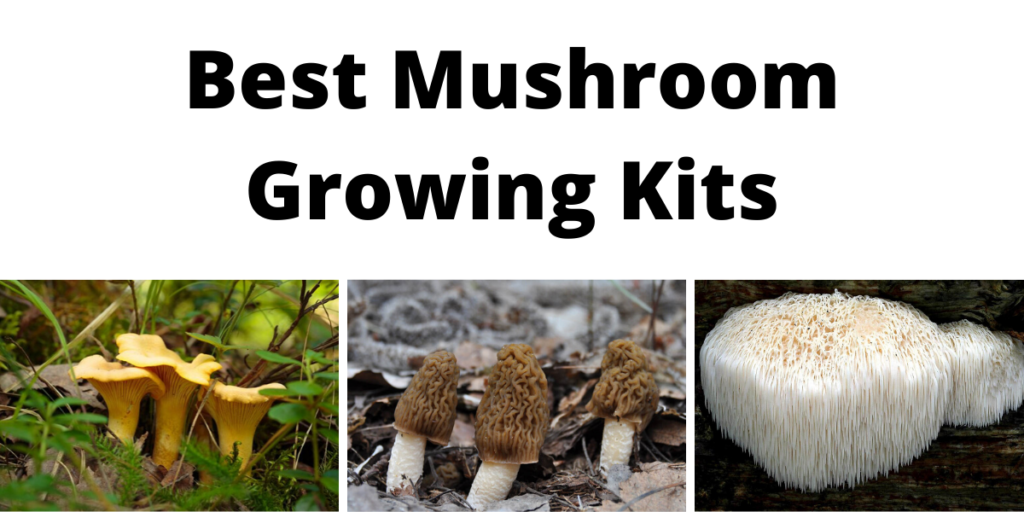 Mushroom kits[i] are a good way for absolute beginners to grow mushrooms at home. Most of the work has already been done—for some, the user only has to open up the kit, add water, and wait. Others are a little more involved, but all kits come with instructions and do not require any expertise or specialized equipment. 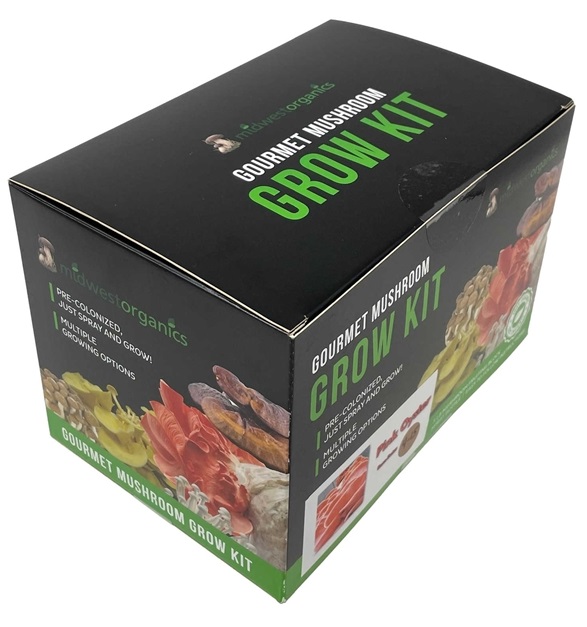 These are my favorite Mushroom Grow Kit on the Market

There are many reasons to use mushroom kits. Surprisingly, getting mushrooms isn’t always one of those reasons—the user will get mushrooms (assuming the directions are followed correctly and it’s a quality kit), but for commonly-sold varieties such as white buttons, buying mushrooms at the grocery store is far cheaper and more reliable. The advantage of a kit is getting to enjoy watching the mushrooms develop. The kits make good educational projects for children, and they’re also a good way to try out mushroom growing before investing serious time and money in the hobby.

But there are varieties of mushrooms that are difficult or even impossible to find in stores because they are not popular enough yet or because they don’t keep well or transport well. Mushroom lovers might have no access to these species besides growing them at home—and of course, home-grown mushrooms are absolutely fresh.

Which Types of Mushrooms Come in Grow Kits?

Most of the more popular edible mushrooms are available in grow kits, but picking a kit is not quite as simple as choosing which mushroom one wants to eat. Fungi vary a lot in terms of how well their needs can be met by a simple kit, how quickly they can fruit, and how much they can produce for how long. Buyers should take care to choose a species that has the growth habits, as well as the taste, that the grower likes.

It’s worth remembering that even high-quality kits[ii] sometimes take longer to fruit than the instructions suggest, or otherwise don’t quite come out as indicated. While not actually necessary, it does help to have at least some familiarity with mushroom cultivation so as to be able to tell the difference between normal variation and actual problems (such as the unlikely, but possible, contamination by a different type of fungus).

“Oyster mushroom” could actually refer to any of a large group of closely-related edible species. Most areas have at least one native oyster, but cultivation brings together a choice of species from all over the world. They are all gilled mushrooms with soft, pliant flesh (though the stems can be slightly chewy) that eat dead wood. Most are whitish or gray, or white and gray, but some are brilliant blue, yellow, or pink. Flavor, shape, texture, and size all vary with species, though most share a definite family resemblance. Many contain potentially medicinal substances, though whether it’s possible to get a medically significant dose by eating the mushrooms is a little unclear. The amount and proportion of these substances also vary between species—oyster mushrooms are not interchangeable.

Popular oyster kits include the Back to the Roots Organic Mushroom Farm and the Large Oyster Mushroom Kit by Root Mushroom Farm, both of which include attractive display boxes to hold the kits while growing, and both of which require little other than regular watering. Unfortunately, the product descriptions don’t say which oyster species these grow. The Pink Oyster Mushroom Grow Kit by Forest Origins does indeed grow pink oysters, one of the more difficult varieties to find in stores. If you want Golden Oyster Mushrooms, I would go with the Root Mushroom Farm Kit for Golden Oysters. The Oyster Mushroom Growing Kit from the Imaginary Farmer—Premium Edition produces phoenix oysters. It’s a little different than most kits in that the growth medium does not come inoculated. The buyer must order spawn separately and then mix the kit materials, the spawn, some coffee grounds, and water. The advantage is there is no danger of the mycelium dying before the kit can be used, as can happen when ready-to-grow kits sit on the shelf for too long.

Oyster kits can fruit in as little as a week after being hydrated, and some can produce two, three, or even four flushes.

In a hurry? This is my favorite Grow Kit for Oyster Mushrooms

Shiitake are brownish, gilled mushrooms that grow on dead wood and are famed for their delicate, rich flavor. Their stems have an interesting texture that can be shredded rather like some meats.

The Shiitake Mushroom Kit—Grow Edible Mushrooms by Fungi Perfecti is reportedly extremely reliable and can flush several times over three or four months, up to several pounds of mushrooms total. Some people may find it easier to grow Shiitake Mushrooms outdoors on hardwood logs with spawn and plug/dowels.

In a hurry? This is my favorite Grow Kit for Shiitake Mushrooms

Morels are a group of species that share a curious structure; they don’t have gills. Instead, the outer surface of the cap is deeply pitted, rather like honeycomb, and the spores are released from inside the pits. Size and color vary, depending on species, but morels are famed for their flavor—places where morels grow wild are often closely-guarded secrets. Several other groups of mushrooms (the false morels, the early morels, and, to a lesser extent, some of the stinkhorns) resemble morels but are of debatable safety as table fare.

Morels can’t be cultivated in a simple block indoors, so standard ready-to-grow kits aren’t an option. The Morel Habitat Kit—Backyard Morel Mushroom Growing Kit instead contains spawn and careful instructions for starting an outdoor garden. The garden may take several months to begin fruiting, and success depends on climate to some extent, but the kit is a good way to gain access to one of the choicest species out there.

Lion’s Mane Mushrooms are almost as fun to look at as they are to eat; fans of Star Trek will notice these mushrooms bear a striking resemblance to tribbles (except for being white or whitish) as they have long fur! Fortunately, the “fur” is soft and not hair-like in the mouth at all. The mushroom has a curiously fishy taste that somewhat suggests crab or lobster. “Lion’s mane” is sometimes also used to refer to any of several other furry, edible mushrooms, all closely related.

The Lion’s Mane Mushroom Kit by the Michigan Mushroom Company Is a simple, no-frills kit. The flushes are not huge but are very reliable.

In a hurry? This is my favorite Grow Kit for Lions Mane Mushrooms.

The Maitake is also called the hen-of-the-woods, a name easily confused with that of the not-otherwise-similar chicken-of-the-woods and the only slightly similar rooster-of-the-woods. Best to call it maitake! The fruiting body takes the form of a large rosette of pale gray leaf-like structures with tiny pores, rather than gills, on the undersides. In the wild it grows on tree stumps and the bases of dead trees. It is reported to have strong medicinal powers and is popular for both its health benefits and its taste.

The Maitake Mushroom Garden Patch by Fungi Perfecti is a ready-to-grow kit that anyone can use. It does need to be misted twice a day, so it does require some attention. The first flush may take up to a month to appear.

In a hurry? This is my favorite Grow Kit for Maitake Mushrooms.

Portabellos are large, brown mushrooms that can be grilled like steaks. Criminis are small, brown mushrooms with a dense texture and a rich yet mild flavor. White buttons are what most Americans mean when they talk about eating mushrooms—it’s what goes on a standard mushroom pizza.

It may surprise some readers to learn that these are all the same species. A crimini becomes a portabello if it isn’t harvested early, and a white button is simply a cultivar of a crimini. The story goes that when the DuPont family hired Italian stone masons to build their mansions, the masons brought their wives and the wives brought little portable mushroom gardens to supply their own kitchens—they were growing criminis, and soon developed white buttons to suit the American palate. To this day, 80% of America’s crop of this species is grown in northern Delaware and southeastern Pennsylvania, not far from the great estates of the various DuPonts.

The White Button Mushroom Growing Kit by Willow Mountain Mushrooms is a simple way to grow this species. The first flush should come at around two weeks and the kits will flush several times. The kits cost more than the same mushrooms would at a grocery store, but watching mushrooms grow is fun, and freshness does matter; absolutely fresh portabellos are almost silver in color.

In a hurry? This is my favorite Grow Kit for Culinary Mushrooms.

Enokitakes, also known as enoki mushrooms, are known for their their pale color and very long, thin shape, though the mushrooms are neither when they grow wild; the unusual shape is caused by restricting sunlight and air as the mushrooms grow.

The Enokitake Mushroom Garden Patch by Fungi Perfecti is a great way to get this otherwise hard-to-find delicacy. The kit is a little unusual; it grows best inside the fridge!

In a hurry? This is my favorite Grow Kit for Enokitake Mushrooms.

It’s possible to buy “magic mushroom” grow kits—that is, kits for growing hallucinogenic mushrooms[iii]. Of course, there is the minor caveat that the kits are illegal to use in virtually every jurisdiction everywhere.  The reason the kits themselves are available is that in many jurisdictions there is no law against possessing the spores or mycelium of hallucinogenic mushroom species—only possession of the fruiting bodies is a crime. So a company can produce and sell the kits legally, provided they never allow their fungi to fruit. It’s only the customer who bears the risk of prosecution. It’s also only the customer who bears any risk at all—there is no way to hold a company accountable for a poor or dangerous product if using the product was illegal in the first place.

In a hurry? This is my favorite Grow Kit for All other Culinary Mushrooms.

2 thoughts on “Best Mushroom Growing Kits for Beginners and Experts”