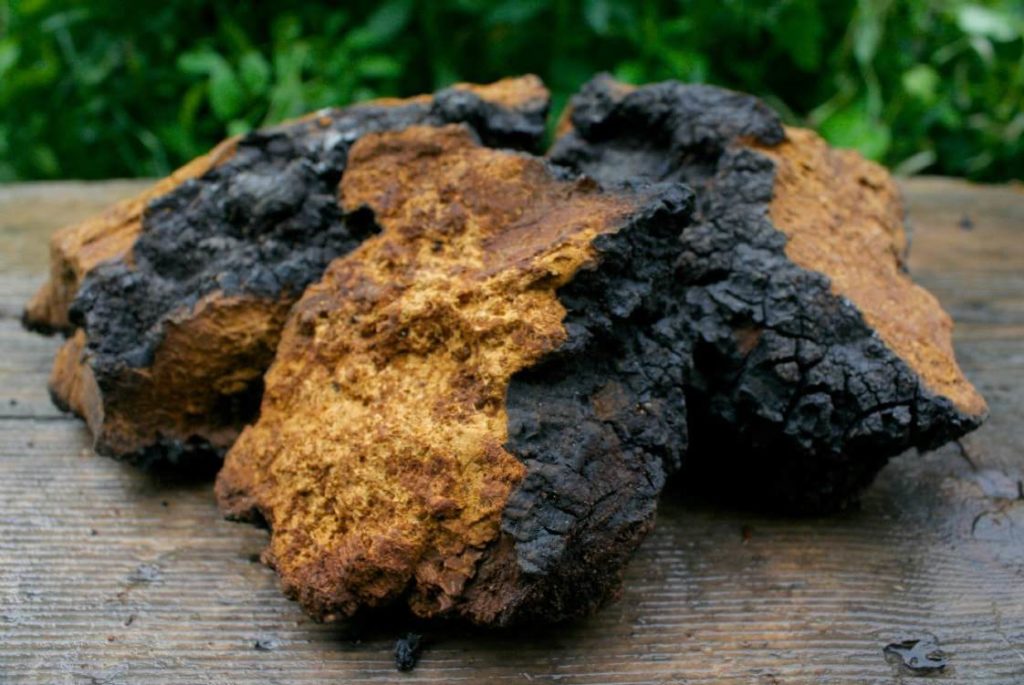 The Chaga mushroom is scientifically known as Inonotus obliquus. It is a fungus that is found primarily on birch trees and prefers colder climates, such as Siberia, Russia, Northern Canada and Northern Europe. In Russia it grows on birch, alder, beech and some other hardwood trees. It is also known as black mass, cinder conk, birch canker polypore, sterile conk trunk rot and clinker polypore. Chaga is a Russian name, and in England and Canada it is called the sterile conk tree rot of birch. It has also been referred to as Fuscoporia obliqua in the literature. Chaga is a parasite of birch, but is saprobic upon the death of a tree, leading to white rot.

In appearance, Chaga is an exotic looking mushroom. It resembles a lump of burnt charcoal, but it is orange inside. The black appearance is due to the vast amount of melanin and results in a mycelium mass. The Chaga mushroom may be considered ugly but it is known to have a wide array of potential health benefits and as such has been in use for centuries in parts of Asia and Siberia. It is now gaining popularity in the western world for these health effects as more and more people turn to natural products and manipulate their properties for medicinal purposes. When being hosted by trees other than birch, Inonotus obliquus may take on a different appearance.

Fruiting body: 25-38cm in diameter and high. Burnt charcoal outside with a bright orange core. The fruiting body emerges from the bark producing basidiospores to infect other vulnerable trees. Irregular outline that protrudes from the tree at first and becomes more concave with age. The flesh has been described as both soft and tough, this may be age dependent.
Smell: Woody, sweet, earthy and aromatic if extracted from live trees.
Gills: No gills.
Taste: Woody and sweet; brewed with hot water and milk or cream, it is described as resembling mocha
Spores: Spores only released upon the death of the tree. Can release spores several times within seven years of the host tree dying. Spores disperse through the air and enter the bark of the new host. Spores form a mycelium, destroying the bark and erupting through the tree.
Edibility: Both interior and exterior of the mushroom are edible.
Habitat: Birch trees primarily; grows in summer and autumn but can be found all year round.

Inonotus obliquus can be easily identified by its soft orange and gold core; this helps to differentiate it from the black knot fungus, which is similar in appearance. Otherwise, it is relatively distinctive.

Mushrooms have throughout history been used in the treatment of disease. They are rich in vitamins, minerals, carbohydrates, proteins, fiber and secondary metabolites. Furthermore, they contain a variety of bio-active molecules such as polysaccharides, phenols, terpenoids, steroids, derivatives of glycoprotein; these, each in their own way, may positively contribute to a variety of health conditions. The Chaga mushroom, now described as Inonotus obliquus belongs to the Hymenochaetaceae family and there is evidence supporting it being medicinally beneficial in cancer, viral infections and glucose disorders, such as diabetes. It may stimulate the immune system and have anti-inflammatory properties; this will be discussed below (Reviewed in [1.]).

Rats that have induced diabetes were fed extracts of Inonotus obliquus specifically, the polysaccharides from the mushroom. These rats received doses of 10mg, 20mg or 30mg for a period of 6 weeks. It was shown that blood glucose levels were reduced in a dose-dependent manner; furthermore, the pancreatic beta-cells damaged by inducing diabetes, saw some restoration [2.]. Another chemically induced diabetic mouse model, fed dry matter extracts taken from Inonotus obliquus culture broth, led to an improvement in serum insulin levels and reduced pancreatic cellular damage [3.]. Collectively, this suggests a role for Inonotus obliquus in moderating blood glucose levels and restoring the effects on the pancreas due to damage from inducing diabetes.

Using a mouse model with melanoma cells, associated with skin cancer, a dose of 20mg/kg/day of aqueous extracts of Inonotus obliquus, reduced tumour growth and prevented proliferation [4.]. The mechanisms behind these effects appear to include the increase in important proteins involved in apoptosis that lead to controlled cell death following the administration of Inonotus obliquus.

Aqueous extracts of Inonotus obliquus have shown their ability to inhibit the proliferation of colorectal cancer in vitro and colon tumours in mice [5.]

An in vitro study of non-small cell lung cancer saw the extracted polysaccharides from Inonotus obliquus inhibit metastatic growth (spread) of the tumour, indicating a role in the prevention of secondary tumour formation [6.]

The evidence here supports a positive role for the administration in vitro and in vivo animal models of Inonotus obliquus in inhibiting the growth of cancer cells and potential spread to secondary tumours. The molecular mechanisms appear to be due to cell-death pathways, leading to inhibition of cancer cell proliferation.

Editors Note: Chaga is in no way a cure or proven method to treat cancer. Always check with your doctor prior to changing any of your cancer treatment protocols.

In another, immuno-suppressed mice received 24 days of aqueous Inonotus obliquus extract, and researchers saw an improvement in the immune response of the mice. These mice had had their immune system suppressed with bone marrow damage, the Inonotus obliquus extract saw a return of some immune cells, to near normal levels [8.]. Furthermore, they saw stimulation of specific immune cell colonies, in addition to an increase in important cytokine molecules – cytokines are essential in regulating immune responses.

Finally, in vitro, lignin complexes extracted from Inonotus obliquus were able to increase the phagocytic activity of macrophages. Macrophages are immune cells that engulf and remove unwanted pathogens and debris in the body and are essential to the immune system response [9.].

The body produces reactive oxygen species (ROS) that are essential in certain pathways however, when uncontrolled they can cause damage to DNA, contribute to pathologies such as diabetes, cancer and cardiovascular disease. Therefore, it is important to have a balance between the production of ROS and removal/scavenging of them. Inonotus obliquus has been shown to moderate the effects of ROS in human fibroblasts [10.]. Freeze dried extracts of Inonotus obliquus have been shown to have a more effective scavenging activity of superoxide radicals even compared to ascorbic acid (Vitamin C); this effect was dose dependent [11.]. Moreover, administration of Inonotus obliquus (100mg/kg) was able to modulate inflammatory responses and cytokine production enabling an appropriate Th1 and Th2 cell response [12.]; essential for a healthy immune response. It is important to note that oxidative stress due to reactive oxygen species, can contribute to aging, cardiovascular disease and stroke. Natural sources rich in anti-oxidants are being heavily researched in an effort to prevent disease and protect the body; the effects observed from Inonotus obliquus are very promising.

Hyperlipidemic rats as a result of a high-fat diet were given between 100 and 500 mg/kg/day of Inonotus obliquus for eight weeks. The results of this study showed that there was a significant decrease in the LDL (bad cholesterol) and triglycerides in the serum. Furthermore, there was a decrease in lipid oxidation by free radicals, caused by the experimental high fat diet. The researchers proposed that the reduction in cholesterol may be due to the anti-oxidant properties of the mushroom [13.]. High cholesterol is a significant factor in cardiovascular disease, and management of levels is important in prevention.

Mice that had induced intestinal inflammation were also given aqueous Inonotus obliquus extract to observe the effects on the inflammation. It was shown that there was a reduction in oedema, mucosal damage and loss of the crypts found in the lining of the intestine. Furthermore, it aided in the suppression of infiltrating immune cells in the colon tissue, preventing further inflammation with the reduction in inflammatory cytokines. This evidence supports a role for seen Inonotus obliquus in reducing the inflammation associated with inflammatory bowel disease [14.].

Platelet aggregation is a complex but necessary process in wound healing; when this process is aberrant, it may lead to conditions such as thrombosis. The ability to suppress the platelet formation may be a step towards therapeutic intervention with thrombosis. Extracts taken from the Inonotus obliquus mycelia, in a mouse model was shown to prevent platelet formation [17.] and may be a potential for the treatment of blood clot disorders. It is very important to note that medical advice should be sought before self-medicating with Inonotus obliquus, as this could potentially lead to excessive bleeding in some conditions.

Rats with induced paw oedema were administered ethanol extractions from Inonotus obliquus, and interestingly there was a reduction in acute swelling and pain when doses of 100mg and 200 mg/kg [18.] were given to the rats.

The Chaga mushroom is traditionally grated and presented as a fine powder which is then served as a herbal tea – representing a decaffeinated version of tea or coffee. It is thought that both warm or cold water with Chaga mushroom extract will release its medicinal properties. There is no evidence from human studies establishing a suitable dosage; therefore, always err on the side of caution.

Whilst there is evidence for medicinal properties, by virtue of the fact Inonotus obliquus can affect blood glucose levels and blood clotting, it is important to receive professional advice from a doctor before self-administrating any mushroom as a therapeutic. This will ensure that there are no contraindications or possibilities of it affecting any drugs already being taken.

There are no known side-effects reported but caution should be demonstrated when first trying Inonotus obliquus. It is noteworthy that long term use may result in kidney stones, due to the high levels of oxalates that are present. Although naturally occurring if there is an excessive amount of oxalate and not enough liquid in the urine, they may form kidney stones.