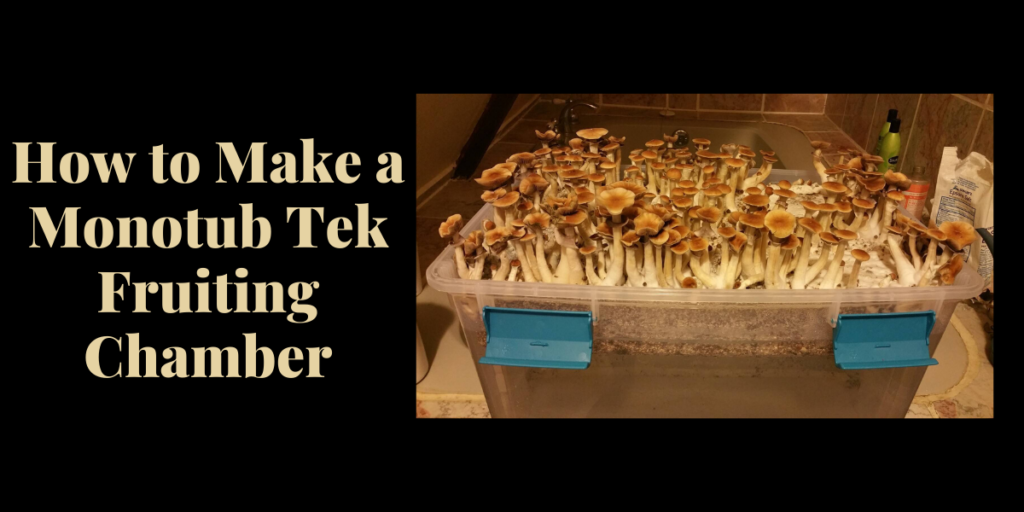 A monotub[i] is a simple but effective fruiting chamber for cultivating or growing magic mushrooms. “Tek” means method or technique (it’s short for “technique”), so monotub tek is simply the method that works with a monotub, as opposed to a shotgun grow chamber.

Monotub tek was developed by growers of (illegal) hallucinogenic mushrooms. Those Species (Ex. Psilocybe Cubensis strains) grow well in composted horse manure mixes, so that is the substrate typically used in monotubs. Several edible species, including crimini/portobello and the ever-popular white button, also feed on manure and can grow well in exactly the same set-up. Alternatively, a monotub can be filled with other substrates—several oyster mushroom species will grow well in monotubs filled with woodchips.

Monotubs are a good option for professional growers who are just starting to establish themselves, since they can yield much larger harvests than mushroom grow kits, but don’t require the investment of industrial scale. And as business increases, it’s easy to just add more monotubs. Another advantage is that, unlike mushroom grow bags, monotubs are re-usable, so there is less waste.

A monotub is basically a large, plastic tub with air-holes in it. What follows is a basic guide for building a monotub. Actually using the monotub to grow mushrooms is fairly simple and straightforward, but it’s beyond the scope of this article. 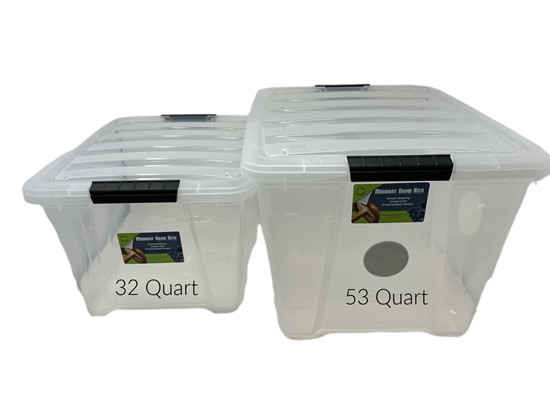 This is our favorite Monotub Fruiting Chamber

Step by Step Instructions on Creating a Monotub Tek

There are many possible variations on monotub construction. This version is workable and simple, but growers should feel free to improvise.

Note that it’s possible to use an opaque tub, but then a window must be cut in the lid and covered with some translucent material. Fungi don’t need light for energy, the way plants do, but they do need to find out where the outside of the substrate is so they know where to form mushrooms, and light is an indication of “outside.” Most fungi don’t fruit in utter darkness.

Step 2. Paint the Lower Half of the Tub Black

Paint only the outside of the tub, and only the lower half—the tub will be filled with substrate up to the paint line, and the purpose of the paint is to keep light from shining on the substrate except on the top. Without the paint, the fungi will sense the light coming through the sides and will try to make mushrooms up against the tub walls beneath the substrate surface. It’s almost impossible to harvest those mushrooms, and their growth will take energy away from the mushrooms growing at the surface. Painting the tub keeps the fungus from getting confused about where to make mushrooms.

Fungi need to breathe, and they also use fresh air as another indicator of “outside,” meaning that a fungus without adequate access to fresh air won’t fruit, or will produce only poorly-formed mushrooms. Some set-ups include fans to increase air exchange, but the holes should be adequate. The rule of thumb is one hole per eight inches of length, meaning a three-foot-long tub needs

four or five holes in each long side, plus at least one hole on each short side. Remember to put the holes above the paint line only!

Each hole should be two inches across. They can be drilled with a power-drill using a hole-saw attachment, or cut by hand using a pair of scissors or gardening snips.

Make sure your holes are above where your substrate will be.

Step 4: Seal the Holes with Poly-Fill

The whole reason to use a fruiting chamber rather than an open tub is to prevent spores from other fungi coming in and contaminating the substrate. Such contaminants are essentially weeds, and just as in gardening for plants, weeds are a problem because they compete with the crop for resources. Plus, if the weed fruits and its mushrooms happen to resemble the crop, they might be harvested by mistake—a serious problem if the weed is toxic! And, unlike with plants, weed fungi can’t be pulled out because their mycelia cannot be removed from the substrate or disentangled from the crop’s mycelium. Weeds must simply be excluded from the beginning, which is why the inside of the fruiting chamber and the substrate must be sterilized before use. So, how to keep weed spores from coming in through the air-holes?

Some sort of microfilter is necessary, and one of the simplest options is to just stuff some poly-fill in each hole. It admits air but not spores. Use heavy-duty tape to keep the fill in place.

Lastly if a Monotub Tek seems too complicated for you, look into PF Tek, Dub Tub Tek, or WBS Tek.

This is our favorite Monotub Fruiting Chamber