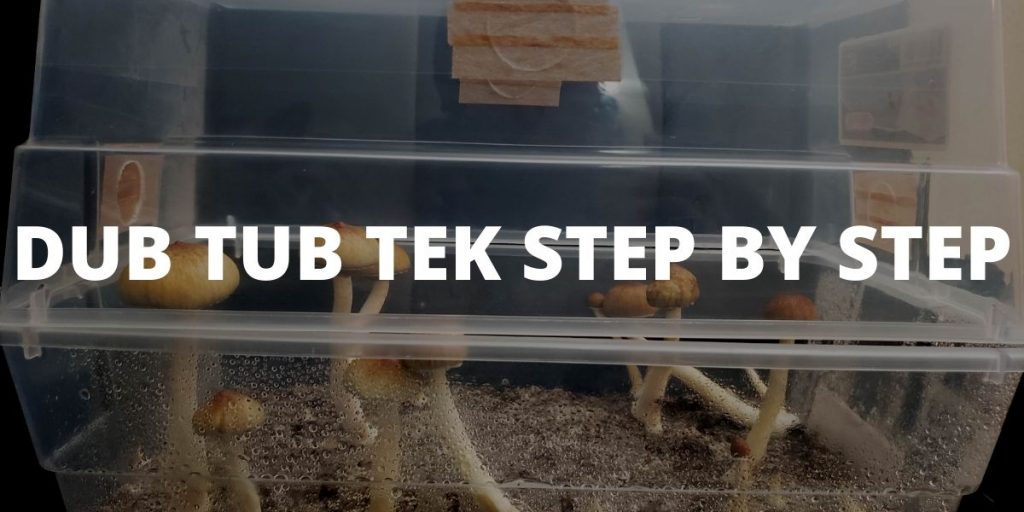 Dub tub is very much like monotub tek except, as the name implies, monotub uses only a single tub.

In both, mushroom spawn previously grown on some kind of grain is used to inoculate a tub full of bulk substrate in order to increase yield. The tub not only contains the substrate, it also contains the air above the substrate, making it possible to control carbon dioxide level and humidity in order to induce fruiting. The tub is a miniature growing chamber. In monotub tek and SGFC, the tub has a lid. In dub tub a second tub is placed upside-down on top of the first instead of a lid. That’s it, that’s the only difference, except that with dub tub it’s not necessary to open the tub as often.

There are many possible variations (size of the tubs, type of substrate, and so forth, but we can provide a step-by-step guide for one version of the method[i].

Why Use Dub Tub Tek?

Dub tub, like any other cultivation technique, has its pros and cons. The first question is whether to spawn to bulk at all, as opposed to fruiting directly from jars of grain or birthing cakes. The second question, once one has decided to spawn to bulk, is whether to use monotub or dub tub tek.

Beginners to growing magic mushrooms are usually directed towards some version of cakes, PF Tek being one of the most popular and reliable. There are several advantages to cakes:

There are also several advantages to bulk[ii]:

The advantages of a dub tub are height and stability[iii].

A monotub of the same width and length will be half as tall (and some of that space will be occupied by substrate) as a dub tub set-up, and with smaller tubs and larger strains, mushrooms can bump up against the lid. They will then either turn and grow sideways and tangle themselves up (complicating harvest), or they will push the lid off, ruining your humidity control. Dub tubs don’t have that problem.

Dub tubs also have a much more stable internal climate. Having more air-space inside, they don’t need to be opened as often for ventilation, meaning more of the humidity stays inside where it belongs.

The only real disadvantages are that you need to buy twice as many tubs—that can get expensive—and if you’ve got multiple tub-set-ups going at once, dub tubs don’t stack neatly.

How to Make a Dub Tub Tek

Before spawning to bulk, the mycelium must first be grown on grain in jars. We’re not going to include instructions for that here, since we’ve already covered that under Wild Bird Seed Tek and other articles. Note that the following recipe and instructions are for four six-quart tub set-ups. There is no reason you can’t use tubs that are larger or smaller than six quarts, and no reason you can’t do just one at a time—or more than four at a time. You’ll just have to adjust the math of the recipes if you want to make these basically arbitrary decisions differently and we have.

Next, prepare the substrate.

Now it’s time to load up the tubs.

Next come casing and fruiting—and the use of those other tubs!  Casing means covering the colonized substrate with a layer of some non-nutritive material in order to help retain moisture (check with a hygrometer) and further protect against contamination.

Pinning should begin within 14 days, but do not cease misting and fanning until the mushrooms are ready for harvest. After the harvest is complete, then “dunk” substrate to trigger the next flush. The procedure is to weight the substrate (being fully-colonized, it will act like a giant cake and could float) and then pour in enough water to cover. Let sit 24 hours, then pour the water out and return to misting and fanning. You should get several flushes before you have to start over with new substrate.

If you find the Dub Tub too complicated you might want to look into growing kits or grow bags.