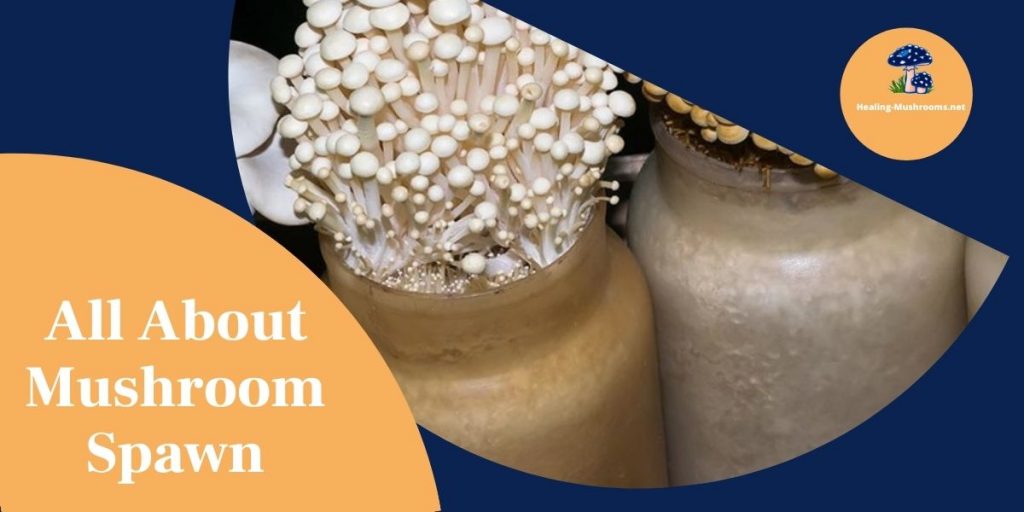 What is mushroom spawn? The short answer is that it’s the “seed” used to start growing mushrooms—except that mushrooms don’t actually have seeds. Fungi are not plants, and their life cycles and needs are not like those of plants. To avoid confusion, let’s go over the basics before discussing the types of mushroom spawn and how to choose the best mushroom spawn for your operation[i].

A fungus spends most of its life as a network of fine, almost invisible threads growing throughout whatever the fungus is eating (that fungi must eat is a major way they differ from plants). An individual thread is called a hypha (the plural is hyphae), and the whole network is called the mycelium. Usually, the word “mycelium” is also used as a synonym of “hyphae,” as in “this supplement was made from mycelium.” A mushroom is the fruiting body of the fungus—that is, it’s an organ that grows out of the mycelium in order to produce spores.

There are types of fungus whose fruiting bodies are not mushrooms (the black-tipped fuzz that sometimes appears on rotting food is a non-mushroom fungal fruiting body) but we’re focusing on mushrooms right now.

Each spore has the potential to sprout a new mycelium, but a spore is not a seed. The seed of a plant is rather like an egg—it contains an embryo that is the result of sexual reproduction between the parent plants (plant sex works a bit differently than animal sex, and is a fascinating topic, but again we are focusing on mushrooms right now). In contrast, the production of spores is asexual. Mushrooms are not sexual organs. Fungi do mate, but they do so by joining hyphae tips. The baby then grows a new mycelium out from that point of joining.

One way mycologists can check whether two very similar-looking fungi belong to the same species is by letting their mycelia grow together to see if they mate (the test is more difficult than it sounds because fungi have more than two sexes or “mating types,” and not all types will mate together).

Spores are difficult to grow, and mushroom sex is complicated, which is why mushroom growers don’t usually plant spores. They plant spawn. Or, more precisely, they inoculate an appropriate substrate with spawn.

Spawn is a small mycelium and its food. Introducing spawn to a larger batch of food is an important step on the way to a nice crop of mushrooms.

The Life Cycle of the Cultivated Mushroom

Mushroom growers do not start by simply planting spores in a suitable substrate. Instead, they use a multi-step process that gives them more control. There are many possible variations on the process, depending on the resources and interests of the grower, but a basic overview should help the reader not get lost in the detail of the various options[ii].

A grower might put spores from different strains of the same species onto a sterile agar plate. The agar mixture is there as a food source. The spores will germinate and mate, producing a new genetic individual—a new strain. The advantage of starting with an agar plate, not some other substrate, is that the growth of the young mycelium is easy to see, and if any other fungi or any bacteria start growing (weeds in the garden, essentially), or if any other problem develops, it’s obvious. Starting over at this stage does not cost a lot of money or waste much substrate.

Once the plate is fully colonized, the young mycelium can be used to inoculate a small amount of a substrate, such as sawdust or grain—this inoculated substrate is spawn. Many batches of spawn can be made from the same strain relatively quickly.

The entire process must be kept sterile—the fungus the grower wants must be the only living thing in any of these substrates—because mushroom gardens are impossible to weed. Once an unwanted fungus or bacterial strain gets in, the only option is the abandon the batch and start over.

Many growers, especially hobbyists, start by buying ready-made spawn or even grow bags, since that means not having to deal with agar plates or spores. Most mushroom-growing kits eliminate yet another step—the user buys inoculated bulk substrate, adds water, and then simply watches as the fungus fruits.

Spawn can be made with various types of substrate, such as sawdust or grain. Since most cultivated mushroom species can use all the common substrate types, “type of spawn” refers to the type of substrate, not to the species of the mycelium. Each type has its advantages and disadvantages.

Sawdust spawn usually uses hardwood sawdust within a specific size range—the individual dust particles should not be too big or too small. It’s very versatile, useful for inoculating many other types of substrate, and since mycelium can colonize sawdust very quickly, the spawn is less likely to get contaminated. There isn’t time for weeds to take hold.

While plain sawdust makes fine spawn, it works less well as a substrate for fruiting, since it has less nitrogen than many species need to produce well. Sawdust is often used as an ingredient in mixed bulk substrates, such as sawdust and bran, but seldom as a pure bulk substrate.

Grain spawn can be made with virtually any type of grain or a mix of grains. Rye and millet are both popular. Grain spawn is a good option for inoculating all types of indoor grow set-ups, and grain provides better nutrition for the growing fungus than sawdust does. The only major problem is that birds and rodents like grain, too, and will happily dig up and eat any grain spawn used outside. Grain spawn is usually used in PF Tek for growing magic mushrooms.

Plug spawn uses wooden dowels—either made of solid wood or of compressed sawdust—as the substrate. They are most often used to inoculate solid wooden logs. Simply drill a hole in the log and insert a plug. Plug spawn can also be used to inoculate other substrate types, especially those made of wood fiber, like cardboard. Plug spawn does not do as well for grain or straw.

Liquid spawn is not really spawn—it is not a substrate colonized by mycelium. Instead, is it water mixed with either spores or a mycelium slurry. It, too, can be used to inoculate substrates, though.

Other Types of Spawn

Anything that can be used as a growth substrate can also be used as a spawn substrate, including both woodchips and straw. Some people also attempt to get the mycelium to fruit from spawn, without using additional fruiting substrate. That can work, although the fungus seldom has enough energy to fruit well, since spawn does not contain a lot of food.

The Best Mushroom Spawn to Use

The choice of what type of spawn to use depends on the type of mushroom being grown, the type of substrate, and the specific growing method. Generally, the spawn should use a similar material to the fruiting substrate—for example, if planning on growing on grain, use grain spawn. If planning to use a sawdust and bran mix, use sawdust spawn. That way, the mycelium stays on a diet that it has been proven to like.

As noted, grain spawn should not be used for outdoor beds, lest mice eat it, and plugs are a good (but not the only) choice for wooden logs and stumps.

Not all grains are equal for use in grain spawn[iii]. Rye is considered the gold standard because it has a good nutritional balance, holds a lot of water, and the grains hold their shape. The problem for the hobbyist is that whole rye grain is not available in grocery stores, or anywhere else, in small, convenient quantities. Wheat is almost as good, and is available in convenient small batches in health-food stores. Millet has the advantage of very small size; mycelium can colonize it very quickly. It’s good to mix with other grains. Sorghum is useful for commercial-scale growers because it is inexpensive. Barley, brown rice, and popcorn (whole, not popped!) all work well enough for use by hobbyists and are readily available in small batches. The seed mixes sold to feed birds (often called wild bird seed, or WBS) also make good, convenient grain spawn for use at a hobbyist, provided the mix does not contain sunflower seed hulls.

White rice is not recommended for use in grain spawn at all since it is too sticky and easily becomes unmanageable.

The bottom line is that there is no one best mushroom spawn except the one that meets the specific needs of the grower.

Wherever kind of spawn is used, it should be used soon. If not given new substrate, over time the mycelium will use up its food supply and will also get clogged by its own waste products. Unlike animals, fungi cannot get up and go to the toilet! Spawn should usually be used within two months of purchase.

Now that you’ve figured out which Mushroom Spawn is going to be best for your application, it’s important to choose a reputable supplier. Choosing the right supplier is important because you want to ensure their methods were sterile, leading to a higher rate of success for your mushrooms.

I personally use BetterFungi. The pictures don’t do their product justice. They have excellent Spawn and a huge selection, from plug to grain spawn. Give them a try.