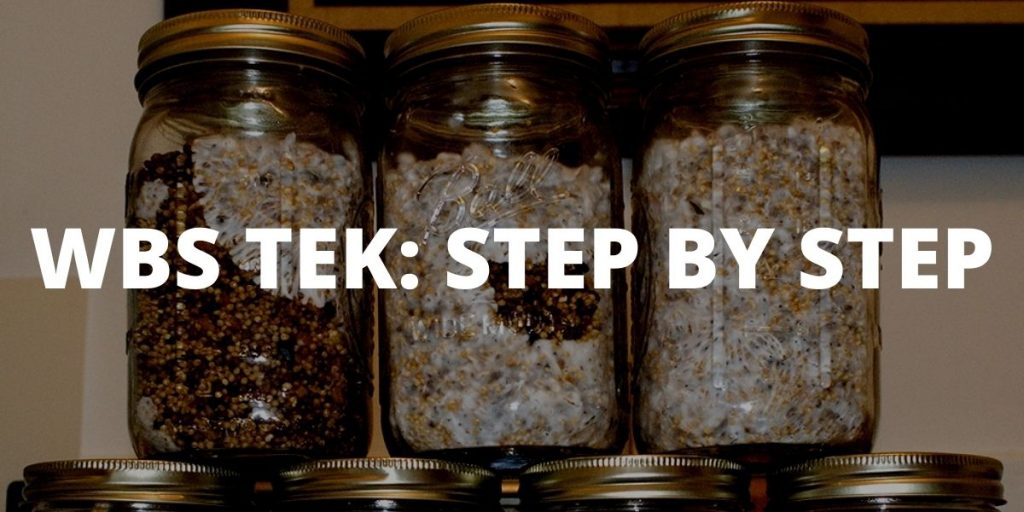 Most cultivation methods involve making sterile jars of some kind of grain, injecting an appropriate liquid spore culture, and then allowing the mycelium to colonize the grain. Once the jars are fully colonized, the grain can be used to colonize a bulk medium, such as manure or straw, for a higher yield, or the colonized grain can be encouraged to fruit, either in the jars or not. Popular grains include brown rice flour, popcorn, or millet. A good birdseed mix is mostly millet and has the advantage of being easily available at very low cost.

Of course, each kind of grain requires its own tweak to the basic method. WBS tek is just any method that works well for wild bird seed mixes. The following is one version of WBS tek[i].

Why Use WBS Tek?

Why not use WBS tek? For many people, the choice of tek is close to arbitrary in that all methods are similar and, if done correctly, produce a good crop of shrooms[ii]. The important thing, especially for inexperienced growers, is to use some established method; hybrid teks invented on the fly by newbies tend not to work.

That being said, there are differences between methods that do make a difference. Some methods work better for certain circumstances, and for certain people, than others.

WBS tek is not usually recommended for first-time growers, since small mistakes are more likely to lead to crop failure than in, say PF tek with brown rice flour (BRF). But for those with a little experience behind them, using birdseed results in faster colonization time and greater yield[iii].

Some mushroom strains do have their own preferences, though. A strain that really only does well on BRF is a poor candidate for WBS. Give the mycelium what it wants.

The first thing to do when growing mushrooms is to gather all necessary supplies. Getting halfway through the process only to realize some key ingredient is missing would be a real problem.

If the jars have not yet been prepped for mushroom growing, you’ll also need:

Are the jar lids prepped yet? If not, that must be done first.

Note that while it’s possible to drill a hole in a whole stack of lids at once, doing so is a good way to get injured.

Now, on to the next steps.

Lastly, if WBS Tek seems too complicated for your skillset you can try using growing kits, grow bags or even other grow methods like Monotub Tek, and Shotgun Fruiting Chamber (SGFC).