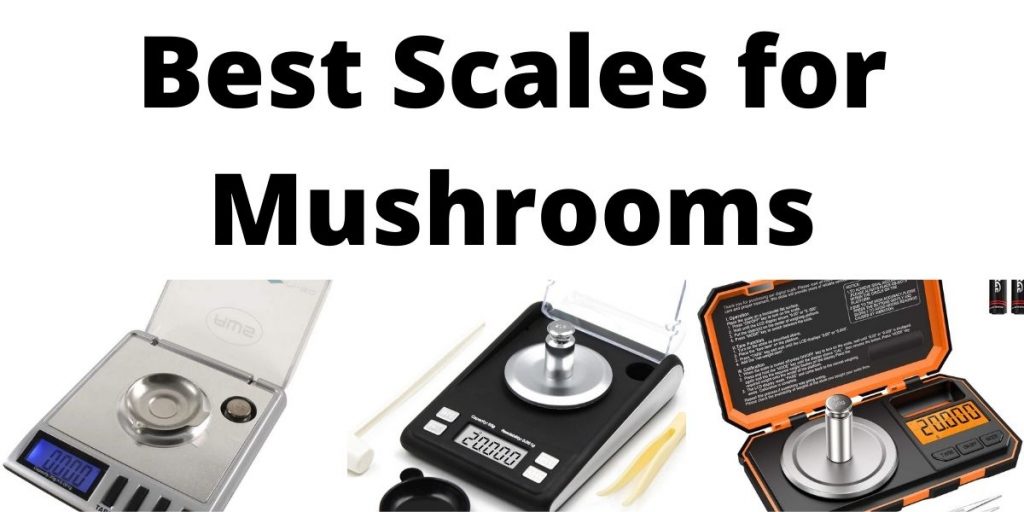 One piece of equipment most users of psychoactive mushrooms need is a scale. People interested in producing their own extracts of medicinal mushrooms will likely find one handy, too. But not just any scale will do. For a few tips on how to find a good scale, plus brief reviews on some of the most popular models[i], read on.

Just please note that while most mushrooms getting weighed by the milligram are the kind that contains psilocybin, using those mushrooms—or sometimes even possessing them—is extremely illegal in most jurisdictions. Know the law in your area, and do not use anything in this article to get yourself sent to prison.

Why Do You Need a Scale?

Simply put, the effects of “magic mushrooms” is dose-dependent. Depending on what variety and species you’re using, the difference between a safe and pleasant trip on the one hand and a psychologically dangerous overdose could be a gram or less. People looking to microdose have to be even more careful not to get too much or too little. Such fine gradations can’t be eyeballed—unless you want to be dependent on someone else to measure out your doses, you need a scale of your own.

Although psilocybin enthusiasts probably do most of the mushroom-measuring, anyone measuring out doses of concentrated extracts or microdosing any species (such as lion’s mane) will need a highly accurate scale.

Things to Consider When Buying a Scale

There are two questions to ask when considering which scale to buy—how well does the scale work, and what sort of scale is it?

How Well Does the Scale Work?

How well a scale works depends on three separate characteristics. It’s important to understand all three, first because a scale could do very well in one respect and not as well in another, and second because your priorities will vary depending on your specific needs. These three characteristics are precision, accuracy, and quality.

Precision means how small a distinction an instrument can make. Accuracy means how reliable the instrument’s readings are. For example, the scale patients step on at a doctor’s office must give the correct weight every time. It can’t be five pounds off, or give a weight of 143 pounds and then give the same person a weight of 146 pounds two minutes later, as many bathroom scales do. But it doesn’t need to be able to give a person’s weight in ounces because such fine gradations don’t matter when weighing human adults. A doctor’s scale must be accurate but need not be precise. A mushroom scale must be both accurate and precise, because mushroom doses are very small.

A confusing point here is that although accuracy and precision are different, sellers often refer to precision as “accuracy,” and the way to talk about precision is to say what the scale is accurate to. Case in point: for weighing mushrooms, you’ll want a scale that is accurate to within a tenth of a gram (0.1g) or, better yet, a hundredth of a gram (0.01). That’s precision.

Precision without accuracy is possible, but useless. Get the most accurate scale you can afford.

Get the best-quality, most durable scale you can afford, especially if you plan to travel with it.

What Sort of Scale Is It?

Scales vary in their capacity, their portability, and whether they come already calibrated or not, among other characteristics. There are also multiple types or categories of scale.

Capacity means how much a scale can weigh. In general, the more precise a scale is, the lower its capacity is likely to be. You won’t find a scale that can give you your weight in milligrams, for instance! Most scales with the precision you need for mushrooms can’t weigh more than 100g at a time, and that will be good enough for most users. Higher capacities are possible, though, with some able to handle up to 500g. If you’re a grower interested in figuring out how many doses your latest crop has yielded, you’ll want a higher capacity.

Portability is all about size and quality. If you’re traveling with your scale, you’ll want something that fits in a pocket and still works when you take it out of your pocket. An easily portable scale is less likely to have a high capacity, though.

Inexpensive scales tend to need to be calibrated by the user—that is, set so that when nothing is on the scale they read zero, not some other number. Higher-end models usually come factory-calibrated. But that’s not because factory calibration is inherently better (though it is more convenient). Rather, lower-quality scales don’t stay calibrated very long, so the user has to be able to re-calibrate them as needed.

Most mushroom users will want either a pocket scale (very small, often with a protective cover that doubles as a tray) or a platform scale, also called a kitchen scale (less portable, but able to weigh larger items). Some kitchen scales will not be precise enough for weighing mushrooms by the dose. Powder scales are way more precise than most people need, but there are exceptions. Stealth scales are designed to look like something other than a scale (a book, perhaps), but they tend to be less accurate than otherwise-similar standard scales are.

The Top 5 Scales for Weighing Mushrooms

Here are brief reviews of five popular scales suitable for weighing mushrooms. Note that these are mostly low-cost models, meaning that accuracy can vary a bit and damage during shipping is not all that uncommon. However, these models are popular because for many people they are good enough, and higher quality is not worth the higher price. Such decisions always involve weighing options and making trade-offs. The idea is to make the best compromise possible among competing values.

These are in no particular order. 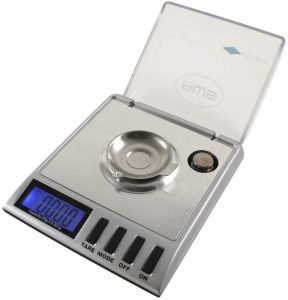 The Gemini-20 is a portable scale that can weigh up to 20 g and is reported to be accurate to within 0.001g—although that is a measure of precision, not accuracy. It’s accuracy is somewhat variable. It does need to be calibrated upon purchase. The readout can be switched to show any of six different units, including grams, ounces, carats, or grains. There is a tare feature. Comes with a ten-year warranty. 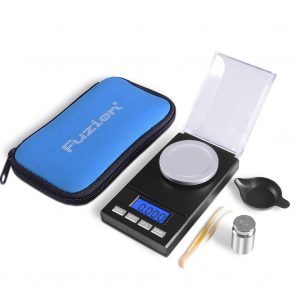 Fuzion’s is a small, easily-portable pocket scale that can handle up to 50g, a precision of 0.001g, and an accuracy of plus or minus 0.003g. Can be switched to any of six units, including grams, ounces, carats and grains. It comes pre-calibrated, though there is an option to re-calibrate if needed. Arrives with a storage case, weighing pan, tweezers, calibration weight, tweezers, and a two-year warranty.  Users report that the scale works much better if one knows certain tricks. For example, like many scales, this one is most accurate at the middle of its range, not with very small or very large quantities, meaning that when measuring very small amounts it’s best not to use the tare function—with the weight of the weighing pan included (and then manually subtracted from the result), the result will be more accurate. 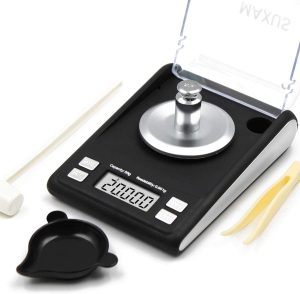 The Dante scale is designed for weighing jewelry, but works well for other uses, including medications and mushrooms. Has a capacity of 50 grams and a precision of 0.001g. Comes with weighing tray, calibration weight, tweezers, scoop, and a ten-year warranty. Can be switched to read in any of six units, including grams, carats, grains, ounces, and pennyweights. The scale is reportedly more accurate than the calibration weight that comes with it, though again it’s helpful to know some tricks. For example, this is another scale where it’s best not to use the tare function with very small weights, especially not when adding just a little weight at a time—the scale might not notice some of the additions. Including the weight of the tray solves the problem. 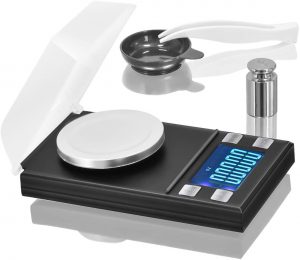 A very portable pocket scale with a maximum capacity of 50g and a precision of 0.001g. Reportedly, the accuracy varies, with some users saying it is very accurate and others saying it won’t hold its calibration. It does need to be calibrated upon purchase. Can show any of six units of measure, including grams, ounces, carats, and grains. 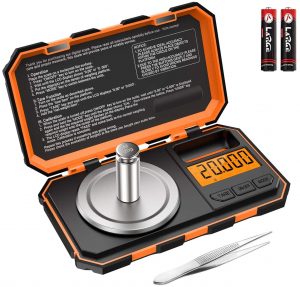 The Brifit is a portable scale with a sturdy clamshell design (that is, it folds up like a flip-phone), with a maximum capacity of 20g and a precision of 0.001g. It comes with a battery (and tweezers), but it’s often better to start with a fresh battery purchased separately. The scale is very sensitive, to the point of literally being able to register the user’s breath, so it’s important to minimize air currents when a lot of accuracy is needed—otherwise the results jump around with every passing breeze.