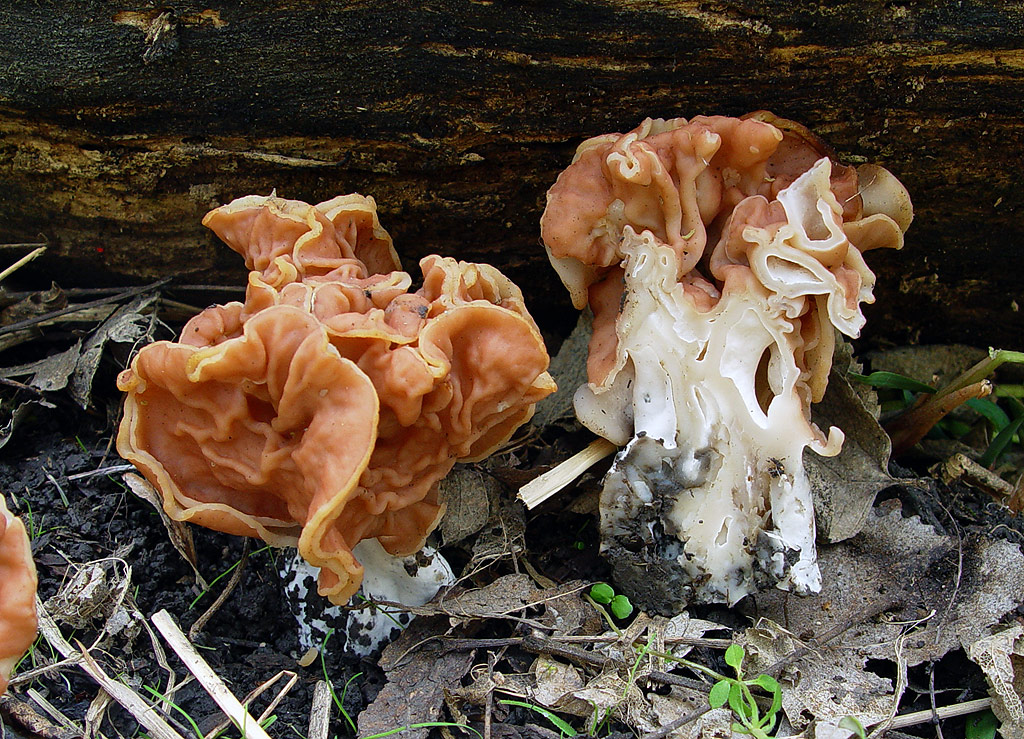 Gyromitra brunnea is a unique false morel that grows in Eastern and Midwestern parts of the United States during the spring. These mushrooms are large and stocky and have a distinctive reddish-brown multi-lobed cap as well as characteristics white seams that run along the edges of their lobes, which both help to set them apart from other false morel species.

Cap: The cap of this species is 3 to 9 cm thick and 5 to 10 cm wide. Generally, the cap is everted with several(2-5) lobes that curve upward, away from the center of the mushroom, sometimes resembling “elephant ears” or forming a saddle-shaped structure. The surface of the lobes is loosely wrinkled, while the edges have seam-like lines. In color, the lobes are tan to pinkish-brown or reddish-brown.
Undersurface: The undersurface is whitish, yellowish-grey, or tan.
Flesh: The flesh of the cap is brittle and crumbles easily, and is whitish or pale rose-colored.
Stem:  The stem of G. brunnea is 9 centimeters tall and 2 to 5 cm thick. It has a somewhat irregular shape with a bulbous dilation towards the base. The stem is light pink to white in color and looks solid when viewed from the outside, but upon sectioning the stem lengthwise a hollow, convoluted chamber can instead be seen.
Spores: The spores are Spores 23-30 x 10-15 micrometers in size.
Edibility: There is much debate regarding the edibility of this particular species in various mycological texts. Most guides and scientific mycological literature state that its edibility is questionable and recommends against eating them. Therefore, to rather be safe than sorry, Gyromitra brunnea is considered inedible and possibly poisonous.
Habitat: G. brunnea is both saprophytic (grows on and decays dead organic vegetation) as well as mycorrhizal (a mutualistic relationship with tree roots where an exchange of hard-to-get nutrients and provided by the mushroom to the tree, while the tree provides the mushroom with end products of photosynthesis) at different stages of its life, similar to many morels. It can be found growing solitarily or scattered on soil and well-decayed wood stumps and fallen trees in hardwood forests. of Midwestern and Eastern United States as well as Southern Canada.
Range: Found across much of midwestern and Eastern United States in states such as Illinois, Indiana, Iowa, Kansas, Michigan, Minnesota, Missouri, Nebraska, North Dakota, Ohio, South Dakota, Wisconsin, North Carolina, South Carolina, Georgia, and Pennsylvania as well as others.

As mentioned above, the toxicity of this species is questionable, with mycological text reporting is as inedible and capable of causing typical Gyromitrin syndrome, while anecdotal evidence seems to suggest that certain individuals may be able to consume this species. However, it is always better to err on the side of caution and avoid the consumption of this particular mushroom.

Gyromitrin Syndrome refers to the collection of symptoms and signs that develop after ingestion of certain Gyromitra mushrooms, possibly including G. brunnea. These species contain a chemical, gyromitrin, which upon ingestion is metabolized to an active intermediate, monomethyl hydrazine (MMH). MMH is a potent inhibitor of many enzymatic processes, particularly in the central nervous system, and is also capable of doing direct cytotoxic damage to cells of the liver and kidney. The symptoms and signs of gyromitrin toxicity appear usually 5 to 12 hours after ingestion but may occur sooner depending on the amount consumed and individual susceptibility. The most common complaints include abdominal pain, diarrhea, vomiting, coma, seizures, delirium, fever, headache, restlessness, and respiratory failure. Hepatic and renal damage leading to jaundice, uremia, and even death is also possible in severe cases. Medical help should be sought as soon as possible as supportive therapy is often necessary.